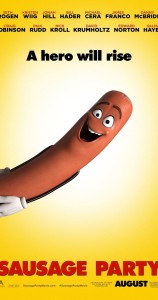 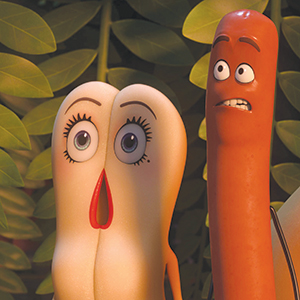 A hilarious raunchy comedy about food products exploring the world of sex while asking questions about life outside of the store.

This movie is great fun! It’s got all the energy and cleverness of one of the better Seth Rogen movies (Superbad, This is the End,) only here they are channeled through animation. And through food products. Rogen loves trying new things and with this movie he raps into something super clever and filled with potential. The R rating really puts this movie in a different playing field than anything else that might be like it, (any animated film where objects are compared to humans, such as Toy Story.) Sausage Patty stands on its own. The story isn’t great, but the jokes most certainly are.

There are some filmmakers and talents out there that keep trying their hand at something new, branching out in whatever ways possible, every chance they can get. These guys are not only unafraid of failure, but they basically court it, challenging the public to not come and see their movies. Names like Wes Anderson, Quentin Tarsntino, and now Seth Rogen come to mind.

Now, Rogen is certainly the most odd name on that list. After all, the man is known as a goofy comedic actor more than anything else. But he is also a writer and director. And some of the best and most creative projects to come out of Rogen’s camp have been movies that he wrote himself. This Is The End was the first, and now there’s Sausage Party following it up. Two movies that took very basic concepts and put them under the scope of meta-self-realization. All while maintaining a strong level of humor.

Sausage Party is an animated film about food in a supermarket. But if you think this one is for kids, you are sorely mistaken. The movie comes out of the gates running, with tons of curses and sex talk. The idea here is that these packaged food items want to be taken off the shelves and put into people’s homes. But they also want to get together with each other. In particular, the hot dogs want to get with, and put themselves inside of, the buns.

Of course this movie makes all of the hot dogs male and the buns female. And, as a representation of male and female anatomy parts, you can imagine how the film makes the buns look. Especially when they start talking. But it’s the content that these characters discuss, and the play on words and metaphors, which keep this movie going strong throughout its duration.

The storyline itself is kind of limited. This movie knows that a good comedy doesn’t need to have a great story. It just needs to be funny and unpredictable. Here, the fantasy for all of these items is to get out of the store, and go home with people for a better life. It’s kind of like dogs at an animal shelter. Only in the case of the dogs, being adopted means being taken into the family. In the case of the food, it means being prepared for a meal and then eaten. Some of the characters who do make it out of the store learn this the hard way.

The real storyline gets started when an attractive woman walks down the aisle putting things into her cart. Her physical appearance is only important because an item that is a douche bag (called the Douche, and voiced by Nick Kroll,) wants to get with her. The woman has got hot dogs, buns, mustard, the Douche and some other things in her cart. Only mustard (voiced by Danny McBride,) knows the truth about the outside world and so he fights to get out of the cart. This fight leads to a whole bunch of characters falling out.

One of the hot dogs, named Frank (Rogen,) and one of the buns named Brenda (Kristin Wiig,) are among these items. So is the Douche. He blames them for what happened and is furious that the woman will no longer be taking him home. The Douche becomes the villain, swearing revenge on the characters who made him fall from the cart. Meanwhile, Frank and Brenda go wandering through the aisles looking to get back to their spots. They are joined by some other fun characters including a Jewish bagel (voiced by Edward Norton, doing an impression of Woody Allen,) an Arabic falafel, and a lesbian taco. The bagel and the falafel constantly bicker about having to share the shelf, making comparisons to Jewish and Arabic people having to share Israel. The lesbian taco wants to get with Brenda.

While all this is going on, some of the characters were indeed taken out of the store and into the woman’s home. The whole package of hot dogs, minus Frank, made it. This includes Jonah hill and Michael Cera, (the Superbad costars, back together again,) and a whole bunch of potatoes. When the potatoes start getting peeled, the hot dogs make a run for it and try to escape out the window.

Back at the store, the Douche is on the hunt. The Clerk (Paul Rudd,) is throwing things away that are damaged. To avoid this fate, the Douche kills another character (a juice box,) and drinks its blood / juice. It’s a combo of a vampire sort of thing, and also taking steroids, with the Douche saying he’s “juicing,” and bulking up as a result.

The movie works because of its humor more than anything else. This one is filled to the brim with witty comparisons between food products and real human situations. It certainly helps that the film is rated R and dives into sex talk and cursing head on. That opens the door to possibilities that are seemingly endless. Rogen and his buddies (the other cast members,) have a blast with one, and pretty much knock it out of the park.