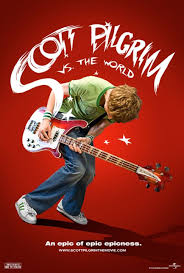 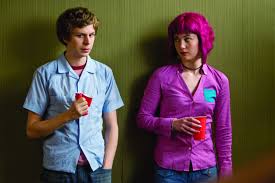 A clever spoof on the young generation that uses the formula and ideas of video games to fuel an action movie with a teen romance storyline.

A very fun and entertaining movie, this one might have a pretty simple story about a guy who has to fight a bunch of ex-boyfriends, but the comedy and cleverness of how this is all done is fantastic. The movie spoofs video game culture to such a high level that it acts more like a tribute than a film making fun of anything. Scott Pilgrim basically lives inside of a video game, and the exes are like guardians. The characters are all pretty funny, including the different girlfriends Scott has and members of his band. But what really works about this movie are the action, effects, and send of humor. They are all top notch.

Scott Pilgrim Vs. The World is an absolute blast of a movie. It’s not that it’s non-stop funny or anything, the truth is that the humor is just okay here. but the movie is so great because of how clever it is and how well it integrates video games into a sort of teenage dating / action movie. the film is about simple scott, a nice guy who sometimes does the wrong thing. who better to play him than simple actor michael cera with his innocent and cute and cuddly way about him. Every performance this guy does is exactly the same and I’m starting to realize that when it comes to comedic actors, that’s not necessarily a bad thing. yes, the actor still has to choose his roles wisely (adam sandler would have been smart to change things up at some point, and jim carrey just couldn’t find the right scripts), but other than that, when something works, why change it? Such is the case with russell brand, seth rogen, danny mcbride, and any other great comedic actor. steve martin and bill murray are two other great examples from an older time.

So Michael cera does his usual simple performance, only this time he is surrounded by a whole world of crazy ideas. the premise of the movie is very simple on the surface. scott meets a nice girl named ramona flowers and starts dating her and then finds out he has to fight each of her seven evil exes. All of her ex lovers are suddenly coming out of the woodwork, one at a time, to fight scott. and I love how the movie isolates them, so that they take him on one at a time throughout various points of the movie, just like guardians at the end of a level in a video game.

While that idea is super cool and creative, it certainly wouldn’t be enough. And so this movie packs in a handful of fun characters in scott’s daily life. there’s his band, sex ba bomb and all of it’s band members and supporters. his sister (anna kendrick, the girl from up in the air), his roomate (kieran culkin, from igby goes down) and even a video store, coffee shop, multi-job girl who is everywhere to be found (the girl from parks and recreation).

And there’s a story about scott dating a girl in high school named Knives Chow and how she is so perfect and kind, but he is much more interested in the mysterious ramona flowers. and so he starts seeing both girls at the same time, not to be an asshole, but because he’s not sure how to break up with knives. It’s a pretty straight to the point plot, but at the same time, I like that it didn’t just start with scott pursuing ramona. the first part of the story involving knives gave us a nice little introduction to all of the characters who occupy scott’s world. and there are quite a few of them, all fun.

Still, the movie doesn’t really get good until the action begins. Scott fights off one opponent at a battle of the bands and then continues on his way. the story goes on with him and ramona going over each others places (one night he goes to her, another night she comes over to him), but mostly it’s just to put time in between the different opponents. and it works. we would have a hard time sitting through fight after fight if they were back to back, and the movie is smart enough to know that and to spread them out.

The thing that makes the fights so special is the graphic design and comic book-like / video-game like slow motion work. the giant “pows” that come on the screen when a character is hit like in the old adam west batman show. only it all happens so much faster than anything from those days. this is the stuff that was inspired by the action of the matrix from ten years ago. it was only a matter of time before it came to this. How great that a movie like this comes out in the same year as inception, another movie that built on the concepts of the matrix, only in a totally different way. scott pilgrim built on the action techniques. inception built on the story ideas.

The action in scott pilgrim vs the world is fantastic and so is the way that each scene and each opponent is totally different from the others. There’s one that takes place on a movie set where the actor everyone is going to see is one of ramona’s exes. then another involves a girl she dated and a fight at a bar that involves giant weapons coming out (straight out of a mortal kombat video game). There’s also a story involving pilgrim’s former ex-girlfriend who went on to be a major rock star, and a guy who plays in her band and just happens to be one of ramona’s exes. He’s played by brandon routh as a sort of superman (get it? He also played that role in bryan singer’s remake a few years ago), super vegan warrior. his eyes and hair go white and he seems to have electricity power. And I love the way all of that is diffused by some humorous ideas involving his being a vegan and how that is patrolled. And then there are twin brothers who fight scott through music generated monsters that take on each other in one of the coolest scenes in the movie. it kind of reminded me of a scene in kung fu hustle where characters play an instrument like a lyre or keyboard and weapons start flying out of it while they are playing. very cool stuff.

There are a slew of great actors on hand here, playing the exes, from routh to chris evans (the former human torch and the new captain america), to jason schwartzman. And despite the humor of the movie (this movie tries it all, including a small tribute to a typical episode of seinfeld), the highlight is still the way it goes after video games and makes their logic work for the supposedly real world. there’s the way a giant “Vs.” comes on the screen whenever scott sets up to fight and the way his opponents turn into coins when he defeats them, which he then collects. there’s the giant “K.O,” that appears in bubble letters when a fight ends and the way a loud voice announces to the audience whenever scott receives a new power.

The movie was directed by edgar wright who is the guy behind the first two outings of simon pegg and nick frost. these three made the movie shawn of the dead together and then made hot fuzz. Shawn of the dead spoofed zombie movies and hot fuzz spoofed over the top police films like point break, lethal weapon, and bad boys. I liked hot fuzz better because it really pointed out just how ridiculous those movies were and had a mystery going for it as well. After those two movies, edgar wright split ways with the two actors and at first I wondered why. After seeing scott pilgrim vs the world, i know the answer. It was probably a choice between this or paul, (the new alien movie reteaming simon pegg with nick frost). Pilgrim looked like it could be unique and revolutionary, unlike anything ever put on film before. And Paul looked like it would just be more of the same. Wright made the correct choice.

As a filmmaker, he has gotten better and better. Hot fuzz was an absolutely terrific film. It was very british and very funny. Scott pilgrim is great in a completely different way. It is very american and artsy and hip. It is a movie about today’s youth. I love how just for a fun date pilgrim takes knives to an arcade early on and they stand at a game similar to dance-dance-revolution, doing all of the moves, flipping over each other’s backs, making sure they step on each spot just right. they know this game inside out, so that they don’t even have to think. kind of like zombies. And that’s probably why pilgrim is able to take on all of the opponents who come his way throughout the film. because of the skills he acquired from playing interactive video games. I love all of the little video game references and jokes that come into play both at the beginning and the end. the solo round and the continue countdown. Even the move where scott picks up an extra life is used well here. this is a very smart, very creative, and extremely fun movie.