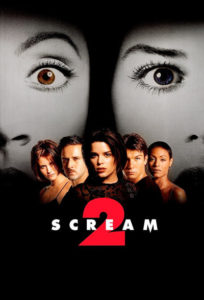 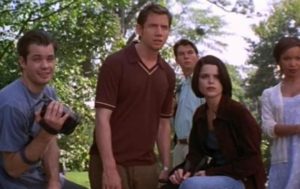 A sequel that does have some decent scares, but has nothing to offer in terms of storytelling, intelligence, or creativity at all.

A movie that was so rushed, they left the temporary background music (which is the music from another film,) in by mistake. This one was put into production the second Scream started doing well, and was pushed into theaters less than a year later. The result is a movie about a killer terrorizing the same old cast on a college campus. There are a couple of decent ideas here, but they are quick, and mainly just in the first act. A Stab movie has come out that replicates the events of the first film (creating a movie within a movie, self-referential, meta situation,) and then is some talk about the rules of sequels and the best sequels of all time. Other than that, this movie is awful. There is no college campus feel whatsoever, (we don’t even see a single campus security guard, and other than one quick scene, don’t spend time in any classes, or meet any professors.) The killings are quick and pointless. And the murderer reveal is as unintelligible and thrown together as the rest of the movie. There’s a reason why the third movie didn’t come out until three years later, (and was much better than this piece of junk.) These movies need time to write, develop, and get right. Scream 2 has very little to offer, and is mostly just a clear and obvious cash grab.

Scream 2 is a sequel that was rushed out of the gate in order to make a release date that was exactly one year after the first film came out. The problem is, when the original Scream (which was fantastic,) debuted, nobody expected it to be so successful. The movie was so tremendous and unexpected, that it single handedly relaunched the teenage horror movie craze of the late nineties. It also led to some pretty fun entries in the genre, such as Urban Legend. But unlike that movie, which actually had a gimmick and a catch, Scream 2 has nothing. All it’s got is that it’s a sequel to the great first movie, and so gets to use the same characters and actors, but that’s about it, and the emptiness of this film is pretty obvious, throughout its duration.

For starters, this movie doesn’t even have its own soundtrack. And we’re talking about background music. When a movie is being made, a temporary, filler soundtrack is put in place, while the real soundtrack is being worked on. The reason for that is so the director can get a sense of what the scenes will look like with some kind of music playing in the background. With Scream 2, they chose to use the music from the John Travolta action film Broken Arrow. Then the composer of Scream 2 went on to make his soundtrack and completed it. But somehow, his soundtrack never got put in. So this movie still plays with the Broken Arrow music, every time Deputy Dewey shows up. While most people might not notice or realize this, it is an embarrassing testament to how much this movie was rushed. Even the composer was shocked when he learned of the mistake, while actually watching the film.

More telling, though, is the fact that this movie was made with a very weak plot. Sydney Prescott, (the naive, innocent heroine from the first movie,) is now at college. There is a movie called Stab, which is based on the book reporter Gale Weathers, (Courtney Cox,) wrote about the events of the first film. The movie is being released in theaters, and this brings out a new Ghost Face killer. He looks and sounds the same, and this time, he’s taking his murderous rampage to college. The first deaths, (Jada Pinkett Smith and Omar Epps,) take place in a movie theater screening of Stab. The rest follow Sydney around on her college campus.

The movie within a movie opening is actually pretty cool. But once we get to college, the fun kind of dies down and becomes just usual, dull killings. The first one is at a sorority house with Sarah Michelle Gellar. This movie features the stars of all those other teenage horror films from this same time period. Gellar starred in I Know What You Did Last Summer, and Rebecca Gayheart, who plays a sorority girl here, is one of the stars of Urban Legend.. It’s a who’s who of actors that went onto bigger and better things after this one, including Timothy Olyphant and Liev Schreiver, both who got their starts with these movies. Unfortunately, not a single character or actor is very memorable here.

Once the killings start, all of our usual characters show up. Gale Weather arrives on campus to report on the story. Dewey arrives there to check up on Sydney. You would think after his brush with death, the murder of his sister, and the fact that he got injured so bad he can no longer walk right, maybe Dewey would stay far away this time. After all, what help could he really be to Sydney with his tremendous limp situation, where he can barely walk? But he’s here because the movie wants to bring back as many characters as it can, and after the body count of the last film, that’s really not a whole lot.

The other character who comes back is Randy. He’s the film nerd who knew everything about horror movies in the first film. It worked there, as he was citing the dos and don’t of classic horror films, and talking about Jamie Lee Curtis. It doesn’t work at all here. In order to be self-referential, (or attempt to be,) this movie talks about sequels. It has exactly two conversations about sequels with Randy at the center of both of them. In the first, he’s in film class, (the one classroom scene in the entire movie,) and the class is arguing over movie sequels that are better than the originals. While the idea of the scene is cool, it really comes down to them just throwing out names. Terminator 2, Aliens, The Godfather Part 2, and the Empire Strikes Back (by the way, apparently one of these counts and the other one doesn’t because it is part of a trilogy, so therefore not a sequel. Shouldn’t that rule apply to both films then?)

The other scene addressing sequels has Randy and Dewey sitting around discussing the rules of a sequel. The body count has to be higher, (in this film if it is, it’s not really noticeable.) The death scenes have to be more elaborate, (sorry, but no. You can’t beat Tatum getting crushed by a garage door while stuck inside of it.) And the third rule? We never get to it, because a character who is about to say it is cut off. There’s nothing creative or interesting about these rules. They basically just say that the sequel has to do more. Only this movie most certainly doesn’t. We don’t get to know any of the characters, and are basically just rushed from one killing to another.

Just to make this movie match the first film as much as possible, Sydney once again has both a boyfriend and a best friend. The boyfriend, played by Jerry O’Connell, is in a fraternity. His big scene comes one day in the mess hall where he starts singing, “Hey, I Think I Love You,” to Sydney and gets up on the tables to make a whole production out of it. What we really have here is a filler scene. The movie doesn’t want to be all about the murders, with every scene either featuring a murder or talking about them, and so this is the one scene that gives us something away from that. It’s pretty obvious that the scene is just meant to waste our time (and try to fill some of it.)

The biggest problem with this movie isn’t even that the story is bad. It’s not that the murders are routine, or that the dialogue is dopey. This biggest problem is how much this movie was clearly rushed. They don’t even attempt to give this thing a college campus feel. For example, aside from that one quick sequel talk scene, there are no professors anywhere to be found, and no other class scenes. Compare that to Urban Legend, (also about a college campus murderer,) where we got a number of different scenes with a professor, a Dean, a security guard, and a feel of paranoia among the student body. In Scream 2, it seems like a college campus told the movie, come and film here during the summertime for a week, before the students taking summer classes arrive, and get it done fast. There’s no sense that this actually is a college at all, (no college newspaper or college announcements or anything.) Even a scene where a fraternity kidnaps a guy and brings him somewhere for a party, has them bring him onto the stage in the college theater, and not to the frat house, where the party would really be taking place? Why? Simple, because the movie already had the set of the theater stage, from previous scenes, so was able to use it again. That kind of logic, simplicity, cheap attitude, and cutting corners is unfortunately what drives this movie.

On the plus side here, Scream 2 has two things going for it… The movie within a movie idea that gives us Stab as a film about the Woodsboro murders from the first film, and the brief talks about sequels (the scene where they go over the best sequels in cinema history.) But other than those quick elements, this one falls pretty flat. The characters are coming in with new hairstyles (Courtney Cox’s hair is dyed red and Sydney’s is cut short,) to make it seem like a longer amount of time has passed since the first film, but they’re not fooling anyone. This thing is so clunky that even the killer’s motivations seem thrown together and either empty or forced. As mindless fun, this movie is almost decent because of the scares, but as anything worth thinking about, Scream 2 is pretty lousy. Of the four Scream movies made, this one is definitely the worst.