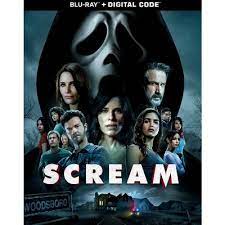 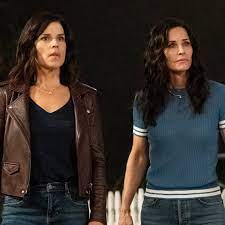 Far superior to any of the sequels, this movie still doesn’t measure up to the original, but it does present a situation where we actually have fun with all the tropes and cliches specifically of the Scream movies themselves.

Loaded up with nostalgia and Easter Eggs to the first movie, this one works. It works way better than any of the other sequels, not only because of the references, but also because it actually goes all in on the killings giving us horror and gore the way these movies probably should have been doing it all along (for some reason all of the past movies gave us blood and stabbing sounds, but never anything more brutal than that.) The movie builds up the mythology of the series from the very beginning, with the opening phone call being about the Stab movies, (and therefore, in this movie within a movie world, actually about the first Scream movie.) And it only goes further from there, with loads of references to most of the characters from the first movie. All of it works. What doesn’t work as well are the accusations these supposed group of friends constantly throw at each other. But that’s always been an element of these movies, and was definitely in the first film (although it was handled much more realistically there.) But other than some lousy dialogue from time to time, the movie is pretty enjoyable.

The newest incarnation of Scream is surprisingly pretty good. In fact it is by far the best of the Scream movies since the original. This is in large part because the other sequels have been so bad. Each of them just copied the ideas of the first movie and merely tried to put it in a new setting, (a college campus, a movie set.) This new one is actually the fifth movie in the series. The fourth movie was the first to try something a little different by bringing in new characters as the leads. But that movie didn’t work so well, because none of the new characters were very interesting (notice that not a single one of the new characters from the fourth movie appears in the fifth movie, other than the sheriff.) So what does the fifth movie,  simply titled Scream, do so well? It captures the mythology of these movies. It references and even re-enacts the events of the first movie in some very clever ways, and even gets further into exploring the characters of that first film. And not just the ones still alive. We get lots of references to Randy, Stu Macher, and Billy Loomis, all killed in movies one and two. This movie go way back to the roots of the first movie and isn’t afraid to make us nostalgic about what that movie started.

The nostalgia / mythology element is apparent from the very beginning. We get that staple of the films opening phonecall, where the killer asks movie questions to his would-be victim, over the phone, before jumping out and attacking. Only this time, instead of questions about classic horror movies like Halloween and Friday the 13th, the questions are about the Stab movies. The reason why this is so interesting is because the Stab movies are fictional movies within this universe, made about the Woodsboro killings (the events of the first movie.) So when the killer asks questions about the Stab movies, like who the killers were, he is actually asking questions about the first Scream movie. It’s incredibly meta, movie within a movie, material. This is so crucial to getting us into the nostalgia mood that there is even a bonus question, in order to give us four full questions. One about Sydney Prescott (Neve Campbell,) one about Gail Weathers (Courtney Cox,) one about who played Casey in the movies (Heather Graham,) and one about who the killers were in the first Stab (Scream) movie.

So the movie is loaded up with nostalgia or Easter Eggs from the very beginning. But on top of that, another reason why this movie is better than all of the other sequels that came before it is because this movie takes a very different approach to the killings. All four Scream movies that came before this one were directed by Wes Craven, a master of horror, and yet all four shied away from the violence. At least the actual brutality and gore element of it all. But now Craven has passed away and new directors were brought in. These new directors are Radio Silence, the team behind the movie Ready Or Not, and the studio really lucked out by getting these guys. Ready Or Not is a spectacularly creepy and thrilling movie.

With Scream, the directors have decided to stop hiding away from the killings, by just giving us lots of Psycho-like stabbing gestures to the sound of a metal knife cutting through things, without ever actually seeing anything. Instead, they are going all in on the horror and gore, which is apparent the very start of the film and the first Ghost Face attack. A girl named Tara is in her kitchen alone, just like in the first movie, when the Ghost Face killer calls and then appears. During the attack, we see Tara’s leg get broken and a knife go through her hand. Later on, we see a knife go straight through a persons neck, in one side and out another. We also see quick neck stabbings and throat cuttings, among other things. These directors are not playing around. They asked the question that we all should have been asking a long time ago… “why aren’t the Scream movies actually showing us anything?” And they decided to change that.

With the good, though, there is also some bad. The conversations here, that don’t have to do with the attacks and killings, are pretty lifeless. There is a group of friends (there’s always a group of friends in these,) and they say things to each other that no group of friends ever would. For example, a boyfriend and girlfriend (Chad and Liv,) come over to the group and one of the friends (Amber,) says to them, “is this because you’re not having sex yet?” If that happened, the person who confided in her about that, most likely Liv, would be angry with Amber. And rightfully so. Like, “what the hell, way to just announce to my boyfriend that I told you that.” It gets worse. When the characters all start accusing each other of possibly being the killer, (which they do quite a lot in this movie,) it gets totally ridiculous.

Now, to be fair, having the characters all accuse each other of being the villains is another staple of these movies. Or at least it was a key part of the first movie. But in that movie, there was a reason. Randy (Jamie Kennedy,) had a crush on Sydney, and despised her boyfriend, Billy. He wanted to make Billy look bad in any way he could, and if that meant convincing Sydney that her boyfriend was a killer, then Randy was going all in on it. But here, in Scream 5 (it’s too hard to refer to both movies as Scream, when talking about both movies in this review, so let’s just call the new one Scream 5, which is what it really should be called anyway,) hearing the characters accuse each other as often as they do is pretty dumb. And it starts right away too. In the first scene that we meet them, Amber is saying to Chad, “Tara said she fought back against the attacker. You have bruises on your arm.” At which point Chad just explains the bruises, instead of being mad at the accusation, like he should be, with something like, “what are you trying to say, that I’m the killer? How dare you?”

The accusations go on throughout the film, to the point where nearly every character, (including Dewey, played by returning actor David Arquette,) gets accused. It gets especially annoying during a scene in the basement of a house during the final act, where two girls go downstairs together and both try to convince each other, back and forth, that they might be the killer. This banter is repetitive and ridiculous, but luckily there is so much to like here that it’s easy to look past it. Especially when one remembers it was an element of the first movie too, so just kind of goes with the territory. So do some of the slower killings, like the one that happens to Wes, where he opens every door, closet, or refrigerator in his house possible, while walking around his kitchen doing things, and each time he opens one and is about to shut it, the music gets really loud to manipulate us into a fake out fear that the killer will be right there. All of this happens about three times, and it gets pretty tiresome.

Another really cool thing about this movie is that the final act takes place inside of Stu Macher’s house. That’s where the final act of the first Scream movie took place. With this one, one of our main characters now lives at the house, and hosts a party, just like Stu did at the end of the first movie. Most of the characters don’t seem to know that this was Stu Macher’s house, which is another ridiculous element. But if they did, then them going there for a party wouldn’t make sense. With a killer on the loose copying the events of the first movie, and a character living in the house where all these killings happened, the last thing you would do is go into that house for a party. Still, using the same house is definitely a positive for the movie, and gives us tons of great moments, including the characters going down to the garage the same way Tatum in the first movie once did (there’s a real missed opportunity here to not show the dog door in the garage, that Tatum was killed in when she got stuck and the garage door was opened.)

The best moment in the movie is actually at this house, with one character (Randy’s niece,) watching a Stab movie while lying on the couch, where the Randy character is also lying on the couch, watching Jamie Lee Curtis in Halloween, shouting at her “behind you, Jamie.” All the while, the killer is right behind Randy. So in this movie, you have the niece on the couch (in the very same house and spot as the other couch,) shouting at Randy, while Randy sits on the couch shouting at Jamie Lee. And to cap it off, the killer is right behind the niece. So the killer is watching her, she is watching Randy, and Randy is watching Jamie Lee. It’s a pretty perfect, and incredibly meta scene. The movie is loaded up with fun ideas like this. Tons of references to Billy, Stu, and Randy. There probably should have been more to Tatum as well, but at least they got the other three in here. And actor Skeet Ulrich even reprises his role as Billy, (the first time he’s appeared in the movies since the original.) This movie knows what it is doing and it lives and dies on the nostalgia. For the most part, all of that really works. I don’t know how you top this one, in terms of Easter Eggs (maybe the next one actually will give us references to the Tatum character from the first movie, played by Rose McGowan,) but either way, this fifth entry is pretty good. Certainly better than all the sequels that came before it, and a definite step in the right direction.