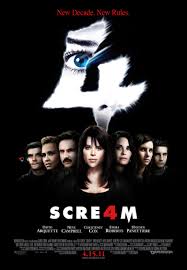 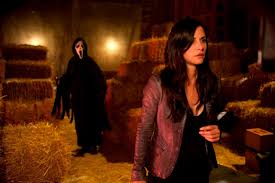 A worthwhile entry, that keeps you watching as much for it’s witty social commentary as it does for it’s bloody murders and mystery.

The thing about the Scream movies is, either you like them or you don’t. Every one of them really is the same, and feels the same, ever since the first. Now that’s not to say that you can’t like them all. I mean, I certainly do. It’s just to say that they all feel like each other, and don’t vary all that much. the reason why the first film was the best is because it was the only time where things were actually fresh and original. The premise behind these movies is a bunch of teens that are savvy to the horror movie genre and know all the clichés and spend much of the movie discussing them, are still victims to a masked serial killer. the irony is that if these characters are really so smart and know all about what not to do, why do they still keep doing it? Why do they put themselves in situations that they should never be in? in that respect, these movies are never quite as smart as they think they are, but they are still a lot of fun.

scream 4 is better than the last two sequels, which really means it’s the best movie since the original. that’s because in many ways it tries to be unique. for example, it’s always been a trademark of these films that the movie opens with the murder of some prominent celebrity. In the first film it was Drew Barrymore. The second had Jada Pinket Smith and Omar Epps, and I don’t even remember who it was in the third movie. but for this fourth film, there is something different. there’s a series of murders, and half of them turn out to be movies that other characters are watching. and by doing that, the characters who are watching them get to talk about how uncreative it is for the characters in a movie to be watching the movie that came before it and referencing it. of course, this is all meant to Poke fun at the scream movies themselves and how they are always referencing the events of the first movie.

that opening sequence ends up being a lot of fun because it turns into three different scenes, each one feeling like the real thing until we learn that it is just a movie truth about each one. For celebrity killing, we get Anna Paquin and Kristen Bell. And it all launches us into the story where once again the town of Woodsboro is faced with a serial killer who is now called “ghost face,” and terrorizes the young and the innocent.

the reason why ghost face comes back? Because Sidney is coming back to town. Sidney Prescott, played by Neve Campbell, has always been the star of these movies. and they go so far back (the first was made in 1996), that back then she was a legitimate movie star. These days she doesn’t really star in anything anymore and neither do her costars, Courtney Cox and David Arquette. but it’s great that every one of these films has been able to bring the three of them back. I guess Liev Schreiver is the one, who really made it big from the series, and so he won’t be back anytime soon, but it would be nice for him to make a cameo at some Point, considering these movies kick-started his career.

Scream 4 has Sidney now an author of a self-help book. it’s about how she survived not only the killer, but the media attention, the books, and the stab movies which were made from the books. I love how these scream movies parody themselves with the stab films and make them a part of the youth culture in here. for example, the kids in this town have an annual stabathon, where they screen all six, or however many, stab movies there have been. I suppose the stab movies are also kind of spoofing the saw films, and how there were so many of them. the cool thing is that scream 2 invented the stab movie long before saw was ever created.

The teenagers in this movie know every horror movie character and every cliché, which is really something that every film in the scream series has. it’s a little ridiculous. for one thing, the killer is always asking questions about scary movies, and if the victims know all the answers, then how do they get killed anyway? Still, we get our group of kids, all leading to Sidney because one of the girls is her cousin.

That girl, Jill, has a bunch of girlfriends. and then there are the boys they hang out with. There’s Trevor, the shady boyfriend who dumped Jill for another girl and now wants Jill back. then there are the two movie club guys. one of them spends nearly the entire movie with an ear piece on, saying he is doing a live Pod cast. what about? who wants to listen to that?

the movie does try to update itself and make fun of the old while embracing the new as often as Possible. Everyone has a cell phone these days and there is even a ghost face app that let’s you talk like him. there are plenty of jokes about other movies, which is always the highlight of these films. and then there are the killings.

the cool thing about the killings is that by the start of this movie, we have a long list of suspects for who the killer might be. and as the film goes on, more and more characters die and our list grows smaller by the minute. Not only are all the kids suspects, but also so are a group of cops who sheriff Dewey is in charge of. There’s Anthony Anderson and his partner, and then also a young, blonde cop who seems to have a crush on Dewey and annoys the hell out of Gail weathers (Courtney Cox).

Speaking of Gail Weathers, she’s isn’t given a very significant role here, playing a sort of outcast who is retired, but trying to make it back in the game. The killings are fun and so are all the witty references to Hollywood or other films. you watch this movie as much for those as for the mystery of figuring out who the killer actually is. and it’s a pretty great twist too. this is an enjoyable movie. I really did like all of them, and while this is better than most, it also feels a lot like al the others. Only the first Scream movie is exceptional. the rest are all just pretty good, in the same kind of way.