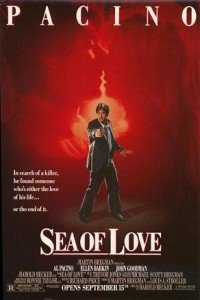 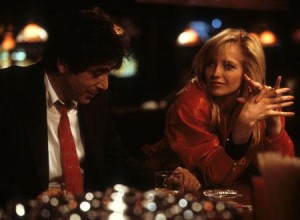 A pretty cool crime drama, this one is as much about the characters and the romance as it is about the actual crime.

This is a pretty entertaining noir detective story. It’s in the same vein as the steamy Sharon Stone mysteries from the early nineties, like Basic Instinct and Sliver, which is to say, it’s shlock, but it’s shlock done well. It’s a steamy sexual mystery, (I guess that really got started with Body Heat, taking the ideas of the old noir like Double Indemnity, up a notch.) In Sea of Love, the movie is about relationships as much as it is about the mystery. And that’s a good thing, because there are some great relationships at work here. Al Pacino’s character, Keller, works alongside a detective who has stolen Keller’s wife from him. The two of them go at it quite a bit in the first half. Then in the second half of the movie, we meet another detective, (Sherman, played by John Goodman,) who helps Keller with the investigation. Together they orchestrate a sting operation that is incredibly fun. And all this before we even meet the femme fatale of the movie, Helen, played by Ellen Barking. The entire cast is knocking it out of the park with this one, to the point where even if the mystery isn’t especially great, there is just so much else to appreciate here.

Sea of Love is the first of three great movies made by director Harold Becker in the late eighties / early nineties. The other movies were Malice and City Hall. All three of those movies were crime mysteries. While City Hall and Malice are the better films on this list, (they both that helped define the rime drama genre in the mid-nineties, along with movies by Sidney Lumet, such as Night Falls On Manhattan,) Sea of Love is pretty great too. As a crime mystery it is just okay, but as the story of these two lost detectives trying to find themselves while pursuing a case, it is incredibly compelling.

The movie stars Al Pacino and was made back when Pacino was red hot, on a streak that lasted about two decades. From the mid-seventies (with Godfather Part 2,) to the mid-nineties, (ending with Heat,) Pacino could do no wrong. He was just lining them up and knocking them down, one after another. It helped that he had great directors to work with (Lumet made Dog Day Afternoon and Serpico with him and Brian DePalma made Scarface and Carlito’s Way,) but for the most part it was all Pacino. That New York accent was never thicker than when he was lighting up the silver screen as a hardened gangster or police detective. Sea of Love served as a perfect example for showcasing this.

In the movie,Pacino plays Detective Frank Keller, and he lets us know, right off the bat, that he’s no spring chicken. Keller is facing a point where he has been on the force for twenty years, and everyone is telling him he should retire. It seems to just be that time, and yet Keller has no interest in this. He loves the job and wants to keep at it. Keller has committed his whole life to the job to the point where it has cost him his relationship with his wife. He now calls her up in the middle of the night to talk to her about diseases he thinks he might have. The funny part is that she is now living with another detective in Keller’s unit who we works with closely.

It isn’t often that we get a relationship between two character who have to work together where one of them is dating the woman who used to be married to the other one. The closest example I can think of comes from a little old, barely seen movie called The Ice Harvest where John Cusack’s wife left him for Oliver Platt, and has since then left Platt as well. But those two characters were friends. Here in Sea of Love, the two detectives that work together, Keller and Gruber (Richard Jenkins,) are at each others throats every chance they can get. It might not be relevant to the story, about catching the killer, but this whole situation where the two men work together and have tons of bad blood for each other is terrific. Especially when you see them at a crime scene, having to put aside their differences and work the scene, and you know exactly what each one is really thinking the entire time.

The mystery at hand here is about a murderer who shoots men in the head while they are naked and possibly while they are having sex. The way that we see only the man on the bed before he is about to be murdered, in what is clearly some sort of act of sex, (it doesn’t appear that there is a woman underneath the man, each time,) but that we don’t see the other half of the room, if there is a woman there, or the murderer, is very much like something out of Basic Instinct or Sliver, (of course Sea of Love came before those other films.) It’s like those movies perfected the sexual noir. When this movie came out, at the end of the eighties, it was considered super risque. Basic Instinct certainly took that up a notch.

Keller is analyzing the scene of the crime one night, going through the dead man’s apartment, of the first murder, when there’s a knock at the door. It’s a date showing up to meet the man who has been killed. It turns out, that victim had placed an add in the newspaper to meet women. Keller finds another murder where the details of the crime scene are similar and speaks to the detective working the case. This is Detective Sherman (John Goodman,) and the two of them look to see if this second victim also put an add in the paper. He did. So the thinking is that the two cases are definitely connected and were probably done by the same killer.

At this point, Keller and Sherman start working closely together. They get the police chief to authorize them setting up a two man detail, and getting the chief to agree is a humorous little hassle. What the two detectives want to do is place their own add in the paper and then date a lot of these women who respond to the adds, hoping to find the killer. When the chief first hears this plan, he laughs the two detectives right out of his office, joking that it’s just a scam for them to get some dates and get the police department to pay for it. But then there’s a third victim, and just like that, the chief authorizes the sting operation.

And so Detectives Keller and Sherman go to work. They take turns being the dater at a restaurant, while the other one plays the part of the waiter. And the movie takes the time to show us multiple dates with different women. There’s an older lady, for example, who really believes that Keller doesn’t like her because she is too old. She then stays around at the bar, after their date, to watch Keller sit down to dinner with a number of other women. When the older woman gets up and walks out of the place, you can see that she’s crying. Another woman comes in, sits down with Keller, and can tell he’s a cop immediately. She walks out on the date. Moments like this are interesting and fun, and while they might not have anything to do with catching the killer, they certainly make the movie entertaining.

One of the women that Keller meets really captures his attention. This is Helen Cruger, (Ellen Barkin,) and she also walks out on the date, not interested in Keller at all. But then she runs into him at a grocery store and the two of them get to talking a little more. Next thing you know they are dating and really getting into each other. There are some definite moments of paranoia, like when he throws her in a closet because he thinks she has a gun, and also moments of anger, (like when she finds out he’s a cop and has been lying to her about being in the printing business,) but all of this just makes their relationship stronger. It isn’t long before Keller is thinking serious about this woman that she just might be the one for him to finally settle down with.

What’s cool about Sea of Love is that the movie is about the relationships as much as it is about the mystery. Pacino plays the part of Keller, a man who has reached the point of his life where he is ready to commit and thinks he just might have found the woman to do that with, perfectly. The dynamic between him and Richard Jenkins, as the enemy,  humorous in the first half, and the relationship between him and Sherman is pretty entertaining in the second half. And then there is the relationship between him and Helen, which is incredibly steamy. Ironically enough, the mystery is one of the weakest parts of this movie. It’s not bad, or anything like that, but it’s just a little too obvious. Still, there’s so much else to like about this movie, that having the mystery not be all that strong really isn’t a big deal.