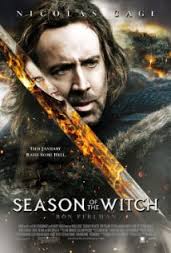 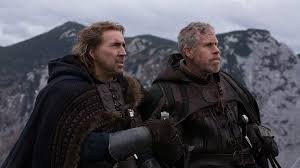 A decent, but not all that great film, that suddenly gets absolutely terrible in its most climactic moments.

Season Of The Witch is an okay movie for most of the way through. There isn’t anything great going on here, at any time, but we get the story of a band of soldiers trying to transport a prisoner witch to a distant kingdom where she will be given a trial. these guys come across all sorts of challenges and threats on the road, and while familiar, it’s still pretty decent stuff. There are even some interesting moments to the story, like the beginning where Nicholas Cage’s character, Bushmen, decides to give up being a knight for the church. unfortunately, the ending is where the movie really falls apart, with some truly terrible special effects. it’s hard to believe they could be so detrimental to a movie, but in this movie, they are. there’s an alright surprise at the end, but the effects are just too horrible to get passed. the movie is okay up until it’s ending, but it sure falls apart at the worst possible time.

Nicholas cage is in a slump. he has been for years. In fact, other than Kick Ass (which was hardly his film), and Bad Lieutenant: Port of call – New Orleans (which was just okay), he hasn’t really had a good movie in close to a decade. and most of his movies end up being absolutely awful. It’s gotten so bad, that Cage is becoming a punch line with movies that either goes direct to video or feel like they should have. Movies like stolen and trespass (one of those movies actually had Nicole Kidman in it too, but don’t ask me which one.) and the worst thing about Cage’s movies is that most of them don’t even look watchable. From The Sorcerer’s Apprentice to Bangkok Dangerous to The Knowing, everything looks one hundred percent predictable and clichéd. And that’s exactly why I took a chance on the movie Season of the Witch. I said to myself, they couldn’t all be bad. Maybe this guy is just getting a bad rep and people don’t give him the benefit of the doubt anymore. I was wrong.

the movie is about two knights from the crusades who suddenly decide to stop killing in the name of god and instead go on their own way. that’s how the movie begins. first these guys are in battles, fighting wars, and getting the movie started with some epic scale scenery. Then Cage’s character, Behmen Von Bleibruck (did they even care that nobody could remember his name and didn’t know what his name was the whole way through the movie,) accidentally kills a defenseless woman during an attack and suddenly has a revelation.

he turns on the church and on the priests who are ordering him to fight. now this is actually kind of interesting, because it is total displacement. he suddenly puts the blame on these characters, telling them how terrible they are, ignoring the fact that he has been doing the killing and blindly following them. it’s easy to blame someone else when something goes wrong and that’s exactly what happens here. Now, why his friend, Felson (now that’s a name we can remember), suddenly follow him, I have no idea. The movie could have at least given us a scene of Behmen convincing his friend to see things a different way.

so the two of them now wander off and come to a castle. Felson warns Behmen that they should go around and not make a stop there. why? what does he expect to find and what clues tell him this? they go in anyway, of course, and find that a terrible plague has hit the kingdom. even the king has caught it and these guys decide to play the blame game and blame a witch. they believe that this witch has to be brought to trial in a far off land where the people who live there will no what to do with her and how to give her a fair trial.

the whole thing is pretty ridiculous, because in reality, if they thought the witch was the cause of their problems, they probably would have just killed her and been done with it. but this is a mission movie, like the lord of the rings, where the characters have to go on a quest to deliver something, or someone, to a far away land. whether it’s believable or not, we buy in enough to watch the movie and go with it, and so we start out on the road with these guys.

Ron Perlman plays the friend character, Felson, and he’s probably the best thing about the movie. Perlman is an actor with a sense of humor, and even when he’s not especially funny, (like in this movie,) he’s still enjoyable to watch. He’s one of the main reasons that the Hellboy movies were as entertaining as they were, with director Guilermo Del Toro, being the other reason. Here, in season of the witch, he accompanies Behmen and fights alongside him in every battle, but really doesn’t have much of a character of his own. He has only one interesting moment, where Behmen is ready to kill the witch he, and Felson steps in the way, finally ready to defy his friend about something.

most of the movie is just an on the road traveling film. they come to challenges, such as a wolf attack or the crossing of a Poorly constructed rope bridge, and also deal with mysterious happenings at night. Characters see things and hallucinating and end up dying on the road. The witch even escapes at one Point, only to be recaptured and returned to her wagon prison cell. none of this stuff is great, but it’s okay, and keeps us watching. one thing cool about this movie is that we really don’t know where it’s going. and even if we think we know, most likely we are wrong. A best guess would be that when they get to their destination, the witch can’t get a fair trial and everyone is ready to kill her, and Behmen steps in the way to defend her. boy is that wrong.

the ending is where the movie really falls apart. everything that has led up to the ending has been fine. none of it has been great, but at least it was somewhat entertaining and watchable. Up until this point, the movie worked despite Nicholas Cage and not because of him. what that means is that his acting and way too serious tone and ridiculous sounding dialogue only hindered the movie. if it worked at all, than cage was certainly not the reason. but now, at the end, there is a much bigger problem.

the climax is a mess. the surprise twist is fine and even kind of cool, but the effects that end the movie are just beyond awful. they are so bad that they are actually silly. these effects actually take us out of the film to the Point where there really is no recovery. I’m talking about what happens to the witch, and how computer effects end up ruining everything where costumes and makeup would have done just fine. this could have been a very cool ending and instead, it nearly ruins the movie.

Season of the Witch is not a good film by any means, but for most of the way through it is at least watchable. you are definitely interested as you ride out with these characters and wonder what’s going to happen with them. There’s the mystery angle of whether or not the woman is really a witch, and I like the way the movie finds the right way to answer that question. unfortunately, the effects and ending become totally anti-climactic. in the moments that matter most, this movie really falls apart. it’s a shame too, because the twist was certainly cool, and could have made for a much better climax and a much better film. there isn’t a whole lot of action for most of the movie, and we kind of crave it. But then when it does come at the end, and nearly ruins everything, we are thankful that at least it held off until this point. we now understand why it wasn’t in most of the movie. maybe they should have kept it that way and spared us from a horrific ending.