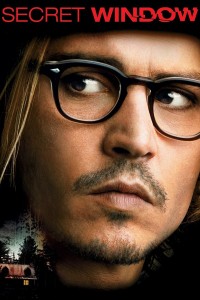 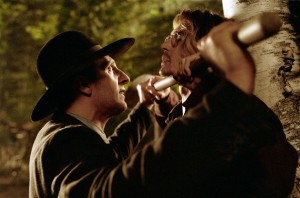 An interesting thriller that keeps you wanting to know more at all times until it’s great twist ending.

Secret Window is surprisingly a pretty decent thriller. I say surprisingly, because the premise doesn’t seem like it has all that much going for it. the movie is about a confined, recluse of an author, named mort rainey, (johnNy depp), who hangs out in his quiet cabin by himself. one day he has a visitor, named shooter, (john turturro), who claims that rainey published a short story in a magazine that was copied from one of shooter’s stories. and so we have a movie about plagiarism. doesn’t sound very exciting at all. but in the hands of writer / director david koepp, something interesting actually forms.

koepp has only directed a handful of movies, starting with another cool thriller, stir of echoes. but he has certainly written a lot over the years, and he knows what he’s doing. i would hardly trust him to direct a big budget version of anything, but with the small, quiet thrillers that border on horror, he’s right at home. stir of echoes crossed over into the suprernatural world the same way Secret Window crosses into the psychological one. and both movies end up being pretty cool.

the problems in Secret Window start when rainey finds his dog murdered and then a note on his door that leads him to believe this shooter guy is responsible. by this point shooter has already shown up at rainey’s door twice, demanding to see the magazine where rainey’s article (titled “Secret Window,”) was published some years before. the question in debate is whether rainey or shooter came up with the story first. one pretty cool scene has rainey sit down with both his version and shooter’s version, side by side, and compare how many sentences are exactly the same. it’s pretty creepy.

aside from all of the business with shooter, rainey also has a former life, before he moved himself into the cabin, which comes back at him. he’s got an ex-wife, (amy) played by maria bello, who cheated on him. she says that rainey checked out of the marriage mentally, and so she had to find someone else. the movie actually opens with a quick flashback to rainey busting in on the motel room where his wife is sleeping with another man, ted, (timothy hutton), and then flashes away from it, giving us only a glimpse of what it was all about. later on, we end up hearing about this again and again, and are able to make sense of it all.

now, with rainey holed up in the cabin, out in the middle of nowhere, and amy and ted back in manhattan, she wants a divorce. she wants to marry ted. she calls rainey and talks to him a little, and you can hear that he wants her back and wishes he had her. especially when she says something like, “ted’s gone,” and rainey mistakes it to mean she and ted broke up. he starts expressing his happiness, just to have her say she only meant that ted is not there at the moment.

the main focus of the story, of course, is on this shooter character and what he wants. rainey goes into the town to talk to the local sheriff about the dog killing, but it doesn’t get him very far. and so he hires his own private detective, ken, a man he has worked with in the past, played by charles s. dutton, to come and check on things. we hear a little bit about the back story between rainey and ken, and how there was a similar stalker once before that ken came and helped rainey out with. that man also claimed that rainey was stealing ideas, and in the end they had to pay him off. but this is something different. this shooter character is dangerous and deadly.

by the time the movie has crossed it’s halfway point, there is a lot in motion. there is the threat of shooter, the private detective checking in on it, tons of back story, and a wife and her boyfriend who desperately want rainey to give them a divorce. now that all the pieces are in play some big things are about to start happening. a house is burned down. a few more characters are killed. and rainey is left still fearing for his life. only instead of phonecalls between he and his wife, the conversations are now in person. they meet to talk about the burning of the house. they meet in front of detectives. ted and rainey have words outside the police building. ted even comes to see mort, up by the cabin and they have a confrontation at a gas station. everything is becomes more heated and more tense.

the final parts of the movie are the best. not just the final surprise, but even before that. rainey has made a valliant effort to get a copy of the original magazine that had his article in it. he wanted to get it from their old home in manhattan, but then the home burned down. so he has to get the original copy from his agent instead. and when it finally arrives in the mail, he gets a big surprise, and asks all the right questions about what it means.

and that leads us into the final act, where everything starts to come together. it gets pretty wild. the twist is completely eery and cool. it’s spooky as hell. especially with the path it ends up leading to. this movie has no intention of giving us a feel-good, everything wraps up neatly kind of ending. in fact, it is the exact opposite as something like the vanishing (Jeff bridges, kiefer sutherland version.) whereas that movie caved for a crowd pleasing ending, Secret Window does not. and it’s all the more scary because of that.

the movie is pretty wild. it gets a lot out of keeping things simple, until about the halfway point. it very clearly states that it’s a movie about a guy living a lone in a cabin in the woods. and all of those slir crazy and claustrophobic elements come into play. i like that the movie explains it’s title both literally (we see a flashback to them first buying the cabin, and how when they move an armoir out of the way they find a Secret Window and underneath it a secret garden,) and metaphorically (the final twist points out another meaning of having a Secret Window.) the story was based on a steven king short story and then turned into a feature lenght screenplay by koepp before he made it into a film. i’m glad that he saw the short storie’s potential. it’s not a great movie, simply because the only thing that makes it from just average to something kind of special is the twist, but it does work out to be something cool.