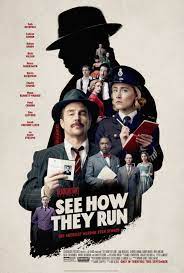 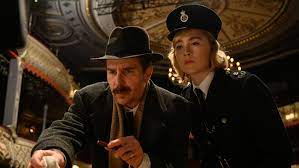 A Who-Dunnit murder mystery set on the stage of a London theater, featuring the cast and crew of a play where the murder takes place.

This is an entertaining and somewhat fun movie, set in the world of the London theater. The story centers on the cast and team behind Londons most longest running play, when someone is found dead on the stage. Murdered. It’s up to two officers, who are called in, to solve the case. There is humor and clever camera antics here, but nothing that really stands out as  spectacular. The two officers are fun, as is the victim, but the suspects are all pretty forgettable, and the climax doesn’t really work the way it should. That being said, Sam Rockwell and Saorise Ronin really elevate this material and pump it up with humor, making it a relatively fun experience.

See How They Run is a murder mystery that feels very much like a Wes Anderson movie crossed with Knives Out. This caper film is loaded up with all of the usual Anderson ingredients including a large ensemble cast, quirky comedic timing, and fancy use of camera trickery. But of course it’s not a Wes Anderson movie and maybe that’s all for the better. Anderson most likely would have gone too far in his quest for being artistic and strange, whereas this movie is as much about the mystery as it is about trying to impress the audience with style. On the downside, it’s not nearly as funny as a Wes Anderson movie, either.

The mystery story is where the Knives Out element comes in. There have been lots of murder mystery movies featuring large casts before (Clue being my favorite of the genre, and Murder on the Orient Express and Death on the Nile being some more recent examples.) But Knives Out gets the credit for bringing the genre back to the forefront. It’s the movie that reintroduced the term “Who-Dunnit,” to the mainstream, by showing them a genre that they had no idea they wanted to see,  (it even reintroduced that phrase in its trailer, putting into words something that people either had forgotten about or just weren’t aware of.) And it’s because of the success of Knives Out both critically and also with audiences, that we have now gotten a relaunching of the genre including both network shows (The Afterparty,) and a new movies, like See How They Run.

The title is a bit clunky (it’s forgettable, has no real meaning, and is easily mixed up with similar things like See Them Run,) but other then that, this one has all the right building blocks in the right places. That include a cast that features the great Sam Rockwell as the star and lead detective. He is surrounded here by other familiar and likeable actors such as Saoirse Ronan, Adrian Brody, and David Oyelowo.

The opening of the movie features Adrian Brody as Leo Kopernick, giving a monologue where he explains the general workings of a who dunnit and how these stories generally operate. It’s pretty clever, dissecting the parts right in front of us at the very beginning, and also critiquing them at the same time. Kopernick considers these cliches to be the usual familiar staples of the genre, and he’s got a bone to pick with them..  We’re talking about ideas like a character being killed in the first ten minutes and that character being someone who all the other characters hate, so that there is a whole list of suspects and motivations.

Kopernick is the screenwriter taking on the job of writing the movie version of this play. And so he’s very critical of the play and not afraid to express his opinion to others his dissatisfaction with it. Only it’s a hit play on London’s stage, called the Mousetrap, and is incredibly successful. Which means the people behind it express compliments and congratulations, and  Kopernick gives them anything but. He doesn’t actually have to change or be critical of anything at all, and yet he comes in with a fine tooth comb, ready to cut the fat and make changes, and naturally angers a lot of people involved.

Needless to say, it is Kopernick who is the victim. There’s a big party one night, after a performance of the play, and Kopernick ends up in a fist fight, in front of everyone. He falls over a cart full of food during the fight, and gets covered in the mess. This leads Kopernick to go backstage, looking for a change of clothes, and that’s when the murderer strikes. The murder itself is clever, using on stage ideas like that a door opening to reveal a wall behind it, because the door was not actually a real door leading to another room, but was instead just part of a set. Kopernick is killed and his body is left on a couch right in the middle of the stage, on the living room set of the play.

That’s when our detectives get called in. Sam Rockwell (Inspector Stoppard) and Saoirse Ronan (Constable Stalker.) These two are entertaining First of all, Rockwell alone, has really become one of those actors who seems like he would be a fun, relaxing guy to hang out with, and so that naturally translates to the big screen. He’s got that cool guy persona that you just want to be around, where you can tell he’s a prankster and doesn’t take life too seriously. From Galaxy Quest to Moon to Three Billboards Outside Ebbing Missouri, this guy has really proven himself to be in a rare breed with actors like George Clooney, Robert Downey Jr, and Jeff Bridges. Guys who you just want to be in the company of. In this movie, Rockwell gets to do a British accent, which is a nice change. And he also gets to play the seasoned veteran, who now has to take on a new, naive partner.

And Ronin, playing Constable Stalker, is a lot of fun too. She is the carefree, always loving every moment of detective work, character, who writes everything down on a little note pad. Stalker puts a stop to that, telling her the reasons why it might actually cause a problem. Stalker’s other flaw is that she has a habit of jumping to conclusions, rushing to accuse people at the first sign that they could have possibly been the culprit. This plays into a fun little twist later on in the movie, when a character is accused who you would never have expected, and Stalker is the one behind the accusation.

The climax of the movie and final act takes place in a mansion, where all of the suspects have been invited to a party. Now, I’m all for mansion murder mysteries. From Clue to And Then There Were None to Ready Or Not to even Knives Out itself, they can be pretty terrific. But you need to spend some significant time in the mansion, getting to feel like you know the place a little. Just putting our characters in there, out of the blue, feels very forced. It also feels confusing. This movie established that the theater was the main location, including the behind the scenes sets and dressing rooms. That’s where the climax should have taken place, for a bunch of reasons. One of which is that it would have given the movie a circular ending, connecting back to the beginning.

At the end of the day, See How They Run is a pretty good, but far from great movie. It gets a ton of mileage out of its two stars, Rockwell and Ronan. Without these two actors, it would have been a very different movie. And Adrian Brody too, in a short-lived role, is both memorable and entertaining. Other than that, the rest of the cast is pretty forgettable. And the story is just okay. Stylistically this movie is pretty cool, and includes all kinds of camera tricks such a split screen to show us two different things happening at the same time, in different parts of the theater. If only the mystery itself, including the climax, was a little tighter., and more compelling.