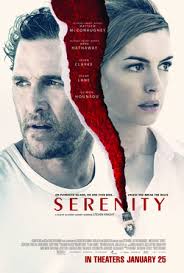 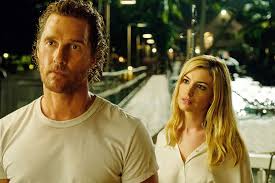 A pretty standard and basic noir that goes way off the rails with a twist that comes in the second half of the movie, and changes everything.

Here’s a movie that was made as the follow up film to Locke, by the same director, and boy is it a disappointment. While that movie was one of the most original and creative pieces of cinema possibly of all time, this one goes the exact opposite route. It tells the story of a man who lives a secluded life working on a boat, taking tourists out on the water, and sleeping with the local women. Then one day a woman walks onto his boat and offers him money to kill her husband. From there, we get two twists, if you can call them that. The first is who this woman is. The second goes much deeper than that. And the twists are not reserved for the ending, which is actually a nice touch. But they are so ridiculous and extreme that you quickly realize the whole movie hinges on them. Like they were the reason for this director and this cast to make the movie. In other words, the movie is about the twist. No movie should ever be that way. The movie couldn’t exist without the twist (and if it did, it would sure be pretty basic and boring.) So even with the twist, things feel forced and not very intelligent.

Serenity is the second major film directed by Steven Knight, a talented screenwriter who got way over his head with this one. Knight has written the screenplays for such movies as Eastern Promises and Dirty Pretty Things. But his real claim to fame and success story has got to be Locke, the fantastic and incredibly original film that takes place entirely in a car during one night, as a man’s life completely unravels through a series of phone calls he has. That movie is so creative and so remarkable that you would think whoever made it could tackle anything. Not so. As it happens, like a lot of directors, when the resources are limited they do their best work. But when given more money, bigger stars, and more resources to play with, the cracks come out. And Serenity is filled with cracks, starting with the title. There’s nothing wrong with the word “Serenity,” other than the fact that there was already a movie with this title, (A Joss Whedon space-aliens movie, based on the popular TV series Firefly,) and it had quite a following. Knowing that, this movie should have definitely changed its title. But that’s the least of the problems here.

The story is about a fisherman in a quiet town, living a pretty calm and peaceful life. He spends his days on a boat taking tourists out fishing, and his nights either at the local bar or in the rooms of wealthy women who pay him for sex. When we meet this man, Baker Dill, (Matthew McConaughey,) he is on a boat with two tourists. They are both passed out in lounge chairs, with beer cans dropped beside their feet. And Dill is on board, driving the boat with his first mate, Duke (Djimon Honshu.) When a giant tuna fish starts tugging at their line, Dill grabs the fishing pole and tries reeling it in. The tourists wake up and demand to have a go at it, only this is far too big and important of a catch for Dill to just turn over to them. When they insist, and talk about how much they paid him, Dill even actually pulls gun on them. Talk about an extreme outburst of an opening.

Clearly our protagonist is off his rocker. We learn that the tuna he was after is basically his great white whale, or great white buffalo, or whatever term you want for the single opponent that Dill has been pursuing for years. This tuna is his arch enemy, and he almost got her this time. We meet Constance, one of the women who Dill is sleeping with (played by Diane Lane,) and hear a little about her missing cat. And then Dill goes off and has words with Duke, where he tells Duke that he has brought Dill nothing but bad luck as a first mate, ever since his wife died. Well, now we really hate this guy. He’s being a jerk to a friend whose wife died and making Duke feel even worse about it. And all the while, Dill keeps seeing Constance’s cat walking around near him. Which has to mean something, although we have no idea what.

Then one day, a new customer shows up. This is Karen Zariakas (Anne Hathway,) and she and Dill go way back. At first we think they just knew each other in high school or something, but then we learn that they actually have a kid together. Dill asks her, “how’s my son?” And it seems to come out of nowhere. It certainly hits us by surprise. Dill’s son still lives with Karen. Yet she and Dill haven’t spoken for years. He has moved on with his life and found another one down here. Only Karen has a favor to ask him, which is more of a job she wants him to do. She wants him to kill her husband. And this is where we start getting into Body Heat-like classic film-noir territory.

Karen tells Dill that her husband, Frank, is abusive. He beats her. And he is also abusive to their son. She tells Dill to kill Frank not for her, but for his son who is in a bad situation because of this man. She tells him that his son wants him to do it. But still, Dill refuses. When Karen offers a ton of money, he still refuses. And when Duke comes to him and tells him that he needs to take this job because the money is too good to turn down, Dill still refuses. Meanwhile, Dill also has a situation where he has told Constance that he can use her son as a first mate, since he is no longer working with Duke. And so Constance’s son arrives, looking for work.

Now, throughout all of this, there are clues that something bigger is going on. Thank goodness, because what is there on the surface is pretty weak. So far it’s just the story of a man who is tightly wound up getting the proposition put in front of him to kill another man who apparently is being abusive to the first man’s son. It’s enough for a short story, but not for a whole movie. However, there is definitely more to this story than there appears. And we first get clues about that very early on. When Dill arrives back at the docks with the two tourists that he and Duke take out, in their first scene, a businessman, dressed in a suit (that makes him look very out of place here,) tries to catch up with Dill, only is not successful. This man appears about two more times in pretty much the exact same way, always trying to find Dill, always showing up just a moment too late. Clearly there’s some kind of a mystery going on.

Another element of the mystery is that apparently Dill and his son have a connection where they can hear each other, or speak to each other. Now this one doesn’t appear until after Karen shows up and starts talking about their son. Then she explains that she knows about the connection, and then we actually see it. But we still don’t quite understand it. Is it a literal connection, like the way they say twins can hear or feel each other’s thoughts? Is is a poetic metaphor, which much of this movie seems to be? The movie wants us to keep guessing. It wants us to be on shaky ground here and unsure of exactly what’s going on.

And then it does something very strange. It tells us the twist, about halfway through the movie. Now, even though it’s put out there at the halfway point, I’m not going to announce it here. I’ll just say that the businessman finally does catch up to Dill, and when he does, he has some very interesting news to share with him. This happens during a rain filled stormy night where the man catches Dill in his little shack by the ocean. They sit down and have some drinks together and the man exposes everything. And it’s a pretty big twist. It’s unusual to say the least. But I won’t say anymore about that.

From here, it is onto the situation of whether or not Dill will murder Karen’s husband. Duke finds out about the proposition that has been made, and he puts himself into it by hiring men to beat up the husband. The idea here is that they will beat the husband so badly that he won’t be able to get on the boat and go out fishing. Only he still does. And this is pretty stupid. The husband, (played by Jason Clarke,) is all bandaged up and hobbling and on pain killers, and yet his wife is basically pushing him onto this boat. First of all, anyone who sees this man walking around has got to be asking questions. Secondly, it’s unbelievable to think that Dill would still take him out in this condition. And finally, it’s hard to believe that the husband would actually go. Understandably he’s on pain meds, but even still, there are some things that you just don’t do, and that your body won’t let you do.

Serenity is not a very good movie. That’s because this entire film relies on the twist. And it’s not an especially good twist. It’s an okay twist that isn’t handled in the best of ways. The first half that gives us clues about it is kind of interesting, because we keep trying to make sense of the clues and figure out what they mean. But then in the second half the twist is exposed, and that means there’s really nothing all that interesting yet to come. Now, this is not a matter of them exposing the twist too soon, because they kind of needed to do that when they did. Otherwise it would be just dragging that out for far too long. The problem is that aside from the twist, there is little else going on here. We don’t meet or spend enough time with either Karen or her husband to really care about them or their story, and everything seems pretty basic. This movie really doesn’t tell us anyone’s story besides Dill’s, and I suppose that is very intentional and the point (when you know the twist,) but it still doesn’t make for a very good movie.