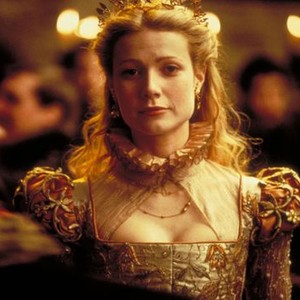 A pretty smart and fun movie, this one is occasionally tough to understand with the talk from Shakespearean times, but the references to how Shakespeare might have gotten the ideas for Romeo and Juliet make the whole experience pretty clever and witty.

A clever movie, this one chronicles the romance between William Shakespeare and a woman of nobility, Viola De Lesseps. The romance happens to spring up right as Shakespeare is writing and also rehearsing his most famous play of all time, Romeo and Juliet. Since Shakespeare is writing the play throughout the course of the film, lots of things that happen in the movie find there way into the play. This is one of the coolest things about the movie. The sharp way that people speak here, often using Shakespearian language, makes a good deal of the dialogue hard to follow, but there’s no denying that the story moves nicely and is filled with fun moments. The cast is top notch here and that really goes a long way to making this an enjoyable film.

Shakespeare in Love won the Best Picture Academy Award in 1998 over Saving Private Ryan. That’s a strange feat considering that Ryan is one of the best war movies of all time, and Shakespeare is just comical and poppy fun. But this movie came out in December and that one in July, and sometimes the time of year a movie was released is enough to make the Academy want to give the award to the more recent film, silly as that reasoning might be. Still, the movie is pretty good, and certainly entertaining enough with it’s witty dialogue and clever plot ideas.

This is the film of how William Shakespeare was a struggling playwright and ended up coming up with the play Romeo and Juliet. Supposedly at the same time as he was writing that play, he was falling in love with a woman named Viola De Lessseps. She was the inspiration for many of the ideas he included in this play, most notably the balcony scene. The movie has Viola play a boy in order to get an acting role in the show, (all actors were men at the time, and those playing female characters had to dress like a woman.) The idea of a woman dressing like a man was featured in the Shakespearian play Twelfth Night, and so this story supposedly inspired that one.

How much of this is actually true and how much of it was made up for this movie is anyone’s guess, but it is all pretty smart and fascinating. At the start of the movie we learn of two playhouses and how they each employ a different writer. Shakespeare writes his plays for one of these theaters and Christopher Marlowe (Rupert Everett, who unfortunately only gets one scene,) writes for the other. These two are vicious competitors, and the business of shows is booming. Nobility frequents the shows and that means the well-off houses all the way up to the Queen herself, (played by the great Judi Dench.)

The movie opens with the explanation about the playhouses and then the meeting of a character who owes a great deal of money to some loan sharks. This is Phillip Henslowe, (played by Geoffrey Rush,) and he owes the money to Hugh Fennyman, (Tom Wilkinson.) Say what you want about this movie, but it definitely has a fantastic cast. Of course most of these actors, from Wilkinson to Colin Firth, were in the movie before they were household names. Henslowe asks Fennyman to invest in his play and to see that if he does this he will receive all the profits for the play and will be paid back enormously. Fennyman agrees, and Henslowe goes to Shakespeare to get him to start writing.

Only Shakespeare has no ideas. He has no inspiration. Whatever he does have, a title called Romeo and Ethel, the Pirate’s Daughter, isn’t getting him very far in terms of a plot. It isn’t until his one meeting with the competition, Marlowe (Everett,) that ideas start coming to him. That’s because Marlowe gives him a whole ton of material to work with. Shakespeare spells out what he’s got so far, (which is next to nothing,) and Marlowe runs with it, releasing ideas left and right. He’s clearly the real talent in the room, and he gives Shakespeare a ton that makes it into the play, from the two warring households to the character Mercutio and his death. This Marlowe scene might be one of the best scenes in the movie, proving even more what a great shame it is that Rupert Everett’s character has to die. And how does he die? Shakespeare makes up a story, pretending to be Marlowe, that gets Marlowe killed by a jealous lover. What a way to say thank you for the story ideas.

The jealous lover is Lord Wessex, (Colin Firth.) Here’s the man of nobility who is set to marry Viola De Lesepps. It’s an arranged marriage made by the families and has nothing to do with love. But she, of course, is really in love with Shakespeare. The scene leading up to him finding out the truth about her, practicing lines with a boy named Thomas Kent, (who is really De Lesepps in disguise,) is fantastic. He is working out the things that he wants to say to Lesepps, with Kent being the messenger who will deliver the message for Shakespeare to the woman he is after. And as the two of them are getting heated with their conversation, Thomas Kent kisses Shakespeare and then runs away. The moments feels right, with us knowing that it’s really a woman and really the very woman Shakespeare is writing to, under the disguise, but since Shakespeare doesn’t know that, and thinks he just got kissed by Thomas Kent, the scene is pretty funny.

The movie is filled with colorful characters and clever scenes. Judy Dench as Queen Elizabeth is particularly memorable. Both she and Paltrow won oscars for this movie, and in the case of Dench it is especially well-deserved. She has a very limited number of scenes (maybe three,) and yet she steals every one of them with her commanding presence and way of speaking that shows both confidence and frustration with the stupidity of everyone around her. Queen Elizabeth is the most powerful figure in the film, and she shows it everywhere she goes. She is the most important audience member, and the one who makes all final decisions on matters of legal authority. Dench rocks the part beautifully.

On the less fortunate acting side of things is Ben Affleck, who doesn’t really get to do much with his part. Affleck was just starting out in his career when he made this movie, (his career as a known actor.) He broke out with Good Will Hunting, and then immediately followed that with Phantoms and Armageddon. Shakespeare in Love came right after those, and was in December, exactly one year after Good Will Hunting. Affleck was a rising star at the time, but he wasn’t exactly making good choices or good films, (Reindeer Games and The Sum of All Fears are two prime examples.) Here, in Shakespeare in Love, he is given the part of an actor playing Mercutio and thinking that Mercutio is the star of the play. The movie has some fun with this, but should have taken it even further, having Ned Allen, (the Affleck character,) freak out when he learned the truth about how far removed from being the star of the show he actually was.

The story about the romance between Shakespeare and De Lesepps works. This includes moments when she either gets caught or risks getting caught in multiple ways. It’s not easy to be a woman pretending to be a man, playing the part of another man in a play. De Lesepps is actually playing two parts at once during this time. First she is playing the actor Thomas Kent, and as Kent, she is playing the part of Romeo in the play. What doesn’t work quite as much are the references to Romeo and Juliet. Considering that this is Shakespeare’s most famous play, you would think the movie might have had more fun showing how each of the ideas for the play came about. Instead, they mostly come from that one scene at a bar with Marlowe, and aren’t even Shakespeare’s ideas. It would have been nice to see more development of these ideas, (the two warring households,) and how Shakespeare came to them, in a sort of Slumdog Millionaire kind of way, (that movie, another best picture winner, like this one, was all about showing us how the protagonist came up with the answers to the gameshow questions.)

Shakespeare in Love is a good movie, but it could have been better. The casting is top notch and the ideas are pretty clever. But the way of speaking makes the dialogue come out at rapid fire speed and with the sharp tongue and wittiness that isn’t always easy to follow. The story itself is pretty good, although it does fall into quite a few conveniences towards the end, including characters both joining and leaving the play at the last second. Still, what we have here is a movie that is clever enough to be about the life of William Shakespeare and smart enough to set it around the time that he was writing Romeo and Juliet. This is smart stuff, and the humor helps push it along nicely.