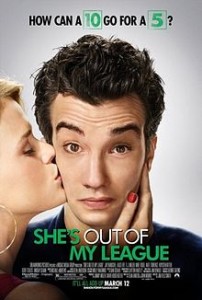 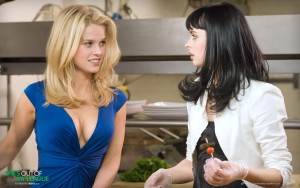 A pretty standard romantic comedy, that bases it’s whole premise around the simple idea that a really hot girl would not go for a dorky guy.

She’s Out Of My League is a pretty lousy romantic comedy. I suppose that seems obvious based on the elemtary premise and also the lack of casting. the movie stars but one name actor, jay baruchel, who is really a side player more than he is a star who can carry his own movie. I used to watch this kid on the tv show “undeclared,” about a decade and a half ago, and he never had that real star quality to him. probably because he always sounds like he’s whining.

for the rest of america, (not many people watched that show, even though it also featured seth rogen and jason segal before they were famous), baruchel probably started becoming known with tropic thunder. in that film, he had a significant role and was funny and entertaining. that was a movie where nobody could do anything wrong. and baruchel was probably about eighth billed or so, behind bill hader, danny mcbride, steve coogan, and nick nolte, not to mention the three guys who were the real stars of the film.

well, now baruchel has his own movie and it is pretty bad. He plays Kirk, a loser living a pathetic life with three friends who give him a hard time about his social life. he was dumped by a girl who he still desperately wants back. and this girl has basically been adopted by his own family, so that she is always at his house with his parents. it’s meant to be funny, but really it’s just ridiculous.

Kirk works at the airport doing security, and one day a super hot chick walks in and is harassed in some form or another by every male security guard in the building. This scene is actually funny, especially when kirk’s boss scans his tie clip instead of scanning her, just to get a beeping sound so that he can scan her even more. And Kirk calls him on it.

And then molly, the super hot chick who just walked through the airport, leaves her phone in one of those gray bins, and she calls it and kirk answers. molly’s best friend is a lot of fun here, telling a guy on the plane to shut up, asking him if he’s a plane doctor. but the funny moments are very rare in this film.

Kirk goes to meet up with molly when she gets back into town and they start dating. just like that. their first date is at a restaurant where one of molly’s exes shows up and takes kirk’s seat, mistaking him for a waiter. all of this is okay, somewhat interesting material, but ultimately the movie is going nowhere fast.

and so what we are given are a number of petty fights that become big enough to temporarily break these two up. the first comes when kirk meets molly’s father right after he has ejaculated in his pants and refuses to get up to shake the man’s hand. it’s right out of american pie, and of course totally amateurish that kirk would never excuse himself to use the bathroom and cleanup. but it’s all in there to lead to molly dumping him. temporarily.

kirk tells her the truth about what happened, and they’re back on. that is, until they have another fight, this one about how she’s so hot and a perfect 10 and why the hell is she with him? Is this really a fight? It’s obvious that molly is pretty, but if she really is the perfect girl, nice and fun and everything else, than what is kirk’s problem? He says his problem is that she’s only with him because he’s “safe,” but what the hell does that mean? That he’s not an asshole? This movie wants to act like it has something serious to talk about, but really there is absolutely no issue at all.

And so with an incredibly lame plot, we are left with only the humor of the side characters to get us through this film. kirk’s three friends are okay. more often they are stupid than funny. especially when one friend pulls down his pants to show off his balls and then another volunteers to shave kirk’s balls for him. and the filmmaker for some reason shows all of this to us. the side characters that are a little more funny are the people in kirk’s family. the dad with his “we only flush number twos” line, and the brother who insists on playing slapshot in the basement with kirk. most of this is garbage filler, but some of the characters are so over the top that they are worthy of a small chuckle.

the problem with she’s out of my league is that it really has nothing to say. it is based on the premise that you can only date someone two points higher than yourself at best. so if you’re a five, then you can only date a seven, and not a ten. and the movie does talk about how this ratings system is established, but it still feels very objective and artificial. i enjoyed the conversation better when barry pepper had it with phillip seymour hoffman nearly ten years ago in the 25th hour. there, it was just a brief conversation and more to the point, and not taking itself too seriously. here, in she’s out of my league, it is the whole movie. how stupid. I get that it was trying to be american pie, but it needed a much stronger focus on plot to even be decent. unfortunately it did not get this.