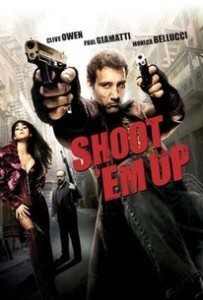 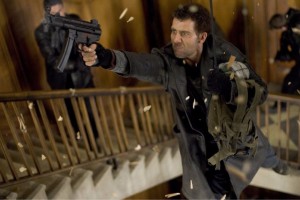 A dopey movie where the action is kind of fun, the humor is decent, but the story, characters, and everything else of importance is right out the window.

The action is sometimes fun, and the energy is on high voltage the whole time, but this movies lack of intelligence still shows through, every chance it can get. The story is built on a very thin premise and that’s done intentionally. This is the movie about a former black ops military man who sees a pregnant woman getting beaten by gangsters and steps in. Turns out these gangsters are hitmen, and they not only wanted the woman dead, but want her baby dead too. Our hero, Smith (played by Clive Owen,) now spends the movie taking them all on. It’s one action scene after another, which normally would be a good thing, but the action here is more focussed on comedy than choreography or realism. We get some pretty ridiculous scenes. The movie knows this, and does it all intentionally, but that can only go so far. And when it does attempt to give us some semblance of a story, or of reasoning for why this is all happening, (in the second half,) the movie completely falls flat on its face. This film is definitely entertaining and sometimes kind of fun, but it also plenty dopey. Not only is the plot kind of the dumb, but the characters and corny dialogue is as well.

Shoot ‘Em Up is a pretty stupid movie. The film is meant to exist on a bare bones premise, (at least in its first half,) and to simply be an excuse for Clive Owen’s character, Mr. Smith, to kill a whole bunch of armed hitmen. The amount of destruction this guy does without getting hit by a single bullet is comical. And it’s meant to be that way too. There is a lot of humor in these gunfights and the way that Smith executes them. Bur the choreography wears thin pretty quickly, as do the one liner quips that both Smith and the villain, Hertz (Paul Giamatti,) continue to utter. Pretty soon, we are just looking for answers, because this movie needs to do some explaining and can’t get away with not telling us anything forever. That’s when the answers do start coming, and they are so convoluted and weak that this movie would have actually been better off to not have given us any answers at all.

The film starts with Smith sitting on a bus stop bench as a pregnant woman who has been badly beaten stumbles down the street in front of him. A car pulls up, tires screeching to a halt, and a guy gets out waving a gun arounds and shouting curses as he goes after her. That’s when Smith reluctantly gets up, takes a bit of his carrot, and goes after the guy. He easily takes this one guy out, using his carrot as a weapon, but then a whole army of villains of pull up in cars and pursue Smith. Soon, we have our first action scene in an abandoned warehouse and then on a rooftop.

The action is partially entertaining and partially kind of dumb. For example, Smith slides around the floor on some spilt oil while firing away at any hitman in his sight. At another point, he shoots the legs out of a table, then runs up the table, using it as an incline, as he jumps through a window, over a group of bad guys. He lands behind them, spins around, and fires on them, killing them all. The idea here is that they never expected him to come from that way, and so they were thrown off, and that’s how he got the shots on them. The same idea can be applied to most action scene in this movie, like one where Smith falls from floor to floor dangling from a rope, firing at more unexacting guys on each new floor.

The movie tries to play this off with humor, having Hertz say things like “do we just suck, or is this guy really that good?” It’s the movie’s way of pointing out that they know how ridiculous this all is. Doesn’t help. There’s a fine difference between a guy like Jason Bourne, who kills a bunch of guys, and you believe he’s really doing it, and this guy Smith, who just keeps killing more and more armed men, racking up the body count. Especially when things happen at rapid fire pace in this movie to the point where they are almost trying to convince us that this is not believable at all. They want this movie to be more like a cartoon, comic book, or graphic novel. Case in point… in one moment Smith puts the baby down on a spinning wheel piece of playground equipment. When the bad guys show up and start firing on the baby, Smith shoots the wheel so that it spins. He doesn’t shoot at the bad guys or try to swoop in and rescue the baby, but instead fires in the babies direction himself to hit the wheel. Ridiculous.

That the movie knows these things are ridiculous doesn’t really make them any better, There is comedy throughout this movie, but more often than not, it falls kind of flat. There’s a whole sex scene choreographed to match with a gun fight so that while two characters are doing it, the man is also continually firing his gun at bad guys who bust into the room. And he and the woman never stop going at it. That’s the kind of humor that is in this movie. Another example is a rooftop sign that is right in the middle of a gunfight the hero is having with his enemies. Smith shoots out certain letters on purpose so that the sign reads… FUK U. Then Hertz shoots out some more letters so that it now reads FUK U TOO. This is the intelligence level of the movie.

What does work about the movie is its energy. The action scenes are fun, when they are not trying too hard to also be funny. The simple premise which kick starts the film is also pretty good. Smith is just a Good Samaritan. Nothing more. Nothing less. He helps a woman because she’s pregnant and being chased and beaten by scum bags. In the middle of the first gunfight, the baby pops out of the woman. Smith shoots apart the umbilical chord. In many ways the ultra violence and humor almost make this feel like it could be a Machete movie, (at one point in that film, Machete uses a guys intestines as a bunny chord to swing on the outside of a building and jump down from one floor to another.) This movie doesn’t reach that level of grossness, but it certainly has that same brand of humor.

Once the mother is killed, the baby is now in Smith’s hands and the men who killed the mother are still after him. He tries to leave the baby in a park, hoping someone nice will find him. No luck. The first nice person who shows up is shot dead by the villains. He takes the baby to a prostitute who specializes in paying customers drinking her milk. She doesn’t want to take the baby. When the bad guys come after her, and Smith shows up to save her, she realizes that maybe she should help him out. Now it’s the two of them on the run from these hitmen, along with the baby.

By about the halfway point of the film, the movie has exhausted us with its seemingly non-stop action and lousy dialogue. There’s only so many times you can hear jokes like “what’s the difference between this car and a porcupine,” or “why is having a gun better than having a wife?” There’s only so many times you can hear comments after a gunfight like, “he shot his load.” At that point, we do start looking for a plot. So far all that’s happened is this guy has rescued a baby and killed a bunch of hitmen who are after the baby.

That’s when the movie shows that it is aware of how the audience must be filling, and decides to give us some answers.Unfortunately, everything about the answers is bad, from the way Smith realizes them, (reading a newspaper covered in poop,) to the content of what they actually are. Without giving anything away, these answers are so convoluted and twisty just for the sake of being twisty that they actually contradict themselves. The people who are trying to kill the kid are doing it to get back at a certain character. Only later, we find out that they don’;t actually want to get back at that character at all. So doesn’t that defeat the purpose of them wanting to kill the kid?

It’s no surprise that the plot reveals and twists don’t add up. They are clearly forced together in the movies attempt to just come up with something fast, whether it actually makes sense or not. There has to be a reason why these bad guys are trying to kill the kid. So the movie makes up one, and it’s pretty terrible. How about if the bad guys are just trying to kill Smith because of what he saw with the woman they killed in the beginning? It would be a lot easier to explain these hitmen trying to kill the woman the, trying to kill the baby. This movie doesn’t;t have that level of intelligence. It simply wants to exist for the action scene, set to heavy metal or loud, pumping, ultra-fast music. This movie is occasionally fun, but more often than not, it’s pretty dopey.