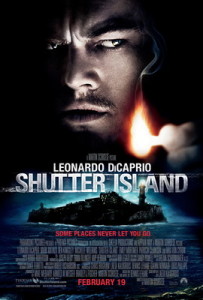 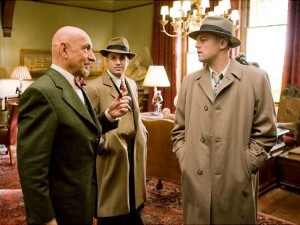 A gripping thriller with a powerful and deep mystery at it’s core.

Shutter Island is an absolute powerhouse of a movie. it’s a movie that is all about the experience. this is a deep, dark mystery that takes place in a very short amount of time while two detectives are on an island, stuck there during a hurricane. and on the island there is a mental institution (which seems more like a prison), where the detectives are running their investigation. only this isn’t a movie about being inside a prison or an institution. it’s a movie about being on the island. that includes the lighthouse and the docks and the cliffs and the caves and the woodsy areas, and yes, the three different buildings that make up the institution as well. and there’s also the building where the orderlies stay and another one where the doctor’s live. our characters go to all of these places looking for clues.

the mystery at hand is about a woman who disappeared. She is a patient there, named rachel solondzo, and u.s. marshall teddy daniels (leonardo dicaprio) is called in with his new partner chuck (mark ruffalo) to figure out what’s going on. the movie opens with the two of them on the boat, headed toward the island, as low bellowing fog horn sounds blare on the soundtrack and mix in with the music. the sounds are creepy and help establish the mood of this movie right from the start. and the way the two men stand on the deck and look out at the island as they approach feels like something out a hitchcock movie. especially when combined with these horn sounds and music.

i suppose the plot of being stuck on an island (the hurricane causes them to not be able to get off for a few days), while a killer or mystery is out there, is something like the agatha christie book, “and then there were none.” that book was a classic, about strangers stuck in a mansion on an island and it opened with the same kind of scene that this movie does. the passengers were all on the boat headed toward the island. but there were so many other great movies that used similar plots as well, and brought in the rain outside on gloomy stormy nights while the people were stuck inside a building. great mystery movies like clue. shutter island is right up there with them, using outside environment to it’s complete advantage.

Teddy daniels and his partner, chuck, meet the head of the institution as soon as they arrive. the man is played by sir ben kingsley and he seems to have a secret up his sleeve. he talks about how they have no idea what happened to rachel and it’s as if she evaporated straight through the walls. the whole thing seems a little too peculiar and we know that there is something we are not being told. did the institution have her killed to cover something up?

Next our two detectives go to interview the staff. they try to find out who was on call that night and who was supposed to be watching her door and how she could have possibly escaped without anyone noticing. none of it really gets them anywhere. and so the next day, the two of them go to interview the other patients. the ones who were in group therapy with rachel. this is where things start to get very interesting. some of the patients seem to be hiding a secret too, only they want to talk. they want to, but they are afraid to, and so instead they pass notes. it’s a funny situation, because this is a mental institution and these patients could very well be crazy. but there is also the possibility that they really do know something about what’s going on here, behind closed doors.

the movie is pretty fascinating from the very beginning, but it suddenly gets thrilling when teddy and chuck are out by a graveyard one night and get to talking. chuck wants to know about a name that teddy keeps asking the patients about. so teddy tells him about what happened to his wife and how the man who did it to her is here, at the institution, or was supposed to be until he disappeared. teddy is really here to find out what happened with that. apparently he’s been looking into the institution for some time, just waiting for the chance to get over there to investigate.

only chuck has another idea. he thinks maybe the institution heard that teddy was asking questions about them and they wanted to get rid of him. so they created this whole ridiculous rachel solondzo story just to get teddy to come over here, and now they have him trapped, exactly where they want him. just these ideas, including the one that rachel solondzo never disappeared at all and that the whole thing is made up, are pretty brilliant. and we are right there in the moment with the characters, almost afraid for them, as they clearly don’t know much about what they are up against.

This is the kind of movie that shutter island is. an absolutely wild thriller. a movie that feels like a rollercoaster ride from start to end. the environment and atmosphere of the film are top notch with teddy letting his investigation take him wherever it needs to go, and winding up on mountainsides and in hidden caves. i love that as the story moves there are bigger and better secret locations that teddy needs to get into. at the beginning of the movie there’s talk of ward c and how nobody is allowed to go in there. but about halway into the movie teddy finds a way to sneak in and get some more clues. after that, he’s onto the cliffs and the caves. and after that, the lighthouse.

This movie has so much energy and carefully structured artistry that it is actually scary. not in a horror movie way, but in a total thriller way where you just don’t know what’s coming, but know that it’s pretty freaky. i love when the two detectives go to see the head of the institution at his home one night and find another doctor there sitting by the fireplace having a drink in an armchair. this doctor is played by max von sydow and he’s fantastically eerie in the role.

the movie has a truly stellar cast and many of the great actors on hand here are only around for one scene. such is the case for patricia clarkson and jackie earle haley and ted levine. each of these actors dominates their single scene in a way that is completely memorable. it reminds me of true romance where christopher walken has one big scene and gary oldman had one big scene and james gandolfini has one big scene. only here, each scene fuels the mystery by providing more clues or ideas. Shutter island is a masterpiece of a film. it is a martin scorcese movie and between this and the departed, made only four years earlier, he is now making movies that are as good as some of his best work of all time. this is the guy who made mean streets, taxi driver, raging bull, and goodfellas. with shutter island, he has left the gangster world behind and given us an absolute creepy and mysterious thriller. it turns out to be a fantastic movie.