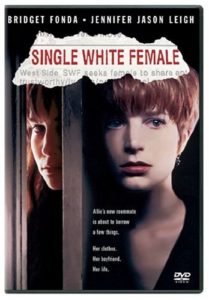 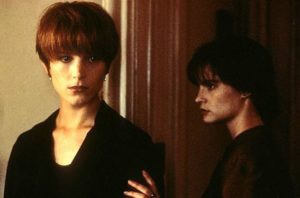 A cliched and predictable movie, this one might not be the smartest film, but it still has some real tension and is kind of a fun guilty pleasure film.

Not a very good movie, this one is enjoyable on a basic level, where you know you are watching a B movie and a guilty pleasure film, and just don’t care. It’s a late night thriller. The kind that works best when the mind is turned off, and you’re just watching for fun, hoping to get a few thrills in. The story is pretty generic about this woman who moves in and becomes the new roommate, but turns out to be a psycho. And Allison, our protagonist, slowly discovers that. She learns more and more about her new roommate, Hedra, and each thing she learns is darker and more disturbing than the next. There’s nothing creative or smart here, but as a movie that hits all the cliches and staples of this type of film, it’s actually kind of fun.

Single White Female is one of those early nineties movies about not trusting strangers. These characters seemed super nice, but it was all an act, and they turned out to be psychos. Sharon Stone made a couple of these kinds of movies, such as Basic Instinct and Sliver, and then there were the ones that toed the line between horror and thriller, such as The Hand That Rocks The Cradle. Single White Female is more like that. It’s by no means a good movie, and yet it’s kind of fun to watch as a guilty pleasure B movie. You know what’s going to happen and the movie telegraphs ideas to make them super predictable, but even still, sometimes it’s fun to just sit back, watch, and not think too hard. And this movie manages to do that while also adding in a couple of thrills.

At the start of the film we meet Allison, (Bridgette Fonda,) who is engaged to Sam, and rolling around in bed with him, happily in love. You wonder why in the world this woman would need a roommate, considering she’s living with the man she is going to marry. And no sooner do you start wondering that, does the phone ring, and Sam takes a call from his ex-wife while on speaker phone. Apparently he slept with her recently, and she says that loud enough for Allison to hear in the next room. Why would Sam have the phone on speaker phone in this situation, knowing that he just slept with his ex-wife? It’s amazing how fast Allison goes from being engaged to single, and needing a roommate.

And so the roommate hunt begins. We watch as Allison interviews a bunch of roommates, and this is basically the comedic part of the film. It’s a revolving door of weirdos. And just when Allison thinks she’s done interviewing, and alone, does Hedra show up. Allison is thinking about Sam and sitting on her kitchen floor, hunched over in a corner crying, and we see Hedra’s feet walk up. It’s so awkward and uncomfortable. If you’re Hedra in that situation, where you hear the woman crying, you come back another time. You walk out the door and come back in a few minutes. But Hedra walks right up and doesn’t even address the fact that Allison was crying with an, “are you okay?”

The two women start their interview, and when Hedra tries the sink faucet, it falls apart and starts spraying everywhere. Both women get their shirts soaked. We cut to about an hour or two later, and they are sitting around waiting for their shirts to air dry. At this point, they have spent so much time together (and Hedra was able to fix the kitchen sink right there on the spot,) that Allison offers her the apartment. Hedra asks about Allison’s boyfriend and the split and requests one thing… if Allison is going to get back with him and kick Hedra out, she wants to know now. Allison says there is no way that’s going to happen, and so Hedra moves in.

She watches as Allison gets phone messages from Sam and tries to ignore them. She also tries to be a supportive roommate when Allison’s boss tries to force himself on her at work. Hedra calls the boss up and threatens him in front of Allison. And Hedra gets a dog. Allison isn’t happy about it, and asks Hedra to bring the dog back, and Hedra agrees. But she sets a trap that night, locking the dog up in his room, and then not going to help him when he barks. Instead, Hedra leaves her door opened and watches as Allison goes to give the dog water. The next day, the dog is sitting on Allison’s lap as she’s working, and just like that Allison is hooked. The dog stays.

But then one day, Sam comes back. Hedra is actually the one who lets him in, which is strange considering how much she is against the idea of the two of them getting back together. But Sam gets in and he patches things up with Allison as Hedra watches from the elevator area windows. And just like that, the real trouble begins. Hedra watches Sam and Allison start spending more and more time together, and her jealousy erupts. When Allison spends one or two nights over at Sam’s without letting Hedra know, Hedra goes nuts. Allison walks in to find Hedra sitting on Allison’s bed in the dark. And Hedra yells at Allison for not letting her know where she was.

Things get worse. When Sam tries to fix a gate on their balcony, Hedra calls him away for breakfast. Then Sam and Allison leave and Hedra throws the dog over the side, making it look like he got out through the broken gate that Sam never fixed. She blames Sam for the dog’s death, since he said the gate was fixed, but it really wasn’t. And Allison starts trusting Hedra less and less.

Then comes the hair incident. Hedra takes Allison to a salon and both of them get their hair done. Only Hedra has a surprise. She gets the exact hair color and style as Allison. She walks down the stairs at the salon, to show Allison, and naturally Allison is furious. This drives her to start thinking she might be living with a psychopath. And so she goes into Hedra’s room, checks her closet and finds all sorts of things. Allison finds that Hedra has been borrrowing tons of her dresses, and also has a mysterious box filled with things.

Things escalate in the final act to the point of involving secrets and murder. Let’s just say Hedra had more up her sleeve when she got the hair style than just liking the way Allison’s hair looked. The way Sam factors in and basically comes between the two women is great. Exactly what Hedra was worried about happens, with Allison wanting to move back in with Sam, and therefore wanting Hedra to move out. And that’s what really pushes things too far for Hedra. Suddenly the real psycho comes out and there’s no looking back.

Single White Female is a movie with an agenda and a certain set of rules to follow, and it basically accomplishes its goal. It’s the worst of these types of movies because it offers nothing creative or new. But it does have some fun with the staples of this type of movie. Once in a while the movie veers far off track, (for example, there’s a scene where Allison follows Hedra to a sex club, and nothing ever comes of it.) The story with Allison’s boss is another situation that feels tacked on. But most of the stuff between Allison and Hedra works, and as a B movie, this one is a decent guilty pleasure film.