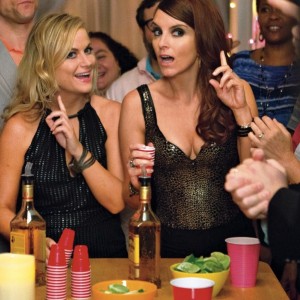 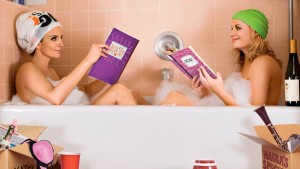 Like a really bad Saturday Night Live sketch, this one just repeats the same jokes again and again, and barely takes advantage of having an R rating.

Here’s a movie that pretty much does everything wrong. It’s a film about a one night party, that tries to be an R rated movie without actually putting in any effort at all. In other words, the lack of attempts at going for anything worth that rating would have better suited this movie as a PG13 film, like Can’t Hardly Wait. There’s no talk of sex or nudity or anything like that. Instead, this movie wants to pretend that it is smart and about characters. Only it’s neither one. It’s certainly not smart, with its repetition of jokes that aren’t even funny the first time. Like Bobby Moynahan doing a Scarface impression that nobody gets. The story is about these two sisters that find out their parents are selling their childhood home and decide to throw one last party there. That’s about it. This storyline is paper thin. That wouldn’t really matter if the jokes were decent, only in this movie, they’re not. The film seems to be trying to make a statement that not every comedy about women needs to be about sex, and that’s fine and true, but then this movie shouldn’t have sold itself as a comedy that plays in that ballpark. Between the false advertising, with the two girls in the tub together, and then much of what they showed in the trailer, it’s just one more reason to be angry with this film.

Everybody loves Tina Fey and Amy Poehler. They are two of America’s smartest and most charming female comics. We loved watching them crack jokes on Saturday Night Live. Now we love watching them host awards shows together. But what we don’t love is their movies. These two are light-hearted, made for TV personalities, (as shown by 30 Rock and Parks and Recreation.) When it comes to make R rated comedies, however, they are just not on the same level as an Amy Shumer or a Kristin Wiig.

Sisters is the second attempt by Fey and Poehler, to make a movie together, and it is even worse than the first one (Baby Mama, from a few years back.) It’s a movie that fails on all sorts of levels, and the biggest of which is that it’s just not funny. There was another R rated comedy out this same year, about crazy, party loving siblings, called Mike and Dave Need Wedding Dates. That movie blew this one away in every category imaginable, because it didn’t hold back and knew that making the audience laugh was the most important thing.

There are two major problems to Sisters. The first is that it doesn’t use its R rating at all. The second is that it repeats the same jokes again and again, in the same moment. The storyline is barely decent. The characters are okay. But it’s the lack of humor that really hurts this movie most. And with a comedy, humor is really the most important thing.

An R rated movie, these days, needs to be R rated for a reason. And that reason can’t be just cursing. It has to be either for hardcore violence or for sex and nudity. With comedies, it’s mostly the sex and nudity. Look at Bridesmaids and Trainwrecked. Both featured the characters having sex. In fact, Bridesmaids opened with it, with Kristin Wiig and John Hamm going at it in bed, doing all kinds of funny positions. In Sisters, sex is nowhere to be found.

Now, it’s one thing to not feature any moments of characters having sex. It’s another all together to not even talk about sex. That’s where Mike and Dave comes in. Sure there was no actual sex, but there were plenty of suggestive scenes (like the sauna scene with cousin Terry, or the sensual massage that featured oil and nudity.) In Sisters, the closest we come to anything like this is Maura (Amy Poehler) dripping hot wax on the chest of James, the guy she likes, (played by Ike Barinholtz.)

Its as if this movie is out to make a statement. That statement is that comedies about women don’t always have to be about sex. They could be about family and responsibility and being adults. This is true, but then get the hell out of the R rated sandbox and go play somewhere else. Don’t pretend to be something you’re not. And if you look at the posters for this movie (featuring the two women in a bathtub together,) or watch the trailer (where they try on different outfits and show lots of skin,) you know they are trying to make it look like there’s sex in this film, or at least that there’s some talk about sex. It’s a total scam.

If this movie does not feature sex or nudity or even conversations about them, then what does it feature, and why is it rated R? Cursing. That’s about it. Cursing and drugs. The story is about these two adult sisters who find out their parents are selling their childhood house and decide to throw one last party there, before the place is gone. It’s a very thin premise.

To make matters worse, the characters aren’t anything special. Maura is likable as the goody-goody who manages to tow the line in such a way that you sort of feel bad for her. But Kate (Tina Fey,) is another story altogether. She’s the irresponsible one, and in this movie that simply means she doesn’t have a job and has a teenage daughter. That’s about it. The way this movie shows her being irresponsible, (accidentally bleaching a customers eyebrows,) is embarrassingly unfunny and feels like something out of an Adam Sandler movie, (the plastic surgery mishaps in Just Go With It.) This movie is pretty much on the same playing field as those sorts of films.

The story is about this one night party the sisters throw, and that’s a fine enough premise that often works, (Project X, Can’t Hardly Wait,) but it sure doesn’t work here. There’s nothing interesting that happens at the party. Watching Bonny Moynahan do a Scarface impression a thousand times, and people throwing out random guesses about who he is imitating, just isn’t funny. Neither is the way this movie repeats every joke about ten times, usually in a row. From the joke about not being able to say the masseuses name right, (May Wan,) and then her not be able to say their names right either, to the girl watching them try on dresses who keeps repeating the same catchphrase, this movie is tiring and dull.

This movie fails on all sorts of levels. It refuses to play the R rated comedy game and give us anything worthy of that rating. It doesn’t even attempt to come up with funny scenes. And it repeats the same jokes again and again, like an annoying four year old. When the most risqué thing in an R rated comedy is the drawing of a penis, you know there’s something wrong. Boy was this movie a waste of time.