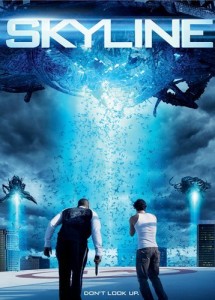 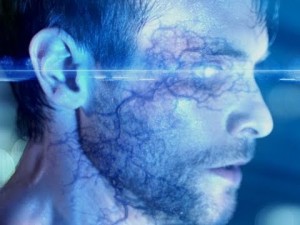 It wants to be cloverfield meets war of the worlds, but with nothing new to offer and a lot of recycling of the same usual cliches, it just can’t compete.

Skyline is an alien invasion movie that feels like it could have been a direct to dvd or made for tv movie. it really feels like one of those cinemax softcore porno movies where the plot is about an alien invasion and the effects are corny and fake as hell. something like cleavagefield. of course it’s a little better than that, but the fact that it resembles those movies is a problem. it’s an alien invasion movie that doesn’t have much new to offer the genre. and it’s a movie made by two brothers who are computer wiz’s, make commercials and music videos, and somehow think that means they can make movies.

the movie is about a young couple that goes out to l.a. to visit a friend (donald faison of tv’s scrubs). faison has the intention of seducing the couple with his wealth and lifestyle and convincing them to stay in l.a. none of it really matters. like all alien invasion movies, all that’s really happening here is they are trying to give us characters to care about, by setting up the way they are in their lives before any of the alien stuff starts to happen. sometimes it works. in this movie it doesn’t. that’s because the guys are forgettable and the girls aren’t really even characters at all, but more like extras. there are too many girls staying in the apartment (all of them models, of course), to the point where they get confusing and easily mixed up with each other.

the movie opens with the morning of the invasion. we see a character go to the window, stare into the blue light, and have his face turn black. all the while there is the noise of the radiating light and a woman screaming in the background. cut to a plane with everybody nice and calm. do you think there’s going to be a screen title that says something like “10 hours earlier?” you bet there is.

this movie hits every cliche in the book. it tries to go for humor with the donald faison character, but gets none out of it. we watch them sit in the apartment pool and sip their drinks with the blue skies overhead, and it’s great imagery. living the life. but it means nothing and adds nothing to the plot.

and soon we are in the morning. the alien invasion day 1. blue lights or laser beams shoot down from the sky. one guy staying in the apartment stares into one of them, has his eyes and face turn black, and then just disappears. jared, the guy visiting l.a. with his girlfriend is next. only faison comes and wrestles him to the floor before he can disappear. and now the black stuff on his eyes disappears.

the kids don’t know what to do, so they go running through the building. faison and jared go to the rooftop and watch some of the invasion from there. this gets us our cover shot. the poster image of the two guys just standing there watching it all in their vests and undershirts. it’s a cool image and was enough to get my attention as well as anyone else who saw the movie, i’m betting. i like that, instead of just featuring an alien ship, it showed two people there, giving us perspective. but what are we talking about here? a poster? when you have to spend a movie review talking about it’s poster, you know there isn’t a whole lot in the movie to talk about.

the guys go back inside and talk to their girls. then faison goes to check on an old man neighbor. an alien ship or creature comes into the apartment and scans the place and when the old man’s dog jumps out of his hands and the old man goes after him, that’s it for that character. faison runs away.

this is pretty much how the movie goes. just running in and out of and around the apartment building. at one point they try to take cars out, driving out of the garage. that doesn’t work out so well for them. so then they’re back in the building again. that’s a big mistake of the filmmakers. never have the characters go back to somewhere they have already been. especially if the whole movie has taken place in that location so far. it’s like we were teased with the idea of them finally getting outside, finally getting a breath of fresh air, only to turn around and go right back in.

the movie then gives us aerial dogfights where not only is it right out of independence day, but here you can’t even tell which planes are ours and which are theirs. the main characters end up wrestling with these aliens or alien ships on the roof top, slicing at them with an axe. it’s all pretty pointless. a major problem with the movie, just in the effects alone, is that you can’t really tell if we’re looking at an alien or an alien ship. are these little alien ships that come into the apartment or are they the aliens themselves? It’s something that both independence day and war of the worlds got right, having the aliens wear a suit of armor of sorts and then take that armor off. here, in skyline, we don’t get any of that. that’s because these two brothers probably didn’t have any physical creature models at all. they just had computers. so they probably didn’t give much thought into what their aliens looked like, other than giant robotic machines with tentacles.

the movie is a lost cause. it’s not the worst thing in the world, simple because watching aliens attack and humans try to fight back is always a little fun, but this is absolutely the worst alien movie I’ve seen (and i didn’t really care much for war of the worlds). that’s because this movie really brings us nothing new. the plot is weak, the characters are one dimensional (if that), and even the aliens don’t have a lot going for them. the final portion of the movie which feels tacked on, just makes the experience even worse. this movie was a disaster