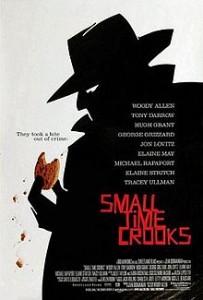 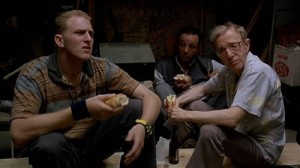 A funny and clever little film about criminals who become business tycoons.

Woody Allen is a talented filmmaker who too often forgets that story is everything. luckily for him, Small Time Crooks is not one of those times. for decades he made movies that were filled with jokes, yet had nothing really going on in the plot department. even when they did have story lines, they were either things that we had seen before, or just didn’t really care about. i’m talking about movies like deconstructing harry or the curse of the jade scorpion. Small Time Crooks is probably one of his only good movies that he made during this time period. that and mighty aphrodite.

allen knew that he had reached his end with these kinds of movies, which is why five years after Small Time Crooks, he started to reinvent himself by making movies about characters in europe. his best movie of that period was his first one overseas… match point. that film was a tremendous deviation from allen’s usual movie, going for dark crime thriller instead of light hearted comedy. Allen’s next movie, vicky, christina, barcelona, was also great, and so was midnight in paris, which came a little later on. this was a director branching out, showing off his talent and skill. but allen will always be most known for those decades of comedy, and Small Time Crooks is one of the better ones from that time.

the movie is about ray and frenchy, a new york couple with big plans. ray is a former criminal who spent time in prison. now he’s out and wanting to get back to crime. and frenchy doesn’t exactly support him, but she goes along with it. at the start of the film, ray is at a candy shop looking for the perfect kind of Chocolates to get frenchy that will go over well with the news he has to give her. he spends time talking to the guy behind the counter, bickering and deciphering and that woody allen nervous and indecisive way, all over what kind of Chocolates to get.

the news is that ray is having some former criminal friends over to discuss a plan. their plan is way too simple and ridiculous, and that’s probably because ray is the brains of the operation. he’s the smartest of the group, and that’s only because the other guys are a bunch of dummies. there’s michael rappaport whose about as smart as a pile of bricks, and tony darrow (from goodfellas and countless other gangster movies), who isn’t much brighter. ray was always called the brain in prison, but that doesn’t mean he was all that bright. especially when he was called it by these guys. he’s just the only one who isn’t a half-wit in the bunch.

the plan is to buy a store that is across the street from or a few stores removed from a bank. the store will be a bakery that is run by frenchy (tracey ullman, doing a very fun bronx accent). she loves making cookies and now will have a place to sell them. but all the while, down in the basement, ray and his crew will be digging a tunnel through the wall that will lead them straight into the vault of the bank. this is like the movie sexy beast or the bank job, only played as a comedy instead of a thriller.

the boys have to run through a few obstacles at first such as bringing the guy who already has the lease to the place (john lovitz) on board. he’s a former criminal who spent time in prison with them and gladly joins in. another problem comes when they drill the wall and hit a pipe and get blasted with a heavy stream of water that just won’t stop. this is funny stuff. when the guys talk about turning their hard hats backwards because it looks cooler, even though the flashlight is in the back, it’s not nearly as funny. that’s woody allen for you. hit and miss.

the movie takes an interesting turn when the c0okies end up taking off and becoming a monster success. the bank operation is a bust, but the cop who catches them in the act has a better idea. franchise. he convinces them to sell open up other cookie stores and then factories and mass market their product. and they do, and become incredibly rich from it. at this point, the movie is only a third over. only thirty minutes of the hour and a half running time have gone by, and our characters are already rich. if only the next two thirds of the movie packed as much in as that first third did.

the rest of the movie is about the two of them dealing with their wealth and success. it starts with a video that shows a behind the scenes look at the factory and the company and all of their empolyees. we get to see each of the former crew members now in a high profile management job, and that’s kind of funny, but what we don’t realize is that it’s nearly the last time we will be seeing those characters. too bad, because they were a lot of fun. the scene where they first came over ray’s house and tony darrow kept repeating out loud what ray had told him over the phone about frenchy was hilarious. but now these characters are pretty much gone.

they are replaced by guys like hugh grant’s upper class character who realize right away that ray and frenchy don’t belong in this world. grant’s character, david, has a plan up his sleeve, and ends up becoming the villain of the movie. ray, meanwhile, decides that frenchy is growing apart from him with her interest in this upper class lifestyle of art, architecture, and the rest of the finer, elite things. a lot of this reminds me of midnight in paris, actually, with owen wilson’s fiance drifting towards another man who was more intellectual and willing to take her around to museums.

i like the decision that ray makes of who to pick as a new romantic partner, and the fact that he doesn’t really care about brains and just wants somebody who he can be himself around. this might not be the usual hollywood situation, where everything is perfect, but it is much more true to life, with ray choosing someone that he never has to worry about trying to impress. still the movie definitely goes downhill as it goes on. the first third was absolutely the funniest and after that it became just okay, and kind of average. i do like the way the movie was totally unpredictable, and how the things that ended up happening seemed completely out of reach from the start of the film. i also liked the way they happened early on, leaving us with a “where the hell are they gonna go from here?” feeling. but the problem is that what they had in store for us wasn’t nearly as great as the world we were leaving behind. if only the later parts of the film had measured up to the earlier parts, this movie would have been a lot better.