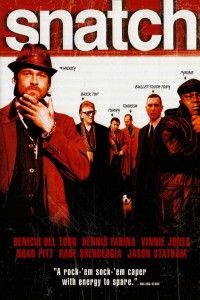 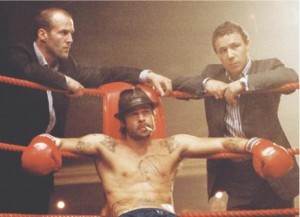 Quick paced fun through a movie that is as much about style as it is about story, as crime world characters cross back and forth into each others lives.

Snatch is Guy Rithcie’s follow up to lock, stock, and two smoking barrels and it’s not quite as good. It’s got the same rythm and structure of that movie, which is to say a lot of characters with different story lines that all tie in together, only for some reason in Snatch a lot of these characters seem more cartoony than dreadful. plus, in lock, stock, at the end of the day, it really was just one story with a number of different threads that all weaved in together.

In Snatch, there are clearly different stories going on. And one might say that in that way, guy ritchie was starting to brance out with this film. it wasn’t just about the underground life of thieves and drug dealers, the way lock, stock was, but about boxing promoters, diamond dealers, and yes, of course, killers and thieves.

the movie opens with a diamond Heist where a pack of men dresses as hasidic jews end up throwing off their disguises and pulling out guns. led by benecio del toro doing a fun yiddish accent, they steal a massive diamond and then go on their way. Benecio’s character, frankie four fingers, is headed to london.

the character name is one of many that give this movie it’s sort of campy / comic book feel. nearly every character has a nickname, from brick top (reminiscent of the dick tracey villain flat top, at least in the sound of the name), to gorgeous george, to bullet tooth toney, to boris the blade to doug the head. If a character doesn’t have a nickname, than it’s just a single name like turkish or tommy or sol. And these names, combined with an intro song that freezes on each character as their name appears in giant colorful letters on the screen, really gives the movie it’s initial pulpy / silly feel.

But as the movie goes on, we quickly realize that while not as gritty and saturated as lock, stock, it is certainly as morbid. characters die in horrid ways and one crime lord in particular owns a pig farm just because pigs are good at disposing of dead bodies. the plot of the movie centers on this diamond that is brought to london by frankie and then stolen by sol and his partners, who were hired by boris the blade (called just “the russian,” by most people.)

The other main plot of the movie involves Turkish (Jason Stratham) as our protagonist boxing promoter, a guy with a witty tongue and rational sense about the ridiculous antics that are going on all around him. especially when he finds himself at a piker camp (gypsys) negotiating the purchase of a caravan. It’s actually tommy who goes there for the negotiation, turkish’s right hand man, but an argument leads to a bare knuckle fight with brad pitt and the fight leads to a need for a new boxer. and that’s where turkish and brad pitt meet each other.

Brad Pitt’s character mickey is the highlight of the film. yes, he is but one of many characters, and has no more screen time than any other, but he is both the biggest actor in this movie, and also the most electric character. His piker is extremely hard to understand and that’s one of the running jokes of the movie. when you are able to make out what he’s saying, it’s usually very funny.

Turkish lends boxers out to brick top to participate in his fights. so now turkish is lending out brad pitt’s mickey, despite him being completely unpredictable and unreliable. meanwhile, the two jewel thieves, sol and vinny are hired by boris to steal the diamond while robbing the bookies at the boxing match. and it’s in this way that their story gets crossed with the brick top story. when they rob his bookies, he makes it a point to find out who they are and to come after them.

While sol and vinny never get mixed up with turkish or mickey, they come as close as to both have interactions with brick top as he factors into both stories. and other then that, their stories run separately with little connection. And that’s a good thing because what we are essentially getting here are two stories for the price of one.

Brad Pitt’s Mickey carries on through multiple fights that are often shown in great detail. the final fight serves as the climax for the film. and then there are some surprise moments, such as what happens to mickey’s mom and the way that mickey responds. and while all of this is going on, benecio del toro’s cousin avi (dennis farina), hires bullet tooth tony (vinny jones) to find the diamond and he goes after sol and vinny. only he also finds himself dealing with boris the blade. when all of these characters find themselves stuck in a tight narrow hallway with raised guns at each other, you know guy ritchie is at it again. Snatch might not be as great as lock, stock, but it is still a lot of fun. and as far as I’m concerned, it is one of four british gangster movies of the last ten years that has revitalized the genre. those movies are lock, stock, then Snatch, then layer cake, and finally rock n rolla. they are all connected, with three of them by guy ritchie and the fourth by ritchie’s former producer, matthew vaughn. and they are all tremendous films. Snatch might be the weakest of the bunch, but it is still extremely light, comical, and entertaining.