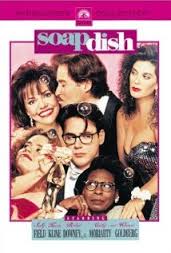 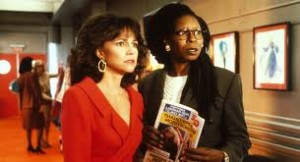 A pretty enjoyable and witty movie with a really great second half.

A very funny comedy, this movie works because of its storyline, more than anything else. The plot here involves a bunch of soap opera actors who are jealous of each other and ready to stab the others in the back at the drop of a hat. Throw some major twists into that toxic environment and suddenly the ball gets rolling real fast and never slows down. Sally Field stars as Celeste, the leading star of her show and most hated one in the cast. One actress in particular, as well as the head writer who is wrapped around her finger, plan to sabotage Celeste by writing material for her that is bound to make the public hate her character. What they can’t predict is that the true secrets which will come out from this, are far more scandalous than anything they could have written. By about the half-way point in the film, the first of the major twists is on the table, and from there, it’s just full speed ahead, no turning back. The second half of the film is where things really start to get good, and the movie gets the opportunity to show off just how clever it can actually be. This is a very enjoyable film.

Soapdish is a very comical and different kind of romantic comedy. In fact, it hardly fits into that genre at all, with whatever romantic elements there are, completely saved for the final act. In its place, what we have here, is a movie about a unique world that we are completely new to, (the world of soap operas.) The movie is all about relationships and backstabbing. There’s a lot of planning, manipulation, and hiding of secrets here. The characters are funny and devious, but by far the best thing about the movie is the way it becomes a sort of practice in irony, with elements of the show they are making, appearing in the character’s own personal lives. It’s a situation where art imitates life, and it is all played for a lot of humor and fun.

The first half of the film is almost entirely composed of buildup. There’s a lot to establish, and secrets that will come out in the second half, but need the proper setup to be fully appreciated. In order for the true weight of these secrets, and what they mean to the characters, to really be felt, the movie takes its time developing the characters and relationships first. It also takes its time introducing everyone, making us wonder about certain characters, instead of divulging everything all at once. So, when we meet Jeffrey Anderson (Kevin Kline,) for the first time, for example, we have no idea who he is or what he will have to do with this plot. Soapdish spends so much time on establishment, that it doesn’t truly take off until the second half. The first half of the film is good, but the second half is great. That’s where we get the movie within a movie angles where real life reflects the events on the television show and vice versa.

The movie begins with an awards show, the celebration of achievement and awards in the soap opera industry.  We meet the characters as they step out of a limo and are introduced by a news reporter who telling us exactly who we are meeting. There’s David, one of the head writers on the show, (played by Robert Downey Jr.) He is accompanied by there are two actresses who are featured on the soap opera show. These are Montana, (Cathy Moriarty,) and Ariel, (Teri Hatcher.) The reporter begins interviewing David, but turns her attention away the moment that Celeste, (Sally Field,) arrives on the scene. David definitely feels snubbed in this moment and you can see it on his face.

Celeste is the star of the soap opera. She’s the one who wins an award at this ceremony, and she thanks the others, including her head writer, Rose (Whoopi Goldberg.) Rose is the only one who actually supports and is happy for Celeste. With David and the two women who accompanied him, when Celeste thanks them, they make angry comments about her under their breath. We can tell that this is a pretty toxic environment, right here in the opening. First the way that Celeste stole David’s thunder during the interview, and now these comments and names that her castmates call her. Things are about to get a whole lot worse.

Before we get to this point, where characters actually do plot against each other, Celeste returns home from the awards show to find that her boyfriend has left her. And while at the awards show, we meet Jeffrey Anderson, a man who is stuck in a rundown theater in Florida, performing for crew members who don’t even know his name. Anderson watches Celeste on TV, at the awards show from a television set they has a cockroach crawling on it. It’s a quick scene of him looking miserable and calling out to the crew members that they should stop calling him by his character’s name and actually learn his real name. We are definitely left wondering who this man is and what he has to do with anything.

When Celeste arrives on the set, the next morning, she is miserable. Her boyfriend has just moved out and broken up with her via answering machine message. We saw the moment when Celeste arrived home, the night before, to learn this. Now, on the set, Celeste complains about how much she hates her wardrobe. She also vocally expresses to Rose that she believes David and Montana are trying to sabotage her. She couldn’t be more right. We find out that Montana has a hold on David and is putting him up to writing scenes for Celeste that will make the audience hate her. Together the two of them scheme and plot to try and figure out story lines which will be terrible for Celeste’s character and turn her fans against her. They want her off the show, and this is their way of achieving it.

Rose takes Celeste to the mall to help cheer her up. They have a routine that they like to pull there, where Rose pretends to be a fan walking behind Celeste who notices her and makes a big scene about it. She demands Celeste’s autograph and makes a whole lot of noise. This leads to numerous other people coming over and swarming Celeste for autographs and photos. It is all completely fake, since these people would not have recognized her on their own. Still, this makes Celeste feel loved and popular and is kind of like a cheap way of giving herself a little pick-me-up, even if she and Rose have to cheat in order to achieve it.

Back on the set, Montana and David begin to put their ideas into practice. Montana has a hold over David, and uses his desire for her, to get him to do and write whatever she wants. They start off by plotting to have Celeste’s character murder a homeless person in a soup kitchen. At the same time that they are planning this and Celeste is hanging out with Rose at the mall, a young actress makes her way into the casting offices and sneaks into the private office of the head casting director. This actress is Lori Craven (Elizabeth Shue,) and her timing is perfect, since this casting director needs to find a new homeless person right at that moment. Lori gets the job. The day of the shoot arrives and a surprise is revealed about who Lori is in relation to another character on the set. This is only scratching the surface of the surprises that are yet to come.

When the real relationship between Laurie and her Aunt spoils the plan that Montana and David had cooked up, they come up with another one. They will have Montana’s character be Celeste’s daughter. That will suddenly make Celeste seem incredibly old. On top of that, they dig up Celeste’s former lover, whom she had a terrible break-up with, and bring him back onto the show. And they make him have a romantic fling with her neice. This is one of those moments where art immitates life, as Jeffrey Anderson, the man they have dug up, is actually going out to dinner with Lori at the same time that his character is supposed to be dating her on the show. It all leads to Celeste spying on them and having a great moment of becoming trapped on a falling fire escape.

The twists get even bigger. If you thought it was surprising to learn that one character was another one’s neice, just wait until the dark secrets actually come out. There’s one, in particular, involving who a character actually is, that is so wild and deceptive, it changes everything. Especially for three of the characters who suddenly find themselves in roles they never expected. The plotline of the show continues to be mirrored and parallelled in real life for these actors, as the storyline about Montana being Celeste’s daughter turns out to have some deeper meaning than it at first seemed. There are some truly outrageous surprises here and every one of them is handled with perfect buildup and fantastic timing. This is a very smart film that has fun playing with the audience and taking them on a ride.