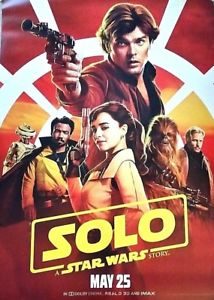 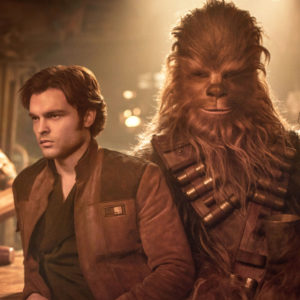 Better than expected, this movie isn’t especially creative or innovative, but it gets the job done and definitely has the traditional Star Wars feel.

This movie is actually kind of fun. It’s far better than both Rogue One and The Last Jedi, two movies that were more flawed than they were well-made. Here, we have a B movie version of Star Wars that knows what it is and doesn’t try to hide it. The darkness of Rogue One is replace by lots of yellow colors, and the weak attempts at humor or meta storytelling that The Last Jedi offered (Rays parents were nobody’s,) are nowhere to be found here. Instead what we get are cool creatures and robots and the closest thing to the feel of the original trilogy that we’ve gotten yet. But what’s missing are fun characters and lively action. Alden Ehrenreich does not seem like Han Solo at all, (he’s always smiling, whereas the Solo we know is angry and gruff.) And other than the train heist scene, the action is pretty forgettable. On top of that, there are more double crosses here and probably in any other film (sorry Wild Things, but your record has long been surpassed.) All makes for a mixed bag. More fun than some of the other recent Star Wars films, but not without some flaws of its own.

Solo: A Star Wars Story is a pretty decent movie. That’s surprising considering the debacle that went into making it, (it’s two directors were fired and replaced by a more traditional, old school one,) and also how much Disney rushed it to get this movie out fast. It’s also surprising considering how poor the movie did at the box office, which generally does have some merit in terms of word of mouth and whether the general consensus is that a movie is worthwhile or not. With the critics, the movie did fine. Nothing special, but nothing horrendous either. And as it happens, the movie is actually pretty good. Sure, it might have been terrific if kept in the hands of directors Phil Lord and Chris Miller, (the 21 Jump Street Movies and the Lego Movie,) but the producers didn’t like how much these guys were improvising and telling their version of the script, which you better believe was putting humor first. And so they canned the directors and brought in Ron Howard to reshoot about half of the movie. And the result somehow manages to be pretty enjoyable.

This movie is actually better than the last two Star Wars films released. As of now, since Disney bought the properties and started putting out new movies, there have been four films. The Force Awakens, (the first of the four,) is still the best. JJ Abrahms had a vision for that film that he was fully able to execute it. He had the creativity and energy needed for such a job, and boy did he deliver. But after that, we got Rogue One, which was bleak and dull, and way too dark for it’s own good. Then we got The Last Jedi, which just seemed to keep making all the wrong decisions. At least it wasn’t overly dark like Rogue One, but the storyline there continued to disappoint as the movie went on. And now we get this rushed version of a prequel that nobody was asking for (kind of. like when Fox made the prequel movie, X-Men Origins: Wolverine, shedding some light on a character who people loved because of how mysterious his past was. Solo is the same way. We don’t need to know how Solo got to be the way he is, and why he’s so jaded about the world. But this movie is going to tell us anyway, and considering that it was an unnecessary film to make, it’s not half bad.

The movie works because it does right what those other recent films have done wrong. The Star War series is now in it’s third trilogy, and there are two spin off films to go along with it. The second trilogy, (the prequel films) were commonly known as the worst ones. With those movies, the effects were so fake looking that many characters and actions just like drawings. The acting felt like watching cardboard and the humor was meant for dopey kids. But starting with Disney’s entering the picture, and their first movie, The Force Awakens, those fake looking effects went right out the window. Suddenly we were getting back to putting real actors in costumes to give them a sense of realism. And when costumes weren’t used, then motion capture was, to capture that real vibe.

The first thing that Solo does right is that it feels like a Star Wars movie, (like one of the original three films,) with the voices that alien creatures use and noises that droids (robots) make, being spot on. Getting the sound right seems like an obvious thing, but with how much technology has advanced in the decades since the original Star Wars films, it’s not surprising that filmmakers would have wanted to update the sound quality and make it more up to today’s standards and capabilities. That was exactly what the mentally behind computerizing all the characters in the prequels was all about. But people don’t want that. We don’t want to see a version of a Star Wars film that doesn’t look anything like a Star War films. Instead we went to see it look as closely like the others, (and like it belongs,) as possible. And this movie goes for that.

The other things this movie gets right are the colors, music, and references. The colors are just right. They aren’t super colorful or anything, but more yellowish, and that’s completely fine. So long as they aren’t dark, like in Rogue One, there are no complaints. The movie has a lot of light and that helps add to the fun spirit and tone. And, also unlike Rogue One, the movie brings back the original and classical Star Wars music. Granted the song is sped up a little, for a new remix or cover, but it is still same music that we know and love, and that goes a long way. And then there are the references. They are all over the place here, from the origin tale of Chewbaca and his outfit to Lando Carrisian and the Milenium Falcon spacecraft.

The story isn’t all that bad either. Granted, it’s a little annoying to see an always happy and smiling Han Solo, when we are used to the hard edged version of the character, played by Harrison Ford, but the whole point of the movie is to show how he got that way, and so it makes sense. As played by Alden Ehrenreich, (so great in the Coen Brothers movie Hail Caesar,) Solo is a rebel who does these mischievous things for both money and for fun. He is born and raised on a planet of slaves who work for an alien queen. He has a girlfriend,, Qi’ra (Game of Thrones star Emilia Clarke,) who he plans to escape the planet with, and live a happy life elsewhere. And he has the means to do it, bribing a gate official who lets them through. Only he actually makes it and Qi’ra doesn’t.

Now Solo joins the military, where he learns to become a pilot. And then he becomes a smuggler and tries to join a couple of other smugglers (played by Woody Harrelson and Thandie Newton,) who are doing a heist. Instead, they have him thrown into a pit to face the beast. And guess who the beast turns out to be? By the law of easy way outs, Solo happens to be able to speak Wookie, and this helps him escape and befriend the beast. And having a wookie as a friend suddenly makes him appealing to those smugglers who now want him on their team. They now prepare to pull off a train heist of sorts against a bunch of soldiers with magnetic boots that leads to the best action scene in the entire movie. Not only are these guys and their magnetic boots pretty cool, but so is the train itself, with all of its outrageous twists and turns during a snowstorm.

But the real story doesn’t start until we learn who Becket (Harrelson) was working for, and suddenly have a sense of who all characters are in the story. Becket is working for a gangster named Dryden Vos (Paul Bettany,) and he’s got a connection to Solo’s old girlfriend, Qi’ra. The rest of the movie is about them doing jobs for Vos and then dealing with the consequences of either succeeding in these jobs or not. At one point they even run into a standoff with rebels, (one of which is played by Warwick Davis, the actor who once starred in Howard’s movie Willow.) There are lots of double crosses in the second half to the point where nobody can really trust anyone else. But that’s okay. We kind of get used to it.

Somewhere during this time, we also meet Lando Carrisian, (played by Donald Glover.) He’s a gambler who Han plays cards (or this galaxy’s form of cards,) with, and they play for ownership of the Millennium Falcon. Speaking of that ship, the scene that all Star Wars nerds know should be in this movie, if they’re going to do things right, is the Kessle Run. It’s the accomplishment of Solo’s that we keep hearing about in the original three scenes. We keep hearing that the Falcon is the ship that made the Kessle Run in under a seven parcels (the word for second,) or something like that. Well, the good news is this movie does show us the Kessle Run. The bad news is, it’s not exciting or memorable at all. So much so that at the end of it, Solo has to announce to a stranger, “hey, I just did the Kessle Run in under seven seconds,” just so we know that this is what just happened. It’s a terrible disappointment, considering that this was the scene that those who were in the know were most excited about.

Solo works on some levels and doesn’t on others. It is definitely a forgettable film. There’s nothing special about this movie and nothing to make it stand out from any of the others, (other than being about how Han met Chewey.) The action isn’t great, and the story isn’t either. What does work are the fun reference to other Star Wars movies and history. And this movie has a lot of them.  The look of the film, including all of the creatures, drones, and designs, is pretty good too. But the story is a little too basic, and the tons of double crosses don’t exactly propel it into anything creative or original. This movie doesn’t really excel in any area. And maybe that’s something that would have been different if Phil Lord and Chris Miller had been kept on as directors. At the very least, the movie would have been extremely funny.  Now it’s just an okay Star Wars movie with some action scenes that are fun and others that are pretty forgettable.