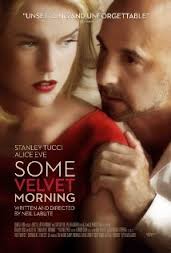 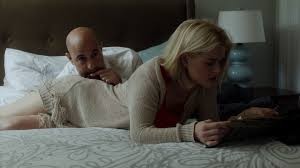 An okay movie, this one is certainly interesting, but it’s also somewhat disturbing, unpleasant, and not easy to handle.

This is a movie about two characters spending a morning together. On the surface, it shouldn’t work at all. But then again, neither should Before Sunrise, or any of the movies in that trilogy, and yet all of them do. Those movies were also about two characters spending a small amount of time together. But while those were romances, this one is a drama that is meant to be disturbing. It’s about a man who shows up at the apartment of a woman he used to have an affair with, and now, basically, refuses to leave. The way more and more comes out about who these characters are, and what their real situation is, comes out, is pretty cool, but something doesn’t quite work. Not until the ending, anyway. This movie has a fantastic twist finalie, but in many ways it’s just not enough.

Some Velvet Morning is another unusual movie about the sexes from director Neil Labute. I say unusual because this guy doesn’t make movies about relatable people or regular relationships. He doesn’t even make movies about dysfunctional relationships. His movies are about people who are straight up out to use each other for their own personal gain, and also for the purpose of actually hurting the other one.
Labute got his start as a playwright, but then he entered the world of movie directing with the film In The Company of Men. This was a movie about two guys intentionally dating a woman with the purpose of destroying her conception of romance and love. From there he made Your Friends and Neighbors, about a terrible group of guys and the wives who loved them (or didn’t.) His final film in the unofficial battle of the sexes trilogy was The Shape of Things. This time it was the woman pulling all the strings to orchestrate an experiment by using a man as an unknowing test subject / victim.
Well, now Labute is back. Some Velvet Morning is the first movie he has made in this genre in over a decade. It’s also his most ambitious. Unfortunately that doesn’t always translate to a great film. Taking a huge risk doesn’t always pay off, and this movie is a perfect example of that. Nebraska by Alexander Payne would be another one. And like that film, Some Velvet Morning is the most low budget in the director’s career, has the simplest storyline, and has one truly great feature… it’s ending.
The movie is about a man named Fred (Stanley Tucci,) who shows up at the front door of Velvet, (Alice Eve,) a beautiful blonde who is younger in age than him, by decades. Velvet is not especially happy to see him, and she even takes a moment of considering her options before letting him in. When she does, her first question is about what Fred is doing there. Especially with a bunch of luggage in his hands. She’s hoping he’s just stopping by on his way to the airport and has some time to kill before a flight. Unfortunately she’s wrong. He’s thinking about moving in.

Fred and Velvet have some history together, which comes out through their conversation early on. They used to see each other for an extramarital affair, but then things got too intense and they cut it off. Now it’s been about ten years, and Fred just shows up like this. He gives her a story about how he has left his wife. He expects Velvet to be thrilled, as if she has been waiting for this moment for years. Instead, it seems like Fred was the last thing on her mind until he surprised her this morning. She lets him know that she has plans for the day and that she has to go out soon.
The two of them go out into the backyard to get a change of scenery. When there is discussion about why Velvet isn’t sitting next to him, and Fred moves over just a tiny bit, forcing her to squeeze in beside him, it is director Labute using those playwriting skills. Have the character convey things through their actions and use of space. Fred is controlling everything there, including where Velvet has to sit. He does this by letting signs of his temper show. Fred is angry that Velvet keeps looking at her watch. He feels like she is rushing him. We get to realize, right then and there, that even though it is her place, and he is the unwelcome visitor, Fred is still the one with all of the power.

Through their conversation, we learn about Fred’s son, Chris. This young computer expert is the reason why Fred and Velvet met to begin with. She was his sons friend, and one day Chris invited her over to a barbecue. That’s when Fred met her. That’s when Velvet slipped a note in his pocket, saying they should meet up in the city for lunch sometime. We learn that at present day, Chris is now married. Yet he still sees Velvet, as friends.

As the movie goes on, we learn a little more about Velvet and how she makes her money. Velvet is a high end call girl. This is how she put herself through college. There are some questions that are raised by this, such as how long has she been doing it, does Chris know about it, and does Fred pay her when he comes to see her. The only one of these that gets somewhat of an answer is the question about Fred. He buys her things. Even for the past decade, when he wasn’t seeing her, he still sent her things in the mail. We learn of how the two of them were good together for a while, but then Fred became too possessive, leaving her hundreds of messages a day. He always wanting to know where she was, who she was with, and what she was doing. For Velvet, this was just too much, and so she called it off.
Like any good movie, more angles and realizations about who these characters are find that they are doing, come out as the movie goes on. In this case, one of those big reveals comes towards the middle of the movie when Fred finds out who Velvet is going out to meet. This changes things for a moment or too, with Fred telling her that she broke the spell. Only she didn’t. In fact, she made it worse and fueled the fire.
Things build to some pretty intense moments toward the end. First, it’s him smashing something that was on the mantle. Then, it’s the discussion about and exchange of one kiss. Only that turns into so much more. There’s a hell of s disturbing climax, followed by one of those game changing twists that makes you want to watch the whole movie again.
It’s one of those Sixth Sense / Shutter Island kind of twists where everything that came before it now has new meaning. The movie is just okay, but the twist is fantastic! As an experimental, two character movie, it’s kind of cool. The dialogue certainly helps to unfold a lot about the characters as new information about how they met and what things were like between them in the past comes to life. The problem with the twist is that, while it is certainly interesting, it quite possibly negates everything that came before it. Then again, people said that about the Usual Suspects twist, and look how good that movie was. The truth is, without the twist, this movie would just be okay at best. With it, the movie is just slightly better than that.