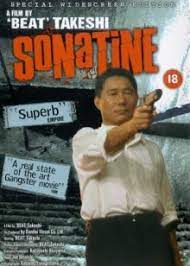 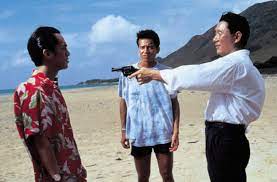 An interesting premise that falls way short of the mark and becomes quite the boring and uneventful film.

Sonatine is a strange movie. It’s mostly a film about gangsters just hanging out. quentin tarantino loves this movie, and for a while i was trying to figure out why. but then, when i put it into those terms, of what it was really about, it made total sense. after all, his Pulp Fiction is in many ways the same thing. gangsters doing things away from the gangster world, and just hanging out.

Only Pulp Fiction had mounds upon mounds of plot. it had not only one story, but three. and they intersected, and each one had it’s own little stories built inside, and it was pretty much the exact opposite of sonatine. i mean, just think of how the butch and marcelus wallace story was about their deal gone bad, but then it also became about the dungeon in the basement of a thrift store and how they handled that situation.

before i get away from sonatine completely and make this review any more about pulp fiction, which i consider the third greatest movie of all time, let’s get back to why sonatine is not very good at all. the premise basically goes nowhere. at the start of the movie, a gangster in tokyo is thinking about retiring and his boss sends him off to settle an issue between two rival gangs in okinawa. and the gangster starts thinking he has been sent off so that the boss can have him whacked.

it’s kind of like goodfellas, with henry hill being asked to go down to florida to do a job, and his voice over freezing the frame and saying, “that’s when i knew if i went down to florida, i would never come back.” so this one part from goodfellas is basically made into an entire movie with sonatine. is it enough for a whole film? Absolutely not.

When he gets down to okinawa, he is greeted by members of the gang that is close with his boss and they put him up and show him and his buddies around. when they go to a restaurant one night, they are shot at. and so they decide that they need to lay low for a while.

that’s where the movie starts to get incredibly dull. they move to a place on the beach and spend pretty much the rest of the movie there, doing nothing at all. these guys are so bored that they play the same prank on each other over and over again. they dig a hole and then cover it with something and watch as their friends walk over to them, step on the hole, and fall in. it was funny the first time. not the third.

a solid chunk of the movie takes place at this beach house with the gangsters really not doing much of anything at all. the main character, aneki, walks the beach one evening and sees a woman being raped by a man. the man stops to confront him and aneki kills him. but even this isn’t entirely clear as we never see who is holding the gun, and aneki later tells his friends that the woman killed him. and the whole thing about walking the beach and seeing a woman being raped and interfering, that’s right out of the firm, with the way tom cruise got setup. maybe it should have been a setup here too. that certainly would have made the movie more interesting.

really anything would have made this film more interesting. any twist or move of creativity. as the film goes on, the gangsters are basically just sitting around bored, waiting for something to happen. if they’re bored, then how the hell are we supposed to feel watching them?

and finally something does happen. a fisherman shows up out of nowhere and starts shooting people. clearly he’s an assassin disguised as a fisherman, but the action is so quick and unclear that it’s not half as exciting as it should be. for example, why does the fisherman shoot some of the characters and then let others live? and why don’t those others that he let live go after him, as soon as he turns his back?

in the end, aneki does start taking action and making things happen, but at that point it’s too little too late. we just spent most of the movie watching a bunch of guys sitting around on the beach waiting for some excitement. when it finally gets there, we’re exhausted from all of the waiting. and the thing is, the excitement that comes at the end really isn’t all that great. half the time, it happens off screen and we don’t even see it. that might be an artistic touch, but it’s not really fair to the audience. not after all of the waiting this movie put us through. if you’re going to do that to an audience, have them wait for an extended period of time for something to actually happen, then when it finally does happen, you better make it exciting as hell. something that is worth the wait. sonatine does absolutely none of this right. i like the premise, but it is handled very poorly.