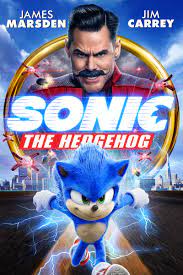 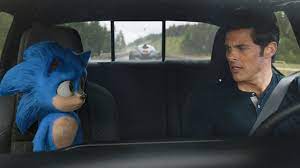 Light-hearted, filled with humor, and some clever ideas from time to time, this movie isn’t anything great, but for a kids movie it’s a good amount of fun.

A fun, fast-witted movie, this one gets most things right, including the look of the character, which evidently was not the easiest thing to pull off. But they heard the criticisms of their character from the trailer, made the right changes, and got some pretty solid results. Sonic is lovable and cute, and the story here definitely gives him a lot to work with. That includes some cool super powers, a bag of magic rings, and two characters who mostly deliver the goods. These would be Tom (James Marsden,) the guy who befriends him, and Doctor Robotnick (Jim Carrey,) the man who comes after him. After a promising first half, the movie does lose some steam when the characters go on a road trip, but luckily that’s just a bump in the road and things pick up again toward the end, to end on a high note. It’s by no means a great movie, but it’s definitely some enjoyable fun.

Sonic the Hedgehog is a movie that does what it needed to do. It entertains. It’s fun. There are some interesting ideas here and a good deal of humor that works. There are also plenty of scenes that are unnecessary and just filler, but that’s ok. Nobody expected this movie to be great or perfect. It’s a kids movie that is also entertaining for adults. Is it the smartest movie in the shed, (like some of those Disney movies that are also great great for both kids and adults?) of course not. But it is definitely enjoyable.

For starters, it’s a movie that really cares about getting things right. This movie put out a trailer and then watched as audiences weighed in and verbalized how much they disliked the appearance of Sonic. He was too scary looking and too human looking, they said. And so the studio decided to do a complete overhaul of the character and change his appearance from every frame he’s in. The new version, and one that appears in the movie is small and cute. They increased the size of his eyes by more than double, and made the white part of his fur pink. They also made his joints and legs and arms shorter as opposed to the lanky, more human-like version that appeared before. The old version of Sonic looked like a kid in a pajama outfit. It definitely was creepy. Especially compared to the new and improved version. And the fact that the studio took the time (and money,) to do this showed so much effort and caring for what audiences thought. Most movies don’t respond to fan reaction like this, and it’s really nice that the creators behind Sonic did.

The result is a lovable, cute character. And he’s just one of the many reasons this movie is good. Aside from him ( voiced by Ben Schwartz, a pretty funny actor,) there’s James Marsden and Jim Carrey as the two leads. Marsden, in particular, is charming. He’s a likeable guy who got his big break from being in the X-Men movies. Before that, Marsden was in forgettable flicks like Disturbing Behavior that got little viewership. But Marsden used the X-Men films to catapult his career into things like Enchanted, and has really honed his own ever since. That’s not to say that he’s a great actor or anything, but just that he is perfect for this part, of the everyday, goofy, nice guy who befriends Sonic.

Marsden works the humor angle here, without overdoing it, and that really means being kind of dopey from time to time. Like our intro to him where he’s sitting in his police car on the side of the road, holding a radar gun, ready to zap cars. Only there are no cars. And so he has to improvise and make up his own fun games of what to zap with the radar, including a turtle. At one point he even hits himself in the jaw with the radar gun. And it’s no wonder that Sonic falls in love with him, watching help ducks cross the street, calling them Donald, Daisy, and Daffy. Sonic watches the Marsden character, Tom, from afar, and is infatuated by him. He calls Tom the Doughnut Lord, because Tom “speaks to doughnuts and eats them if they get out of line.” He calls Tom’s girlfriend, Rachel, the Pretzel Lady because she does Yoga and appears to have no bones. And Sonic watches movies from them, through the window behind them, and feels like he’s a part of their family.

So when things go awry, Sonic hides in Tom’s garage, and that ends up bringing them together. But let’s back track for a moment now. Long before Sonic and Tom meet, the movie opens with Sonic on another planet, speeding through tunnels and around loop-de-loops. It’s the world of the video games, and it’s pretty cool. Here, Sonic has a caregiver’ who is an Owl. She teaches him about rings that can help him escape any situation, and that with great power comes others who will always want to take that power away. Sonic doesn’t believe in keeping his ability a secret, despite the owl warning him to do so. One day he arrives at their home and there are attackers outside who shoot the arrow with a bow and arrow. Sonic throws a ring, opens a portal, and escapes to earth. This opening is cool and exciting, but also leaves us with more questions than answers. Who was the owl? Why did the attackers fire on her, and not on Sonic? What’a neat is that if there’s a sequel (and there will be,) and maybe even another sequel after that, maybe the movie can explore some of the answers to these questions. With more time, maybe they can flesh out some ideas that there just wasn’t enough time to explore here.

We then travel to earth, where Sonic takes us through his interpretation of the planet and the characters in this small town. Aside from the Doughnut Lord and the Pretzel Lady, Sonic also tells us about Crazy Karl, who is the only person that has actually seen him. Sonic likes messing with Carl, running circles around him at night, knowing that nobody will believe him when Carl tells them all about this. Everything seems fine with Sonic here on earth, trying to be a part of Tom’s family without ever having actually met Tom. Only Sonic starts to feel lonely. He watches little league games by hiding under the bleachers, and when the game is long over and nobody is around, he runs around the bases himself, playing all the positions for both teams at the same time. And he wishes there was someone he could give a high-five to, like he saw in the little league game. This makes Sonic angry, and he loses control during his run around the field. He causes a giant spark and electricity wave that takes out all the power in the city. And that makes the authorities call in Doctor Robotnick.

Jim Carrey, playing Robotnick, is pretty great. Carrey has definitely fallen out of the public eye in the past decade or so, and hasn’t really made a good movie in a while, but with Robotnick, he gets to play a cartoonish scum bag, and has a lot of fun doing it. From the moment we meet him, with the giant robot truck that pulls up and stairs that pop out of a ramp, leading him down, we are interested. And the way he confronts the general in charge, played by Neil McDonnagh, is terrific. Robotnick asks who’s in charge and when the General starts to answer, Robotnick cuts him off with a “Wrong,” and then a “No.” This continues until Robotnick asks for the man’s name, and when the General replies, he is met with a “Nobody Cares.”  If it was another actor it might come off as more annoying, but the way Carrey delivers this it is actually pretty funny.

When Tom finds Sonic in his garage and is startled by him, he shoots the creature with a tranquilizer gun. That makes it so that Sonic can’t use his speed and run away. And that’s when Robotnick shows up at the house, following clues. Since Sonic can’t run, and it’s Tom’s fault for shooting him, Sonic asks Tom to hide him. Tom tries, but there’s no fooling Robotnick. And when Robotnick threatens to shoot Tom and does a countdown, Sonic decides to intervene and make his presence known. At that point, Tom punches Robotnick square in the mouth and he and Sonic go on the run. The movie now turns into a chase film. Sonic and Tom have to get to San Francisco because that’s where Sonic’s rings are. When Tom shot Sonic, Sonic dropped the rings and a portal opened up. Sonic said “San Francisco,” in the moment, reading the name of the city off of Tom’s shirt, and so that’s where the rings ended up going.,

So now the movie is a chase – road trip film and only some of it works. Here’s where we get some scenes that are fantastic fun (like when Robotnick finds them on the road and his robot vehicle keeps getting smaller and smaller every time Sonic blows it up,) but also plenty that aren’t. The bar stop in particular feels like total filler as the characters literally try to do a bunch of things that are on Sonic’s “bucket list,” and then Sonic runs around the room altering things while everyone is frozen / moving in slow motion,  – a clear take on the Quicksilver scenes from X-Men Days of a future Past and Apocalypse. There’s even a scene where Robotnick just dances around in his truck, because they think watching Jom Carrey improvise some dopey dance moves is funny. It’s not. But luckily this part of the movie is the only thing that really doesn’t work.

Other than that, the rest of the film is pretty solid. Sure, we still have goofy side-characters like the girlfriends sister (played by one of the friends from the show Insecure,) but they don’t really detract from the story. And we have an ending that amps things up, with Robotnick changing both his outfit and vehicle to strap into a flying machine not unlike a stealth bomber dnd fly through the city trying to blow Sonic away. Plus he has a massive supply of drones helping him out, which he controls through a  panel on the inside of his gloves. It all kind of works. Watching Sonic light up and glow blue when he gets angry works. This is far from a great film, but it is certainly a good desk of fun.