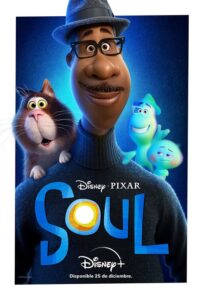 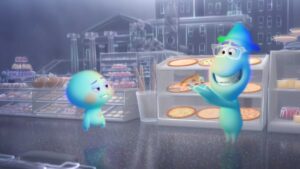 A fantastically clever Pixar movie, this one might be the most adult of them all, and it certainly goes deep with the ideas and revelations about life.

Another very creative and incredibly interesting movie by Pixar, this one tells the story of a man named Joe, who dies, goes to the great beyond, and then finds himself traveling from there to the great before. This man is Joe, and he has just gotten his big break back on earth. Now that he is dead, he will do anything he can think of to get back to his body and his life. That includes impersonating a mentor and then mentoring a young, rebellious character, named 22, who wants nothing to do with life. It’s all pretty out there and that’s what makes this movie so unique. Joe and 22,  end up in different bodies back on earth, trying to find a way to get back into the right bodies, trying to get everything in order before Joe’s big night, and also unintentionally uncovering the meaning of life. Yeah, it’s pretty deep. And the plot definitely has its conveniences from time to time, but overall, this one is pretty clever and fantastic.

Pixar just keeps doing it. Again and again. They keep turning out masterpieces. Now, that’s not to say that they never made a bad movie. From the Finding Nemo films to the Cars films, they have certainly had their misses. And in general, their sequels tend to be forgettable, from Monsters University to The Incredibles 2. But when it comes to original movies with some wildly fresh and creative concepts, they generally knock it out of the park. Especially in the more recent years with movies like Inside Out and Onward as two beaming examples of excellence. These guys know what they’re doing, and they know how to find some very interesting ideas and keep pushing the envelope further. Inside Out explored feelings. The internal of what goes on inside all of us and why. It brought us into a whole other world and a new way of looking at emotions. So did Onward, which was a fantasy film, like an animated version of Lord of the Rings, only more about family and mystery than about battles. And now there’s Soul, a movie about the afterlife, the before life, and exploring what it means to be a human on earth. Basically, this movie covers all of the bases and does a pretty amazing job of hitting every mark.

The movie is about a music teacher named Joe Gardener, who is down on his luck. At least that’s the way he feels about his life. Joe teaches at a middle school, and at the start of the film, he gets promoted to a permanent teaching position at the school. You would think this would be good news, only Joe doesn’t treat it that way. He longs for something more. This is a guy who dreams of being a performer. A star. He doesn’t like teaching music to ungrateful and uninterested kids. He likes playing music. He likes the passion behind it and the electricity one feels while playing their heart out. He doesn’t get what he wants from teaching these kids, who clearly don’t understand him and don’t care about music nearly as much as he would like them to.

And then one day, Joe gets a call. It’s an old student named Curly, who is playing with a well known Jazz singer, Dorothea Williams. And they need a pianist. This is the call Joe has been waiting for. His big break. He runs down the street faster and more excited than a teenage who just won the lottery. And on his way, he is nearly hit by every moving vehicle in sight.

Joe goes to the club, meets Williams, gets the gig, and is told to come back tonight for the show. But when he leaves and runs across the street like a madman again, he ends up falling down a manhole. And dying. That’s right. Joe wakes up as a weird little blue, glowing entity on a sort of escalator moving its way up through space. He turns around, speaks to some other entity’s on the escalator and realizes what’s happening. He’s dead, and he’s being taken up to the great beyond.

Only Joe, having just gotten his big break in life, isn’t having it. He’s not okay with dying right now, and so he runs down the escalator and eventually jumps off of it. And now he travels down, down, down through all kinds of weird black and white levels that take his body and it turn it into white outlines and wires and lines. Eventually he land in a colorful, spiritual-like place called the You-Semeter. This place is actually the great before. It’s the spot where all souls start out before they are sent down to earth and put into bodies.

The You-Semeter scenes are fantastic. This is where the movie gets all other-worldly like Inside Out. We see lots of different rooms, spaces, and pavilions. Like the Personality Pavilion where souls go to get their personality. We learn about the holder souls have to fill up with badges before they can be sent down to earth. There’s also the world of lost souls, who are trapped in a sort of night time desert. And then there’s “The Zone,” where people on earth are in the zone, doing their thing at their peak level. And we meet a bunch of caretakers in this world, called Jerry’s, who are made of white wires that take the form of both animal and people-like beings. Think of them like celestial star creations in outer space. Just the outlines of these forms.

The Jerry’s mistake Joe for a mentor. After all, the only adults or friends souls in this land are mentors. And so one the Jerry’s sends Joe off to the mentor pavilion where he is to be paired off with a new soul he has to help out along the way. And that new soul is named 22, (voiced by Tina Fey.) She’s been around here, in the You-Semeter for a long, long time and has no interest in going down to earth. She likes it here, and has been mentored by the best over the years, including Mother Teresa, Carl Jung, and Abraham Lincoln. None of them was able to help her get her final badge. And now she’s Joe’s problem.

Joe tries convincing 22 to give life a try, but it’s nothing the other mentors haven’t tried before. He takes her to a room to look at memories from his own life. This just makes her curious why he wants so badly to get back to it when his life looks so pathetic. Eventually Joe and 22 find a band of hippies riding a ship through the nighttime desert of lost souls while listening to Bob Dyllan music. These guys go around rescuing lost souls by returning them to their lives with a new sense of purpose. They have the ability to open a dimension portal between this lost souls world and earth, and it’s exactly what Joe is looking for.

Only there’s a twist. When Joe jumps down to where his body lies in a coma, on a hospital bed, there’s a cat lying at his feet. And Joe accidentally takes 22 down with him. Well, Joe lands in the body of the cat and 22 lands in the body of Joe. So now we’ve got a Freaky Friday like situation. Consider this the second act of the movie, The first act was all the different worlds Joe traveled through, including both the great beyond and the great before. This second act is where most of the movie will take place. He and 22 need to find a way to get him back into his own body. Luckily they remember that the guy who found Joe in the land of lost souls is actually connected to a body here on earth, and exactly what location that body can be found in (a street corner, where he is twirling a sign around to advertise a store.) This character is Moonwind, and he has some information that can help them. At exactly 6:00, if they come back here, he will be able to help them change bodies.

The story with Moonwind seems a little too convenient (although the idea that he is mindlessly twirling a sign while his conciousness is mostly in another place is pretty funny.) But what it does is it sets our story on three different paths. There’s the story of Joe and 22 trying to get everything ready for Joe’s big night (the suit, the haircut,) and then making it back to Moonwind by 6:00, there’s the story of the big night itself, and everything the human, Joe has going for him with playing alongside Dorthea Williams. And then there’s the story of this antagonist, a spirit from the great beyond named Terry, who is chasing after them. When Terry figured out there was a soul missing from the great beyond, he went to the great before and spoke to the Jerry’s. This might be a little much, but the difference between the names Jerry and Terry could be that Terry’s are rigid, right angle characters (T for Terry,) and Jerry’s are loose, laid back, and easy going characters (J for Jerry or jelly – fluid.)

A lot that happens in the second half of the movie is a direct result of mishaps caused by Joe and 22. For example, he only needs to get a haircut because he has a mishap with a razor. And he only needs to get his suit repaired because he splits it when he bends down. In other words, if not for these mishaps, the characters wouldn’t have much to do between the time they first found Moonwind, and the time they had to come back to him. But the movie has fun with it’s ideas and keeps the energy flowing at all times, including funny observational scenes about what it would be like to be in a human body for the first time (unable to walk easily, unable to press an elevator button and get your finger to match where you are pointing it perfectly.) By the end of the movie we go from these simple observations into some pretty deep territory, with Dorothea telling Joe a story about a fish that makes him rethink his whole life. The end certainly builds to a climax with both Joe and 22 finding themselves in positions they would have never expected. And the realizations here are pretty great. Sure, the movie has its flaws (the Moonwind conveniences to the plot,) but for the most part, it’s pretty creative and a whole lot of fun.