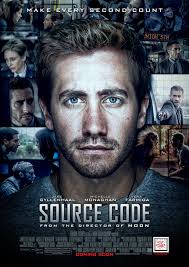 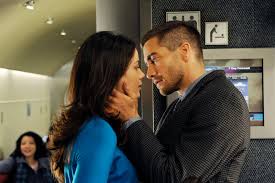 It’s Groundhog Day meets Twelve Monkeys, only as it goes on it loses the energy of both those movies and starts to miss some major beats.

Source Code is a movie that starts off with an interesting premise. Captain Coulter Stevens (Jake Gylenhaal) is sent back in time to relive the last eight minutes of a train ride leading up to when it explodes. his mission is to find the bomber. he is sent back again and again, each time reliving the same eight minutes and each time looking for more clues. It gets very close to groundhog day material when the same little things start happening every time such as a woman spilling her soda onto Stevens’ shoe, or a man asking the conductor if the train is going to make up the time. but this is taking the groundhog day situation a step further, because here it is being used for a mystery. the characters on the train are all suspects. In that sense, it’s also like a murder on the orient express kind of situation where one of the people on the train is the killer, and it’s the detective’s job to figure out who it is.

This movie really plays like groundhog day and twelve monkeys combined with not only the repetition of those eight minutes, but then with Stevens getting transported back into the future where he reports to a board (or in this case a single operator, played by Vera Farmiga), about his findings. In twelve monkeys, the main character played by Bruce Willis was also sent back into the past from a transportation center in the future to find out about something that happened. in that case it was to find out how a virus got leaked. in this case it’s to find the bomb and the bomber.

The way the initial reveal of the plot is handled is very strong. Stevens is on the train, waking up with his head against the window, talking to the woman who sits across from him (Michelle Moynihan). He doesn’t know why she keeps calling him this name, and tells her it’s not him, but she just thinks he’s joking around. then he leans back for a moment and catches a faint glimpse of his reflection in the window. it doesn’t look right. he runs to the bathroom where he locks himself in and looks in the mirror. it’s not him! He’s looking at somebody else. This is how the movie reveals what is going on to both Stevens and to us. It’s pretty cool because it puts us right into his shoes, giving us a scenario of “what if you woke up on a train and when you went to the bathroom and looked in the mirror, you were looking at somebody else?” It’s a wild idea and the movie helps the audience relate to it with the way the situation is presented.

Meanwhile, Stevens not only has the find the bomber in eight minutes task, but also one of his own. As the movie goes on, he starts to develop a connection with Moynahan, and then to fall for her. and it quickly becomes about how he can win her over in just eight, knowing that each time he tries, he has to start from scratch again. There’s a little bit of 50 first dates in there, but I like the way it adds an extra dimension to the plot so that it is not solely about finding the bomber.

a trademark of well-made movies is that as the film goes on, the tension builds and the situations get more and more exciting. To that effect, this movie handles the way Stevens interacts with the customers correctly. he gets more and more violent and physical with them as the film goes on. first wrestling back packs out of people’s hands on the train, but then later taking it off the train and onto the platform. here he finds himself literally fighting with a man, the two of them trying to tackle each other, all over a telephone.

The movie also begins to get into coulter Stevens’ past. That’s important. Everybody has a back-story, and this movie makes whatever happened to Stevens that led up to him being a part of this program a major plot Point. He was a helicopter pilot in Afghanistan and then suddenly he woke up here. he doesn’t remember what happened in between, but he does remember having a conflict with his father where the two of them said some angry words to each other and left things unresolved.

This movie doesn’t just make the bomber the villain, but also to a certain extent the company that is sending Stevens out on these missions. Farmiga might be the operator that he talks to the most, but it is Jeffrey Wright who sits there in the background running the show. he’s the inventor of source code, this time travel device, and he won’t allow Gylenhaal any of the things the man is asking for until his mission has been complete. But there’s no guarantee that he will honor his word, even after Stevens has done what he was supposed to. This whole big company / government agency corruption situation is a little bit of a cliché, from movies like escape from New York or total recall. it’s always the one man against the world, out on his own, situation.

As the movie goes on, it becomes very apparent that there will be twists involved. they (the filmmakers) are definitely keeping things from us, and so we start to guess what these things might be. who might the bomber be? and we think of the craziest Possibilities, kind of like we did for shutter island. what if the main character….what if it’s the girl sitting across from him? We also guess about coulter Steven’s past. What’s he gonna find out about himself when he types his name into Google. I’m sad to say, none of these twists are as great as anything we might have come up with ourselves. yes, the twists are there, but either they are obvious or they are just not creative enough.

Duncan Jones directed the movie. it’s his follow up film to moon, and incredible breakthrough movie. That film starred Sam Rockwell in a sort of tom hanks- cast away or will Smith – I am legend role. he’s all by himself on the moon. Him and a robot voiced by Kevin Spacey. and strange things start to happen. That movie handles its twists correctly, because we don’t really see them coming or have any idea where the movie might go. this one doesn’t. It has a lot going for it, but its twists could have certainly been stronger.

The movie as a whole is pretty good, but lacking in a number of important areas. it has a great initial premise, but at about the halfway Point that premise starts to gets tiresome. the mystery is still there and there are certainly twists that lay up ahead, but the big payoff isn’t as great as it should be. and a major revelation involving the initial mission and what can be accomplished is never even considered, but only put down. The board tells Stevens that he can’t do something, but has it ever even been tried? Because they assume it can’t be done and make it seem like it would be impossible, when like Stevens, that’s the first thing we would think to do. so, there are a lot of little factors here that don’t quite work. the premise is great, but it’s not enough to last through the whole film.