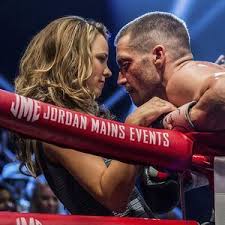 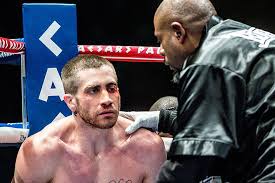 A pretty compelling and powerful film, this one is about so much more than boxing, and is really the story of a down and out, broken man, getting his life back together.

This is an interesting take on the usual boxing movie. It’s more than just a film about a fighter and his fights. This one is about a man who has his life torn apart when he loses his wife to a gunshot wound, and then watches his world crumble down all around him. When his daughter is taken away from him, Billy Hope has to learn to take some responsibility and become a decent human being in order to get her back. It’s Forest Whitaker’s wisdom toting old man who helps him get back on his feet. The movie doesn’t cash in on the appeal of having Billy eventually take on the man who was, in part, responsible for his wife’s death, but in most other areas, this movie works. Jake Gylenhaal is fantastic in the title role, and he gets some pretty good help from Whitaker as well.

Southpaw is a pretty entertaining and powerful movie. It’s actually one of the better boxing movies that’s come out in a while, and that is largely due to Jake Gylenhaal. This guy is really giving it his all in the film and is completely believable as a scummy rebel who has to get his life together. Gylenhaal is an incredibly talented actor who doesn’t always get the credit he deserves. Take his film Nightcrawler, from a few years back, for example. Not only was the movie great, but in it, Gylenhaal played a fantastically menacing character, and yet neither he nor the movie received any love from the oscars. Sure, it wasn’t an epic historical drama, but as a fictional and psychological piece, it was fantastic. With Southpaw, Gylenhaal shows that the skill he demonstrated in Nightcrawler was not a one time thing.

The movie features some very good boxing scenes, but that is hardly the appeal of this film. After all, we’ve been getting great boxing scenes since Raging Bull. The biggest boxing movie franchise of all time, Rocky, is still turning out entries, most recently with the movie Creed, out the same year as Southpaw. What makes Southpaw really work is the emotional angle. That means the story about Billy Hope (Gylenhaal) losing his wife to a fatal gunshot wound and then losing his daughter to social services for being an unfit parent.

It all starts with Hope on top of his game as a boxer. He’s got 50 Cent as his promoter and a highly regarded trainer (although that point isn’t really made clear until after he is no longer working with Hope.) The boxing scenes at the start of the film are nothing special. There’s an interesting match where Hope sort of sucker punches his opponent the moment the opponent gets up off the mat, but nothing is made of that, and the movie just keeps moving on. There is one fighter who tries to challenge Billy over and over again, only to get rejected every time.

One day Billy holds a press conference in a hotel, and this other fighter, Miguel Escobar, enters the room and starts shouting at Billy. When Billy leaves the conference and walks into the lobby of the hotel, Escobar is there again, and again he shouts things at Billy. When he makes leud comments about Billy’s wife, it becomes too much. Billy turns around, ready to fight this man. His wife, Maureen (Rachel McAdams,) tries to stop him, but he doesn’t listen to her. That’s when one of the members of Escobar’s entourage pulls out a gun and opens fire. Maureen finds herself shot, although the movie never tells us if the shooter meant to hit her or was just firing into the air. Either way, Maureen dies in Billy’s arms before the ambulance can even get there.

It’s a hell of a conflict and it leads to Billy really losing it. There’s a great scene of him down on his knees at the foot of his bed, screaming into the mattress. This man is in pain, and he allows himself to fall apart. First, it starts with a fight. Before Maureen’s death, Billy was on the top of his game. He had just signed a huge three fight deal with a television network, and now, after the death of his wife, he takes his first fight. Billy basically allows himself to get hit, not really fighting back at all. Maybe he wants to feel the pain or maybe he doesn’t have the will or energy or motivation to fight. When the referee tries to call the fight, Billy head butts the ref and sends him to the floor.

This costs Billy. He gets himself banned from boxing for a year. He also not only loses that deal with the television network, but ends up being sued by them for breach of contract. Billy starts drinking a lot, and one night he is driving drunk and slams his car right into a tree. Billy gets out of the car, tries to walk a little, makes it inside the house, and passes out, bloody from the accident. The police are called and they find a gun in Billy’s possession, not to mention that he was drunk driving. This is what leads to his child being taken away from him.

Billy decides to start training again. By this point he has lost both his promoter, (50 Cent,) and also his trainer. He goes to the gym of a man who used to train professionals and who he respects. This is Tick Willis, played by Forest Whitaker. It’s his gym. Billy wants a job there, working with kids to train them in boxing. It’s not the kind of job that Willis is offerring. Not yet, anyway. First, Billy has to prove himself by taking the dirty jobs that nobody wants… clearning the toilets. Willis also sets some rules about no cursing or drinking while Billy is working there. At first Billy takes the toilet cleaning as an insult and walks out, but if social services is going to let him see his kid and prove himself to be a fit parent, he needs to show that he has a job, and that brings him right back to Willis’ gym.

Billy tries to go see his daughter at the home where she is staying, and is caught off guard one day when the social worker comes up to Billy and tells him that his daughter doesn’t want to see him. Another time when he goes to see her, the girl sits down with him, but acts like she wants nothing to do with father. Some of this works, and some of it doesn’t. The actress playing the daughter is fine, but some of the dialogue written for her is pretty terrible. At one point, her friend asks her, “is that your father,” for example. The daughter’s response, “I don’t really know anymore.” Still, a lot of this storyline really does work and is pretty powerful, despite the occasionally lousy dialogue.

There’s a good deal of this that seems pretty routine. We’ve seen plenty of boxing movies and plenty of movies about a character’s rise and fall. We’ve seen movies about kids being taken away from parents, and about people having to get their lives back on track to prove themselves. This movie has just a slight edge over most of those others. Part of it comes from Whitaker, who plays a believable character and not just a socially moral character on a high horse, looking down. He might present himself that way, but at one point, Billy goes searching for the real Willis, and finds him at a bar drinking, proving that he really is just a regular man. This scene starts out about one thing (humanizing Willis,) and ends up about another, (Billy taking responsibilty.)

It’s obvious that the last fight of the movie will be against that boxer who challenged Billy at the start of the film and whose outburst led to Billy’s wife getting shot. What doesn’t work is the fact that none of this gets exploited by the movie. Of course the fight would never get promoted as the fight between the person responsible for the death of the other fighter’s wife, and the fighter, himself, but still, you would think the press would at least make a big thing of it. You would think, maybe at the weighing in press conference, Escobar might say something to stir Billy up, and to sell more tickets. None of this happens. We don’t even get to see that weighing in conference that all boxing matches have. This potential for something bigger is never tapped into at the end. Instead we get another pretty average fight that features one cool thing, a point of view camera shot of a character while he is being punched. For the most part, the movie is pretty good, but it definitely isn’t anything great.