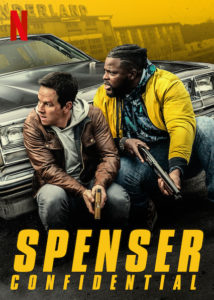 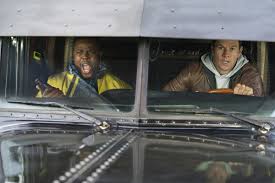 An okay, B level movie that is fun in the moment, but easily forgettable afterwards.

Not an especially smart or original movie, this one still ends up being kind of fun. It’s got a pretty straight forward plot about a Spenser, a guy who gets out of prison for beating up his police captain and the very next day finds that the captain has been murdered. But Spenser’s not the one being framed for it. Another detective is, and Spenser knows something about this isn’t right. So he starts investigating himself, knocking on doors, and collecting clues. It’s entertaining enough until you stop and realize how many of these clues just fell right into his lap, and how unlikely it would be that things would be given to him so simply and clearly. Still, as a B level movie with some fun humor and action, it works.

Spenser Confidential isn’t anything new or special or memorable at all, but it is still kind of fun. First off, this is a character who goes way back to the eighties, and is incredibly nostalgic. Normally, that just means older people knew him from way back when. In the case of Spenser, it also means there’s a reason why this character has lasted so long, and it’s because he’s pretty entertaining. Robert B Parker is the author who wrote the Spenser books about a lone wolf detective battling through the seedy underground of prostitution, druggies, and all kinds of criminal activity. There was a TV show in the eighties, based on the books, called Spenser For Hire. And then Parker continued writing the books, and they had a major following in the nineties.

Today, the character is more nostalgic than anything else, but one has to remember why he has survived this long…he’s a lot of fun. Even by today’s standards. And with the character, there’s enough name brand recognition to get director Peter Berg interested and attached to this made for Netflix movie, and to bring his main leading man along. Mark Wahlberg and Berg have now worked together five times. There was Lone Survivor, Deep Water Horizon, Patriots Day, Mile 22, and now Spenser Confidential. Berg was an actor before he became a director (Cop Land, The Last Seduction,) and as a director, he was very hit and miss. For every Very Bad Things and The Rundown, there was a Battleship or The Kingdom. It wasn’t until he started teaming up with Wahlberg, that Berg as a director kind of came into his own.

Not that all of the Wahlberg – Berg movies are good. In fact, the only one that is especially great is Patriot’s Day. But clearly these two work well together, and they make movies where Berg can be taken seriously. Even Spenser Confidential, light hearted as it is, manages to be a whole lot better than other movies that just try to copy movies which came before them. Not that anything in Spenser Confidential is especially original, but at least it doesn’t feel like a carbon copy of any specific other movie. This one is a fairly straight forward corrupt cops movie. Spenser gets out of prison for beating up his commanding officer, who he thought was trying to cover up a murder investigation, and then the very next day, that commanding officer is murdered. Now the usual movie would have Spenser be the one framed for the murder, and have him spend the whole movie trying to prove his innocence. That’s something that goes back to movies like North By Northwest or The Fugitive. But Spenser Confidential has other plans.

It turns out, a cop named Terrence, who was working with Captain Boylan, (the commanding officer,) was found dead in his car the morning that Boylan was found killed. Apparently Terrence shot himself, and was a drug dealer. A whole bunch of drugs were recovered from his house when then police came to investigate. So Terrence is being accused of killing the Captain. it seems like a case closed situation. After Terrence killed Boylan, he drove home, sat in his car, and apprarently took his own life. Only Spenser doesn’t see it that way. He wants to get involved. He knew Terrence and knew Terrence was a good cop who would never do this, and so Spenser makes it his business to investigate. Corny as that all sounds, it’s still kind of fun. And for comedic purposes we are introduced to two character who Spenser lives with and partners up with.

There’s Henry (the great Alan Arkin,) who is the long time friend of Spenser that comes to the prison to pick him up when Spenser is released. Henry gives Spenser a place to stay, making a room for him in his home. How exactly these guys know each other and what their relationship has been over the years is never quite explained, but you pretty much get the picture that they go back some ways. And then there’s the guy who is living with Henry, Hawk (played by Winston Duke, coming off the success he’s had with Black Panther and Us.) This guy is clearly an ex con, just like Spenser, who is living there just for room and board, as part of a program. He ends up becoming Spenser’s roommate, with their beds right next to each other. And the movie has some comedic fun with that concept. This is our third big movie featuring Duke, and yet it’s the first time where he is really referred to over and over again as “a giant,” and is filmed in a way that makes him look like a hulking, menacing presence. It adds to the character and the humor.

In fact, the movie goes for comedy quite a bit, and most of the time it just gets in the way of the story. For example, the opening fight in the prison is pretty pointless other than to show us that Spenser is a badass who can hold his own. Adding in a great song from the band Boston definitely helps, but it still doesn’t make the scene very relevant to the story. That’s okay, though, because it’s just the opening, so we can afford a little bit of setup. But when this kind of thing continues, it feels like an interference. For example, the relationship with Spenser’s ex-girlfiend, Cissy, is more stupid than it is funny. This woman is extreme and high maintenance, and Spenser is always trying to hide from her. Eventually they do meet up in a boxing ring, where she tells him off. And then they run into each other again at a restaurant, and sparks fly between them in the mens room. Let’s just say it’s a good thing there are locks on the doors. But this is amateur comedy, with everyone in the restaurant being able to hear them from in the bathroom. And it adds nothing to the story.

Maybe that’s because the story doesn’t have a whole lot of places to go. The clues and ways that Spenser puts this whole thing together are way too simple. He goes to the scene of the murder and scopes it out, looking at exactly where the shooter must have been standing when he took a shot that blew out the back window of a school bus. It’s here at the bus yard, while walking in and around the taped off area, (and noting the blood still on the pavement from Boylan,) that Spenser notices something on the ground. And that leads him to find out that someone he knows, who is always chewing on a toothpick, was there at the scene of the crime. Not to worry though, because this guy is a detective and was probably just there to investigate after that fact… or was he?

Some of the clues, like that one, are pretty silly. First off, a toothpick can come from anywhere or anyone. Secondly, if you’re committing a crime, you’re probably not going to be chewing on a toothpick, let alone allow one to slip out of your mouth. Especially if you know about DNA, which this guy certainly does. But at least the movie doesn’t have Spenser jump to conclusions. Instead of assuming this guy was there the night of the murder, Spenser simply thinks the guy, (Driscoli, played by Bokeem Woodbine, who goes back with Wahlberg to the 90s ridiculous hitman comedy The Big Hit,) was there at the scene investigating, and nothing more. And while he’s asking about that, Spenser is trying to figure out the answer to other questions he’s got, like how Terrence was able to drive himself home if the airbags were disabled after he ran his car into Boylan’s. All the while, it you watch closely, certain characters clearly have an agenda and are tying to push Spenser into leaving town, in a friendly kind of way, (like pretending they are jealous, or just giving him friendly advice.)

There aren’t really a whole lot of clues that push this thing along. And that’s part of the problem. There’s the toothpick. There’s the air bags question. And then there’s a recording that comes across Spenser’s way and literally drops everything in his lap, point blank. All of a sudden, everything is revealed. It’s like being told the answer to a riddle before you finished solving it. And yet somehow it manages to work here, probably because the movie has still another agenda left to go. It isn’t just about solving the mystery. Now Spenser has to get a meeting with these bad guys. And to do that, he needs to have something they want. Which means he has to find where their drug shipment will be and steal the drugs. This all becomes pretty entertaining. Especially as it narrows in on an ending that takes our characters out to a deserted location for it’s climax.

As a mystery, Spenser Confidential only kind of works. Some clues and ways that Spenser comes about them work far better than others. For example, at one point Spenser goes to prison to question the guy who orchestrated the plan to beat him up at the start of the film, and ask him questions. And this guy tells him about the pet project of the corrupt cops, drug dealers, and the Trinidadio gang… Wonderland. Turning the old dog racing track into a casino. But here’s the problem… how would this guy in prison ever know anything? What does he have to do with any of this? It’s almost as bad as the recording falling into Spenser’s lap, (at least in that situation the widow had a reason to call Spenser over, after her place was ransacked.) But for every one of those, there are other angles and clues that do work, such as the airbags, and the toothpick (okay, maybe that one’s not so bad after all.) The action here is okay. Sometimes it feels forced, like when the Trinidadios come into a fast food restaurant where Spenser is eating and attack him. But it’s either that, or just not getting much action at all, so going with more action, even when it’s not completely necessary, seems like the right move. This movie isn’t especially memorable or great, but it’s still fairly entertaining and fun.