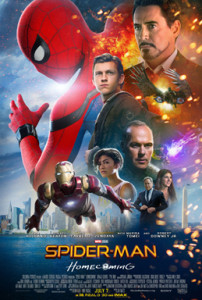 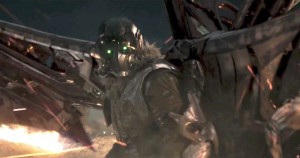 A great comedic movie, with tons of cool ties to the Avengers, this one works in nearly every way.

This is it! Finally. This is the smartest and the best Spider Man movie yet. It’s about time. The first Andrew Garfield movie wasn’t bad, but this one blows that and every other incarnation and version of the character away. First of all, it gets the high school tone and atmosphere just right. And that leads to some fantastic situations filled with great humor. Secondly, there are tons of connections to the Marvel world and to the Avengers. I guess that’s bound to happen when Tony Stark is a major character in the film, but that’s another huge get for this movie. Stark, as well as nearly every other character, really adds to the film. And the movie is smart enough to make the main characters a bunch of kids. Then there’s the villain, played by Michael Keaton, who is not only menacing, but also has a fresh take on how to make a villain believable. Keaton has been around superhero movies enough to have his own ideas on how to do this right, and he most certainly does. The action in the movie is fine, but it’s the stories and characters that really make this thing worthwhile. There are some great plot twists and quite a lot of humor to really make this a fun experience.

Spider Man Homecoming is the best Spider Man movie yet. It’s the film that finally gets so many things right that previous movies about this character just never seemed to be able to get a handle on. First and foremost, it tells a high school story. Throughout the making of this film, rumors were constantly flying (mostly from the mouth’s of the people making the movie,) that this was going to be like a John Hughes movie. It is. It’s about being a kid in high school. That means gym class, detention, going to the principal’s office, the cafeteria, field trips, after school teams, house parties, homecoming, and more. This movie nails the high school spirit, and that goes a long way.

The reasons why this movie is so good are not what one might expect. It’s not the action. The action is just okay. In fact the climactic action scene is actually one of the weaker moments in the film. But what works about this movie is the story. There are real twists and turns. There are best friends and bullies that feel real. And this movie gets the villain down perfectly. Michael Keaton as the Vulture is fantastic. He’s a three dimensional character, who doesn’t want to kill Peter Parker. Unlike every other villain in superhero history who wants the hero dead, with this guy, his motivation is much more complicated and character-driven than that.

The movie opens with the aftermath of the Avengers Vs Chitari battle in New York (the first Avengers movie.) Michael Keaton’s character, Adrian Tomes runs a demolition cleanup company. They are collecting the alien weapons left in the rubble, among other things. That’s when a woman comes in and tells Tomes that his company is being replaced and taken off the job. It is Tony Stark’s personal crew that is coming in to replace them. Tomes doesn’t leave quietly. He gets in a fist fight with a guy who challenges him for “spreading himself too thin.” But the discussions about Tomes being replaced by Stark don’t stop there. The conversations continue and the anger boils up. At one point, one of Tomes men refers to Stark when he comments, “so he and his friends make the mess, and then he also gets to be in charge of cleaning it up?”

These kinds of observations and ideas are pretty smart. It’s a fantastic way to connect Spider Man to the Marvel movies by having the villains starting out with the aftermath of an Avengers event. And the collection of alien weapons and technology nicely explains how these villains get their powers. All of this is just the opening scene. From there, we travel back with Spider Man by way of hand-held documentary video to see all the events of his working with Tony Stark, after Stark came to his apartment in the movie Captain America Civil War. We see Peter Parker arrive in Germany, be given his new suit by Stark, and even fight in that battle against all the heroes in that movie. This is another fantastic way to connect this character and this film with the rest of the Marvel cinematic universe. It shows us things we’ve already seen from another point of view, and also fills in the gaps of things we never did get to see, but were wondering about. Also, it’s all very funny.

In fact, the humor happens to be one of the best things about this movie.. A major reason why this film has edge over the Sam Raimi / Tobey Maguire Spider Man movies is because in those films the jokes were corny and dopey. In this one, they hit the nail on the head nearly every time. These jokes are actually pretty clever and smart. Getting back to the high school feel of the film, we meet Parker’s teachers, and even they are funny. This movie really lined up a hell of a cast, and we’re talking about the small roles. Hanibal Buress is the gym teacher, (he has a couple of great scenes, but one amazing line, when referring to a PSA by Captain America, Buress says, “I’m pretty sure this guy is a war criminal now, but anyway…) There’s also Martin Starr (from Silicon Valley,) as the debate club teacher. And then Donald Glover as a buyer of weapons who is more vigilante than either hero or villain.

The main characters here are the kids. There are five of them. We have the two guy friends, Parker and Ned. Then there’s Liz, the girl Parker is crushing on, and Michelle, the dark and disturbed girl who sits in the corner making sly comments. Liz goes to detention even when she doesn’t have detention, just to draw people who are in distress. And aside from those two guys and two girls, there’s also Flash, the bully. For the first time ever, a Spider Man movie has found a way to get Flash right. He’s not a buff idiotic jock, but just a little weasel of a kid who gets his pleasure by getting others to make fun of Parker. When I say a movie finally gets him right, to be fair, in the comics the character was indeed a two-dimensional dumb jock. But those comics were also written in the sixties. This is the Flash for today’s generation.

Of those kids, the only one who doesn’t quite work is Liz. It’s simply a matter of unrealistic circumstances. This is supposed to be the most attractive girl in the school, and yet she doesn’t have a date for homecoming. Really. She would in actuality have a boyfriend who was a tough guy, and super cool, but also a total jerk. And then Parker continues to stand Liz up or disappear on her and let her down, and Liz just keeps on forgiving him. I could understand if the reason why she kept forgiving him was because she was intrigued and found Parker to be mysterious, and wanted to know more, but the movie never makes those points. Liz is the weakest character in the movie, but considering they got four out of the five kids exactly right, they definitely came out ahead with that one.

Tony Stark is also a major part of this movie. He’s Parker’s mentor. Tony puts his driver / head of security, Happy Hogan (John Favreau,) in charge of watching after Parker, and the movie has lots of fun with that idea. Hogan is endlessly annoyed by this kid and the constant barrage of texts young Parker continues to send him. But when Tony shows up, it’s mostly for guidance. He wants Parker to be a friendly neighborhood Spider Man, not some superhero vigilante who tries to stop hardened criminals and ends up putting other people in danger. At one point Stark puts it plainly to Parker that if the kid dies, than that’s on Tony, and he doesn’t want that on his conscience.

This might not be an origin story in the traditional sense (we have seen two different origin stories of Peter Parker at this point, the first played by Maguire, and the second by Andrew Garfield.) This movie wisely avoids rehashing the Uncle Ben story again, for example. But considering that it is indeed the first solo movie for this incarnation of the character, it needs to be a starting off movie, showing us how he learns about his new Spider suit. The movie has lots of fun with that too, with Tony putting a “training wheels protocol” on the suit to safeguard most of its functions until Parker is ready, and Parker trying to override it and get rid of the tracking device Tony put inside of it. This, like most situations in this movie, leads to some great humor.

With everything going on in this film, between the jokes, the characters, and the connections to other Marvel films, the action is surprisingly not on the list of the most important qualities. Good thing too, because the action in this movie isn’t especially great. The film was directed by John Watts, who made the smart, funny, and kid-driven movie (no pun intended,) Cop Car. Watts is great at capturing the kid mentality, but he is not an action director. With that in mind, he does a fine job here. There are about three major action scenes. Some of them are better than others. The Washington Monument scene is the best of the bunch, because we get to see Spider Man climbing up the monument and searching for a way to get in. But action is not this movies strong suit. Nearly everything else is. That even extends to the villains. The mistake of both Spider Man 3 (the last of Maguire films,) and the Amazing Spider Man 2, (the last of the Andrew Garfield films,) was that they tried too hard to cram extra villains in, to the point where the plot of the movies were sacrificed. Spider Man Homecoming finds ways to get some very subtle hints about villains in without sacrificing a thing. Spoiler prevent me from going any further with this, but the subtle nods to villains here are exactly how this sort of thing should be done. This movie really knocks It out of the park in so many ways. It’s smart, funny, entertaining, and a truly great time.