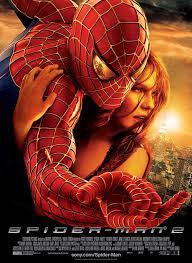 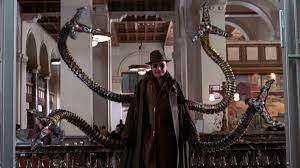 Far superior to the first Sam Raimi Spiderman movie, this one mostly loses the camp in favor of actual drama and suspense, while also giving us a fantastic villain.

If the first Sam Raimi – Tobey Maguire Spider-Man is remembered fondly because it was the first of its kind (the very first big studio Spider-Man movie,) then this sequel is the one that actually figures things out. The first movie was a whole lot of fun, but the tone was too campy and silly more often than it wasn’t. The second movie, on the other hand, is dark and deep in all the right ways. It is loaded up with conflict for Peter Parker and takes a much more serious tone. And sure, there’s still some humor (J Jonah Jameson, as played by JK Simmons is always good for laughs, for example,) but this one knows that audiences are past the campiness of the Joel Schumacher Batman movies (which almost felt like it was carried over into the first Spider-Man movie, only on a much smarter scale.) Here, in the sequel, we get Alfred Molina as Doctor Octopus, and boy does he fit the part. The action is great, the story is great, and even the arcs of the characters feel better here. The first half might not have quite as much action as expected, but other than that, this one is a solid superhero movie.

Spider-Man 2 is the movie that gets it right. While the X-Men films did a pretty good job from the get-go, with both X-Men and X2 being great, the same cannot be said for the Sam Raimi directed Spider-man movies. The first movie in the series was enjoyable, but it was also over-the-top campy as all hell. Between the ridiculous-looking outfit of the villain, The Green Goblin, to the attempts at humor being pumped into nearly every moment, it was an awkward movie to say the least. Now, it wasn’t bad, mainly because if you’re going to do camp, then Sam Raimi is the best the business. But it sure wasn’t up to par either.

Granted the Christopher Nolan Batman movies hadn’t come out yet, and that’s what really changed the landscape for superhero movies and got them all to be more serious, but even still, the difference in tone between Spider-Man and Spider-Man 2 shows how much Raimi grew as a filmmaker in just two years. This is a movie with real drama, real consequences, and a story that is packed full of conflict.

First and foremost is the villain. People look at these kinds of movie and talk about the hero and his inner conflict and all that, as if it’s the biggest thing going on in the story. Only it never is. Not really. The villain is always center-stage. When it’s a lousy villain, or too many villains not handled correctly, it easily sinks the ship. And no amount of inner conflict for the hero can save that. Just look at the second Andrew Garfield movie, The Amazing Spider-Man 2. Garfield was great. There was a ton of conflict (in fact too much,) there, including a forced storyline involving the discovery of hidden secrets about his parents. But the villains were awful, with one being worse than the next, and they brought the whole thing crashing down.

But in Spider-Man 2, Sam Raimi’s sequel, we get the best villain in that entire trilogy… Doctor Octopus, played by Alfred Molina. Let’s start with the fact that Molina actually looks like Dock Ock. Maybe not in the face,  but certainly in the body-type, (which is a lot more than we can say about Topher Grace’s Venom, in the sequel that came after this one.) Aside from that, he plays a sympathetic villain who you can really believe in and get behind.

The idea here is that Dock Ock is madly in love with his wife, Rosie, and is also incredibly passionate about his job and experiments. He works for Oscorp and for Harry Osbourne, (James Franco,) who is now in charge of the company. When his big presentation of new technology and a showcase experiment go horribly wrong, the damage is beyond repair. Not only does the lab go up in flames, but people are killed, including Dock Ock’s wife, Rosie. Octavius is left with nothing. No job. No wife. No money. And on top of that, he’s got these tentacle-like robotic arms who have a mind of their own and are controlling him, now that the inhibitor chip at the back of his spine, has been busted.

The tentacles are like animals with mouths that creep up behind Octavius’ shoulders and bring their heads in close to his. They make noises like animals would, and resemble electric eels. And they look fantastic. Say what you want about the newer Tom Holland Spider-Man movies, and how the action is so much better now that computer effects have advanced, but using practical effects for the arms was definitely the way to go, and boy do they look great.

The storyline here has some similar beats to the first film. Mary Jane is with another boyfriend, which is driving Peter Parker crazy. At least it’s only one this time. In the last movie, she went from Flash Thompson to Harry to Peter (kind of.) Here, she is with John Jameson, the son of J Jonah Jameson, for the entire film. That’s a nice change. And Parker now wants her more than ever, which is a little strange considering she wanted him at the end of the first movie, and he rejected her. But in this movie Parker comes to terms with the idea that if he continues to be Spider-Man, he won’t be happy in life, and so he gives it up, hoping to get Mary Jane now. As he says, “there’s something I thought I had to do…I don’t have to.”

The turning his back on being Spider-Man is actually the result of. a whole bunch of reasons. Nothing is going well for him as Spider-Man. He’s failing his classes at college, where Professor Curt Conners (Dylan Baker, who never got to play the Lizard, after all,) is a little too kind about giving him more chances. He’s also unable to get to Mary Jane’s play, despite her specifically asking him to not let her down. He’s fired from his job as a pizza delivery boy. And there are even problems with Aunt May, unable to keep the house with the finances she owes. Parker can’t even pay the rent at the small, studio apartment where he lives, despite the place being so crappy that everyone on the same floor shares a single bathroom.

There is definitely a whole lot of conflict here, including Harry, who feels betrayed by Parker, since he believes Parker knows Spider-Man’s identity and won’t give it up. Harry also believes that Spider-Man killed his father. But the conflict actually makes the movie feel a little too weighty in the first half. In ends up making this one take a really long time before it gets to the villain, (about thirty minutes,) and then even longer before the villain turns into evil Dock Ock. Once things do get going in the second half, however, the action scenes keep moving. We get some Sam Raimi horror scenes in the first half (his only campiness with this movie,) first with the experiment gone wrong, and then with Octavius arms attacking everyone in the hospital room, like a full on monster movie. And then in the second half, the movie goes all out with action, first with that scene where Parker dodges a car that is thrown at him through a glass window, and then there’s the train sequence, which is nothing short of fantastic

The movie is definitely a little slow from time to time, especially in the first half, but that’s the price you pay for having a more serious movie. This one isn’t about the mile a minute laughs. It isn’t about silliness or corniness. This one is about real conflict with a real villain. And there’s just so much conflict to go around. Parker even has a situation with Aunt May, where he tells her the truck about what happened to his Uncle Ben. And his storyline with Harry continues the drama that was started in the first movie. This time Harry wants Ock  to bring him Spiderman, and the only way to do that is to use Parker as a pawn. It all makes for a lot of excitement. Some people call this the best superhero movie of all time. It isn’t. But it’s certainly the best of the Raimi trilogy, with fantastic action, an exciting villain, and a story that is loaded up with conflict. What an entertaining movie.