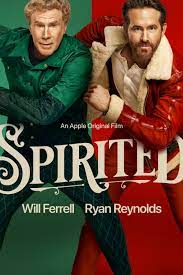 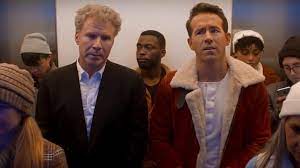 A clever take on the classic story A Christmas Carol, this one is a humorous musical with some very interesting ways of brining the story to life.

It’s Truman Show meets A Christmas Carol, as we not only see the story of the ghosts and the human being haunted, but also behind the scenes where the ghosts work at a company that monitors and prepared for the one night of haunting, all year long. This one is a comedy and a musical, and it works on both levels. As a comedy, the humor is pretty great. Chalk that up to Ryan Reynolds, who punches up any movies he’s in, ever since his Deadpool films. As far as the musical, some songs work better than others, but the movie is always flashy and fun.

Spirited is an extremely unique and creative approach to telling A Christmas Carol, the famous Charles Dickens story that’s been done again and again. There are so many version (even Mickey Mouse and the Muppets each have one,) and yet most of them don’t stray very far from the original story. Only Bill Murray’s film, Scrooged, diverts a good deal, and in terms of originality, Spirited even has that movie beat (although to be clear, Scrooged is the far better movie and comedy, between the two.) Still, Spirited is a lot of fun and delivers all sorts of praise for its fascinating ideas about how to tell this tale.

Those ideas are that the ghosts, or spirits, who haunt a human on Christmas Eve in attempt to get that person to change his or her ways, are part of an organization. There is a whole company with a building underground, that prepares for the night of the haunting all year long. They spend that year picking their subject, researching him, and then building sets that will represent the person’s past, present, and future. It’s a pretty genius idea, in the vein of the Truman Show, another behind the scenes movie, and it could have gone a little further if they showed us more of the preparation. For example, watching the characters viewing clips of the subject’s life, Defending Your Life-style, and discussing which moments to reenact. But this movie is pretty loaded up as it is, so probably wouldn’t have had time for that anyway.

It’s loaded because there is not one, but two main characters, and there are actually three characters who go through significant character arcs. Those would be Clint Briggs (Reynolds,) Christmas Present (Will Ferrell,) and Kimberly, who is Clint’s assistant, (Octavia Spencer.) Clint works for an advertising / media spin company that helps do damage control and public manipulation for high scale clients, like senators. It’s the kind of company that digs up dirt on people and uses it to persuade the public into thinking whatever this company wants them to think. There have been other movies about this sort of person before, whether he’s considered a fixer, like in Michael Clayton, or an advertising man, like in Thank You For Smoking. Here, Clint is a little of both, and he’s definitely not a good human being.

But unlike most Christmas Carol movies, where the subject of the haunting is the only real protagonist, and the three ghosts are all side characters, here the Will Ferrell character, Present, is just as prominent. In fact, the whole opening is all about him, and it takes a while before we even meet Clint. At the start of the movie, we watch the end of the previous years haunt, starting with the Ghost of Christmas Future sending a woman (Rose Byrne,) down into a grave. It’s a moderately spooky scene, and definitely gets the movie started off with some chills, but we quickly learn that the woman is fine, and waking up in her bed. And then we see her, outside her house on a snowy day, a changed person, as she interacts with the neighbors over a street hockey game.

From there, we go into the building (which looks a lot like Santa’s Factory, the way it is represented in movies like The Santa Claus.) We meet the spirits and also the whole team behind them who work around the clock to prepare for this evening. And we get our first song, which has them explain what they do. The sequence ends with present walking around by himself in a hall of statues, until he is confronted by the HR representative who wants to know when he is retiring. Apparently he has been eligible for retirement for two hundred years now.

At this point, the spirits, decision-making team, and their leader, Jacob (Yes, Jacob Marley,) start preparing for the next years haunt. The first step is choosing a subject. They visit a hotel, where the manager seems to be the one they will go with, as he has hundreds of people working for him and is a real jerk to his employees. The goal of the haunting team is to pick a person who will have the most ripple effects on the rest of the world. And that’s when Present comes across Briggs, who is walking through the lobby, talking to a senator on the phone, spinning a story. He follows Briggs to a convention hall where Briggs gets on stage and talks to a room fall of Christmas Tree story owners, angry about how fake trees are stealing their business. Briggs puts together a plan for how to change the perception around the world, so that fake tree owners feel and seem like they are disrespecting Christmas. And of course, there is another loud, flashy song here.

We see more of Brigg’s life now, as his brother and niece come to visit, needing help with a student government campaign she is running. The niece is running for class president, and Briggs gives her advice on how to sabotage the competition, a nice, polite high school boy, who they are about to make look like an awful person. It’s during this sequence that Present first hits it off with Kimberly, who can for some unknown reason see and hear him, while everyone else in the real world, including Briggs, cannot. And we get a song by Spencer, called The View From Up Here, which is one of the better songs in the movie.

Pretty soon the decision to accept Briggs as the subject has begun, and the haunting gets started. It starts with Marley and the second creepy scene in the movie, with him singing and scaring Briggs in a dark living room, Marley flies up into the air and crawls on the ceiling with his chains hanging in the air, and metal boxes attached to the chains floating all around. He looks like a metallic spider, at times, and luckily the movie stops the song twice (and turns the lights on,) to give us humor and take us out of the scary moment. All of this talk of scariness and diffusing it is for kids, of course, because unlike Scrooged, this movie is definitely meant to be suitable for children, so that it works on multiple levels (whereas that great movie is strictly adult humor all the way through.)

There’s a very clever way of how they get rid of the Ghost of Christmas Past and are able to replace her with Present, who ends up doing both spirits’ jobs, so that Will Ferrell gets more screen time. And spending more time with Briggs then ghosts of Christmas Presents in other incarnations of this story would, allows the subject, Briggs to ask more questions and delve deeper into the lives of the spirit. He wants to know all about Present, and what this guy’s story is. And Present ends up telling him (although he does resist at first.) Ptetty soon we’ve got doors opening up in the ground that Briggs runs down to see the behind the scenes company, and we’ve got Present taking Briggs into his own backstory, which has a huge reveal that ties directly into the Christmas Carol story that we know so well. And they even make time for humorous points, like the meaning of “Good Afternoon,” as a song, strictly because it is funny.

This is an incredibly smart movie. Most of the humor works, including the way that sets are just wheeled in by employees, and the way that characters in the reenactments pop like confetti when they are no longer needed. The songs are the thing that make this movie a little bit hit and miss. For the most part they work, but none of them is especially great or memorable (maybe “Good Afternoon,” but that’s about it.) The movie definitely feels long, and all of the songs, which stop the story, don’t help. Still, one has to admire the creative ways that they come up with for tackling this story, and also the great humor involved. Both Reynolds and Ferrell are perfect cast here, and the movie definitely works. A new Christmas Classic.