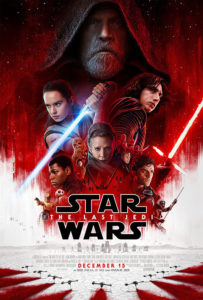 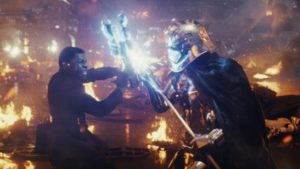 Not as good as the Force Awakens, this one does falter at times, but it also has a lot to offer including Luke Skywalker back in a major way.

Like the prequels, this one often feels like you’re watching a B movie version of Star Wars. The action is fun, but the dialogue is sometimes kind of clunky. And yet it still does have a decent amount to offer. The characters established in the previous film are great, and following the continuation of their missions is kind of fun. Ray in particular, gets the best story, as she uncovers secrets about Luke Skywalker and Kylo Ren, the son of Han Solo and Leia. Unfortunately, she only makes up one third of the stories. Poe and Fin have the other stories and those aren’t nearly as interesting or smart.

Considering that the Star Wars movies of recent times (The Force Awakens and Rogue One,) have both been pretty smart and creative, it’s a shame that The Last Jedi is not better. Especially when you consider where The Force Awakens left off. That movie was fantastic on all levels. It had its haters, due to the story being a little too similar to the original Star Wars film, A New Hope, with a message hidden inside of a droid and all, but every beat, joke, and action sequence was fantastic. The same cannot be said about its follow up film The Last Jedi. The reasons for that start with the director. Ryan Johnson is not nearly as accomplished of a filmmaker as one of these movies should have directing it. Whereas JJ Abrahms was perfect, (he tackled the Star Trek reboot before this, not to mention tons of other Sci-Fi projects going all the way back to the TV show Lost,) Johnson has not done a whole lot. In fact, he’s really only made one big movie. Looper. And it was a cool sci-fi film, but not enough to give him a proven track record.

The Last Jedi pretty much has problems right from the start. The usual scroll of text to fill us in on what’s been going on is fine, but then the first action sequence is pilot Po (Oscar Isaac) flying around in an X-Wing Rocket Ship blasting every giant cannon in sight on a huge enemy space station. The problem is that none of these cannons can shoot anywhere near him. It feels and sounds fantastic for an action scene, and right away you are thrown into a Star Wars movie and get this feeling like there’s nothing else quite like it in the world, but the logic of why this plane can’t be shot down doesn’t exactly add up. They say it’s because the ship is too small for them to hit. It’s not enough of an explanation, and there’s no threat which definitely detracts from the situation.

From there we get some attempted comedy with Po speaking through radio communication with enemy General Hux and pretending that he’s holding on the line, talking to an operator, while Hux is actually barking threats at him. Po keeps saying things like, “still holding for Hux,” as Hux gets infuriatingly red. This is cartoonish humor and it only gets worse when Po starts mentioning Hux’s mother. Really? In a Star Wars movie? But this is the level of humor and intelligence this film has. I like Po as a wiseass from the Force Awakens, (“Who speaks first? You speak first, I speak first?”) but this is just stupid. Luckily, there’s a cool scene involving bomber ships blowing up while dropping bombs and the way one female Asian pilot makes a final stand to accomplish her mission, that follows it.

At this point, we’ve gotten some cool action, but some lousy explanations and lousy humor. It’s time for more lousy humor. First, there’s Finn (John Boyega,) walking around a ship wearing a suit covered in holes that is shooting out water in every direction. Then there’s Ray, on an island with Luke Skywalker, watching him drink bottled milk from the nipples of a strange creature. The decisions this movie makes are pretty baffling. Especially when we watch Luke staring at Ray while drinking the milk, with milk spilling down his beard. But then we start getting into the story, and there’s actually some intelligence there. Finally. Luke doesn’t want to train anymore Jedi. In fact, he’s very down on the Jedi, and thinks its time for the Jedi to come to an end. The reasons for all of this are because he trained Han and Leia’s son, Ben Solo, (Adam Diver,) and then Ben Solo turned on him and became Kylo Ren the Darth Vader looking villain of the new series.

Speaking of Kylo Ren and his Darth Vader look, one thing that was absolutely fantastic about the Force Awakens was the whole appearance of this character. His look was menacing in the same black helmet and outfit way that Darth Vader was in the original films. And the sound of his voice through the helmet was also incredibly cool and spooky. When he took off his helmet, about halfway through the Force Awakens, and stopped wearing it for a while, it was a shame. This movie does worse. It has Kylo Ren take off his helmet very early on (after only about one or two scenes,) and then destroy it, so that he can never wear it again. There goes one of the coolest things about this character. Again, a lousy decision by whoever wrote this thing.

Luke is an angry character in this film, and that actually works for him. He becomes the grump of the movie (in place of Han Solo who died in the last film.) Especially since Luke has some pretty sound reasoning and logic for turning on the Jedi or idea of the Jedi. There’s a really cool story about how Luke realized the darkness that was inside Kylo Ren, and considered killing him, to the point where he had a light saber raised over Ren while the boy was sleeping. The story is told like Rashomon, through multiple points of view, so that we can see the way each character interpreted it. And eventually we get the truth. It’s an important moment, since this is the single situation that led to Ren destroying the Jedi temple and joining the dark side.

The Kylo Ren, Luke, and Ray story goes further. Ray and Kylo Ren share a strange connection that neither one of them really understands, where they are in each other’s thoughts. They can project and see each others surroundings, and even touch  each other’s hands. We later find out the reason for this connection, but throughout the film, the two use this to talk to each other, and try to understand what’s going on. Ray sees the good in Kylo Ren. Skywalker doesn’t want her talking to him at all. But Ray has other ideas and actually goes to see him, which leads to her coming face to face with the evil leader in charge of the Dark Side, General Snoke (played in motion capture by Andy Serkis.)

General Snoke, as a character, looks terrible. This is probably the worst use of CG in the movie (although those ice foxes at the end come pretty close,) and he looks completely fake. Many people, including myself, had problems with Snoke being presented as a hologram in the first movie, but that was mainly because we didn’t know he was a hologram, and he just seemed gigantic. That movie’s presentation of Snoke was still a thousand times better than what we get here. Even Snoke’s voice is lousy, sounding exactly like Andy Serkis, without any kind of change or disguise. Serkis has done great accents before, (like the one he did as Claw in the Black Panther movie,) but here he’s not even trying. The Snoke sequence itself is a bit of a mixed bag. What happens to him is pretty cool, and so is the fight with Ray and Kylo Ren taking on Snoke’s red soldiers, but nothing about this feels great. What Ren does is predictable, (especially when Snoke shouts that he can see everything Ren is about to do,) and the fight choreography itself is not very good. But on the plus side, the idea of the fight breaking out is pretty awesome, and so is the directionRen goes in after the fight is over.

The reason for so much talk about Ray and Kylo in this review, and so little about Po or Fin is because their stories are both particularly poor. Fin, more than any other character, gets the short end of the stick. He is sent off to Kantobite, a casino planet, where the mission is pretty much all for nothing. He and the woman he’s accompanied by (Rose, the sister of the Asian bomber pilot who dies at the start of the film,) end up finding someone who can help them. The man is a prisoner and thief, (played by Benecio Del Toro,) but it happens that they find him completely by chance, while locked up. This makes the mission behind their whole casino journey kind of pointless. And Po’s story, involving a new leader who comes in and takes over the rebels, (played by a purple haired Laura Dern,) is also not very that interesting. When the story line revolves around not having enough gas, and having to just sit there, waiting, you know you’re in trouble.

What we do get is some real deaths of some major characters. Now that’s a cool thing to find in the second movie of a trilogy. Peter Jackson certainly shied away from doing it in any of his Hobbit films, saving all the deaths of the villains for the final movie.) Ryan Johnson isn’t wasting the chance to deliver on those, and he does so nicely. It’s great to see Captain Phasma (the gold colored chrome storm trooper,) get an action scene as she faces off against the deserter storm trooper, Fin. And the sequence at the end of the movie, on a salt planet, with gorilla walkers coming after the remains of the rebel army, is also pretty cool. But for everything that works in this movie, there is a ton that doesn’t, such as a very strange scene of General Leia unconsciously flying through space. Some people love this because it shows her finally using the force. But the CGI of it looks so stupid and out of place, that the movie should have known better. There are definitely things to like about this movie, but it also makes quite a lot of poor decisions that often seem like no brainers, (don’t give us a ton of build up about Ray’s parents, including seeing their blurry image through an ice block, just to reveal nothing at all.) The action and storytelling is alright, but the humor and strange choices of what to show definitely do the movie no favors. Coming off of the pretty fantastic entry that was The Force Awakens, this is a definite letdown. It’s far better than the prequels, but nowhere near as good as one might have hoped for.