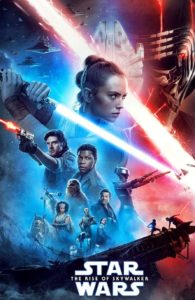 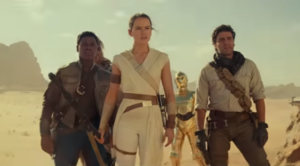 Better than The Last Jedi, not as good as The Force Awakens, this one has plenty of cool material, but it also has a load of problems.

What will most likely be remembered as the worst film of the new trilogy, this one has lots of flaws. The last movie made choices that we didn’t like, but this one makes choices that actually feel like mistakes. Like they didn’t realize that they were leaving certain things out. The action is good and there are a number of cool ideas, but this one sure falls short of the mark, starting with the very beginning and a lack of explanation about a main character being brought back to life. It’s interesting to watch the direction this trilogy ended up going in, (and the changing of directors can’t be blamed for too much, after all the final Hobbit film and the final Matrix film suffered similar fates without changing their director,) but this one really should have been much better.

Star Wars: Episode 9. The final film in the Skywalker Saga (that’s what they’re calling these nine movies now.) Unfortunately, The final film in the new trilogy is not all that great. It’s ok, sure, but there are way too many problems. As a whole, the new trilogy is a lot like The Hobbit movies trilogy. The first one was pretty good, but they got worse and worse after that. The difference is, with that trilogy it made sense why it was bad… the Hobbit was one book stretched out into three movies for no good reason at all. With Star Wars, this thing really should have been good. After all, you had JJ Abrahms, a mastermind of sci fi, directing the first and third film.

Abrahms did a fantastic job with The Force Awakens,  the first movie of the new trilogy. Sure, it used the original Star Wars movie A New Hope, as a template for its story, but so what? The action and comedy and creatures and story  were all fantastic. Abrahms is so skilled when it comes to sci fi, (he single-handedly relaunched Star Trek with the Chris Pine trilogy,) that getting him to do these movies seemed like a no-brainer. Abrahms has yet to do anything stupid in a movie. Until now. Somehow, with this new Star Wars, he made way more mistakes than we’ve ever seen from him before. And he’s made a lot of good movies to build up his resume, (Mission Impossible 3, Star Trek, Super 8, The Force Awakens.)

To explain what might have happened with JJ Abrahms here, and this third Star Wars movie, it’s probably a matter of being too comfortable. After all, the only other not-too-great movie on his resume is Star Trek: Into Darkness, which is similarly a sequel to something Abrahms already made one entry of. With the first Star Trek movie (and Star Wars movie,) he puts his all into it, in order to prove himself. With the second one, he’s already accomplished his goal, so now he just gets lazy. How else to explain not giving any sort of reason or justification of how Emperor Palpatine, (the big bad – ultimate villain of the other trilogies,) is still alive? And that’s just how this third movie begins.

Let’s back- track a little here. Emperor Palpatine was the big bad in both of the other trilogies. He was the one who turned Anakin Skywalker into Darth Vader, (in the prequels, which are far worse than any of these newer films,) and he was the one who Darth Vader was working for in the original trilogy. Darth Vader ended up redeeming himself, (somewhat,) when he threw the Emperor down an air shaft at the end of Return of the Jedi, in order to save his son,  Luke. And then the air shaft and the entire planet it was on blew up. Palpatine was dead. He was as dead as you get. So how in the world is Palpatine back? This movie never tells us.

Now, let’s be clear… it’s pretty cool that he’s back.. After all, it means connectivity with the other eight movies, by having the same villain overseeing things in all three trilogies. Even if his taking credit for being behind all the villains that came before him, (like Snoke,) feels just like Blofeld taking credit for all the Bond villains of previous movies in the Daniel Craig Bond films. That is to say it feels kind of forced or retconned in, but it’s  okay. Still kind of neat. The problem comes from the lack of explanation. By not showing or telling how The Emperor survived, we start to doubt that he can ever die at all. Why should we believe it, if he does? And the movie goes on to reinforce that idea as more and more characters keep seeming to be die, (or losing all their memories,) just to see that we were wrong and the characters are just fine. It happens again and again in this movie, and it’s quite annoying.

So now let’s talk about some of the good. The start of the movie is pretty good. The opening crawl explaining what is happening, works. It tells us that Palpatine’s voice has been heard around the galaxy. And then we get a cool sequence of Kylo Ren (Adam Driver,) going to find Palpatine in his hideout. It involves walking under a pyramid, taking an ancient elevator down, and then coming face to face with a tank full of Snokes. That’s right. Snoke was just a puppet. A clone. This is all coming at us fast, but it’s pretty interesting. So is the training we watch Rey undergoing, when we see her for the first time,  and the game that Finn and Po play against Chewbacca onboard the Millennium Falcon (a call back to the original Star Wars films.)

And soon the real story kicks into gear. There is a spy in the First Order (the bad guys,) and he has told our rebels (the good guys,) that Palpatine is still alive. So the Rebels are now out to find him, and bring him down. Emperor Palpatine, meanwhile, has created an army which he calls The Final Order, (a nice play on The First Order, crafted for this movie to make it feel like the end,) and The Final Order is composed of tons of spaceships, each with their own Star Destroyer Cannon on board, (basically their own mini-Death Star, a cannon so powerful it can destroy an entire planet.) All of this work. It works to make the scope of the movie feel big, the way the third movie of a trilogy should.

Our heroes, upon learning about this, realize they have to find Emperor Palpatine and his army fast. Which means figuring out what planet he’s on and then finding a way to get there. The quest to do these two things pretty much takes the entire movie. It involves all kinds of McGuffins that lead from one place to the next… a lantern like pyramid shaped object, a dagger with a code written on it. And in chasing these items down, it leads us to lots of action scenes.

Most of those are pretty fun. When the Storm Troopers chase after our heroes in a desert,  who are flying away on a speed bike, for example, the storm troopers use jet packs to fly. And our heroes start shooting them out of the air. When their speed bike blows up, our heroes land in quicksand, which brings them down into underground caves. This is when they come across a snake, and Rey discovers a new power. It will be used again and again throughout the film, and it’s the kind of power that really takes away from the consequences and value behind certain actions. Let’s put it this way, it makes certain things a lot less meaningful if we just know that they can be undone. The snake sequence is where the movie first starts to lose some of its momentum.

The hunts, chases, and pursuits of these objects that will lead them to find the Emperor and what planet he’s on, continue throughout the film. For the first time, we get scenes of all three of our leads (Rey, Fin, and Po,) on missions together. We get Lando Calrisian back, (Billy Dee Williams,) and he’s got a number of scenes. One of them in particular, where he talks about him, Han, Luke, and Leia, and how they were never “ready,” is pretty cool. And the scenes between Rey and Kylo Ren are great. They always have been. These scenes were the best thing about the last movie.

But here, there is a little too much going on. There are two new female characters who each get stories and back stories. One is a former spice smuggler who used to know Po, and the other was a former storm trooper just like Finn. Rey discovers that she has two new powers. One of them works, one of them doesn’t. The one where she and Kylo are so connected that they can grab things from the location where one of them is in, works nicely. It starts with Kylo grabbing a necklace from around Rey’s neck, when they are in two different locations, and ends with a nice move during the climax. But the other power, which is introduced with the giant snake sequence, doesn’t work at all. Maybe it’s because the movie is trying to do too much. Two new powers, both at the same time? These things need to be gradually developed. Not just forced on us.

While the movie definitely has mistakes with its plot, (what Rey’s lineage turns out to be doesn’t quite seem right, or to make any sense at all,) it also has a lot going for it, including an excellent surprise cameo from a deceased character, and a nice spaceship climax that connects well to the events at the end of the last movie. And speaking of that last movie, there are lots of ret-cons here, (like the way Luke Skywalker now treats a lightsaber, and what he says about it,) but they’re mostly kind of funny. And the look of the movie and action are of course great. So The Rise of Skywalker is a mixed bag between good and bad. There are plenty of flaws, but there’s also plenty here to like and appreciate.