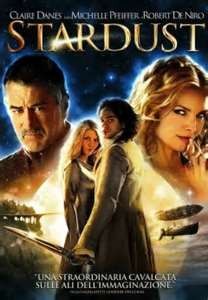 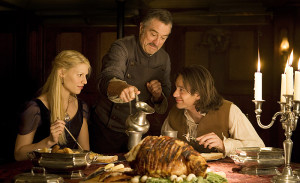 A smart, exciting adventure movie reminiscent of something like the never-ending story, with all the legends and magic.

Stardust is a very creative picture. It’s a matthew vaughn movie, which is really the only reason i saw it. vaughn is a director who takes his subjects seriously. he knows how to have fun, but he doesn’t lose track of what he’s doing, and always puts story and audience emotion ahead of everything else. Stardust is the second movie he directed, after the brilliant daniel craig gangster film, layer cake. after Stardust, he made the fascinating teenage superhero film kick ass. and now he’s got his fourth movie out, x-men: first class.

With Stardust, vaughn veers more into the realm of fantasy than he ever has before. which is a dangerous idea. he manages to pull it off by not having any beasts or other worldly creatures. instead, he brings in mystery. he opens his movie with the story of a boy trying to cross a mythical stone wall. apparently there’s a magical land on the other side of it. the boy crosses the wall, goes into the land, meets a beautiful slave woman, and then returns to his home.

nine months later, a child arrives at his doorstep. that’s the introduction. nothing all that magical to it. yes, there was a miniature two-headed elephant in the magic world, but it was so tiny, that it was like a set design in the background. vaughn is smart enough to keep the magic stuff limited.

the movie is really the story of the son. he grows up to fall in love with a local neighborhood girl. only she’s planning to marry a hotshot hunk, named humphrey. the boy’s name is tristan, and he asks this girl he’s enamored with, victoria, how he can win her heart. they watch a falling star go by and she tells him to bring it to her. if he brings her the star, she will agree to marry him and not humphrey. this sets tristan off on his quest.

he finds the star in a deep hole. only the star is actually a person. it’s claire danes. and tristan is apparently not the only one after the star. we see four old witches standing around a cauldron in some sort of lair, and they are plotting. if they can get this star and bring it back, then they can do a magical spell on it to turn them all young again. one of these witches decides to set out after the star and try to bring it back to her sisters. she uses the last of their magic potion to turn herself young temporarily, and suddenly she looks like michelle pfeiffer, beautiful as ever.

as if that wasn’t enough, we also travel to a kingdom where a dying father (peter o’toole), is trying to decide which of his sons shall inherit the throne. he decides it will be based on whoever can capture the star first. and so the sons go off, every man for himself, ready to hunt for the star. one of these sons is mark strong, the actor who keeps appearing in more and more movies these days. strong likes to work with the same directors including guy ritchie and ridley scott. he has now made two movies with each director, including matthew vaughn. for vaughn, he also played the lead villain in kick ass. but here, in Stardust, he is only a secondary villain, if that. michelle pfeiffer’s evil queen is the one to keep your eye on.

As the movie goes on, the different brothers find ways to kill each other. and every time one of them dies, he joins the others as a sort of green ghost sitting on a ledge watching and commenting on everything. it’s an interesting idea, especially from a comedy perspective, and reminds me a little of the brownies in willow, also miniature people making comments, but unable to do much themselves.

tristan and his star, yvaine, find themselves being captured by pirates and dealing with the captain, robert deniro. the pirate ship has a giant blimp attached to it’s roof, like a sail, and it flies through the air. deniro ends up befriending the two of them and training tristan in the skills of swordplay.

the movie eventually brings all story lines and characters together for the climax, but not before tristan can go back and deal with some of the things that happened in the beginning. there’s victoria, the girl he left behind and went on this quest for (sienna miller), and then there’s also his mother, and the storyline that served as the introduction to the film. i like the way matthew vaughn doesn’t forget about anything. if it happened in this movie, then it has a place in the entire movie and will some how factor into the ending.

Stardust is a very fun film. while there isn’t anything absolutely amazing about it, the ideas are all very fresh and very creative. the storyline is the strongest component here and aside from the lord of the rings trilogy, this is probably the best fantasy movie of the past decade. there have been many others that tried, like the golden compass, but Stardust is something special. because unlike all of those other movies, including lotr, it knows that it doesn’t need beasts. it can do enough with magic and mixing different story lines together. the idea to make the star a person was a stroke of genius and all of the other ideas, such as deniro’s flying ship, seemed to find their place around the central premise. i liked that there were so many characters after the star, and was glad that it wasn’t just tristan and the witch. having the king’s sons hunt for it too added both comedy and also some extra depth to the story. so did the great introduction about tristan’s father. this was a very smart and creative film with a great sense of fun.