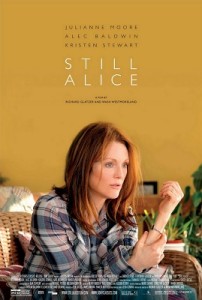 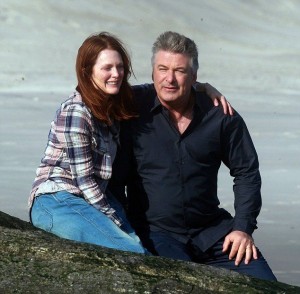 A fascinating and sad movie that really holds your attention and interest.

A very smart movie, this film is sad and dramtatic, but also incredibly entertaining. There’s a reason why certain films win Oscars. Blue Jasmine, Still Alice, and Room all won for best actress, over the past three years, and all of them told incredible stories with strong women at the center. Julianne Moore, in Still Alice, really knocks her performance out of the park, playing a very unflattering role and putting her heart into it. The movie is about a woman with early onset Alzheimers whose condition continually deteriorates throughout the course of the film. It is definitely emotional, and there are a number of interesting debates, but its the little details which really keep this movie believable and entertaining the whole way through.

Still Alice is a pretty powerful movie about a woman with Alzheimers, Early Onset, and how her condition gets worse and worse. This is the movie that Julianne Moore won an Oscar for, and it was incredibly well-deserved. She plays a person going through a lot here, and there aren’t many actresses who could do it better. Just a year before this, Cate Blanchet won the oscar for Blue Jasmine, by playing a character who was crazy, and while that was a better film, Moore, here, shows that she is the better actress. Her skills can be seen in most of her movies, going all the way back to Boogie Nights in 1997, when she played Amber, the motherly porn star who wanted to a normal life her son. With Still Alice, Moore is playing a character who is very normal, and family-oriented, only the circumstances that are facing her are not.

In fact, when people start finding out that her character, Alice, has Alzheimers, they don’t believe it. They think it’s a mistake. She is too young for that to even be possible, they think. But she has a rare and extreme case. We start the movie long before this, at a night out for dinner at a restaurant with Alice and her family. There’s the daughter, Anna (Kate Bosworth,) and her husband, as well as the son, Tom, and then Alice’s husband, John (Alec Baldwin, in his best role in quite some time.) Everyone is here except for one daughter, Lydia (Kristen Stewart.) We meet her in the next scene and learn that Lydia is sort of the one that got away, living in California, pursuing her dream of being an actress. Lydia never went to college and that’s something her mother has still not gotten over.

We watch Alice at work, as a professor at Columbia University, giving lectures and knocking them out of the park. She even gets a nice introduction before one of them from a man who says he spent years disagreeing with Alice and trying to prove her theories wrong, only to find out that she was right about all of them. All of this is meant to show us how smart and accomplished and highly respected she is. And then we get the scene of her going running, on the campus of Columbia University, and forgetting where she is. It’s very well filmed, as the screen goes blurry, and Alice is left standing in the middle of the campus in absolute confusion.

She goes to see a doctor and the idea of Alzheimers is discussed. The doctor asks her to remember a name and address. Then he starts talking to Alice, asking her other questions and having a discussion. After a while, he asks for the name and address again, and Alice can’t recall it. These are some of the first signs that something might be wrong. Two others come right after another in a scene where Alice and her husband are having the kids over for a meal. The son brings his new girlfriend over. Alice meets her in the kitchen, but then when they sit down at the table a little while later, Alice forgets that they have already met. On top of that, she talks about a recipe she is about to make for bread pudding and how it’s her daughter’s favorite, letting us know that she has made it many times before. Only now Alice can’t remember the recipe and has to use her phone to look it up.

The scene where Alice and John sit their kids down to tell them the situation is a pretty interesting one. At first the kids wonder if their parents are getting divorced, based on the serious tone in the room. But then the parents explain, and it goes a little further than just what’s happening with Alice. They tell their kids that it is familial and often passed on from one generation to another, and so the kids should get themselves tested to see if they have the gene as well. Finding this out becomes very scary for such young people, to learn that they will one day be in the same situation of mental deterioration that their mom is in now.

One of the first major scenes of this comes when Alice and her family go to see a play that Lydia is starring in. There is some argument before even leaving for the play, when Alice wants to know exactly where the play will be, and to put the address into her phone. One of the daughter argues that there is no point in Alice doing that, and that she shouldn’t have to worry about it, since they will all make sure she gets there. But then there’s the other argument, that Alice wants to do this, even if it’s unnecessary, so that she can feel like she is taking ownership and responsibility for herself. It’s a great argument. I wish some of the other debates that will come later in the movie, (specifically the one about John considering moving away,) were given this much debate and attention.

And then there’s the play itself, where Alice doesn’t recognize her daughter, asking Lydia if they will see her in anything again, and if she is just there for the season. This loss of memory gets worse. There’s a scene in the vacation home, where Alice and John plan to go for a run together, and he repeatedly asks her about it, to which she responds that she’s ready to go. Only every time she goes in the house, or picks something up, she forgets all about the run. And then she heads downstairs to use the bathroom and can’t find it. The result is pretty terrible. It’s one of the few super dramatic moments in the movie. Disturbing as it is, that’s the kind of content that this movie needed. Scenes that were extreme. There are a decent amount, but there could have been more.

One of the most interesting situations in the entire film involves a recording that Alice makes to herself, with careful instructions of how to commit suicide. Alice designs a test of memory questions. When she can no longer remember the names of her daughters, she is to follow the video instructions and take a whole bunch of pills. It is a fantastic and very sad recording, where a younger, more mentally aware Alice instructs the older version of what to do. Before doing this, however, she reassures the older Alice that she has had an excellent and fulfilling life. Only the movie doesn’t end there.

The end of the movie is about that decision by John to move away. It’s really interesting because the debate is that John does need to move for work, but should he or shouldn’t he be taking Alice with him. When one daughter offers to help out, John feels like the decision has been made, but it could have used a little more going back and forth. For example, doesn’t John feel like he is leaving Alice, moving somewhere else and literally leaving his wife behind? There are some nice conversations between John and Lydia, after the decision has been made, but it would have been great to have some more pondering about the situation before the decision was made.

Still Alice is a really interesting and unsettling movie. In many ways it reminds me of the film Room, which came out one year later, and which Brie Larson won a best actor Oscar for. Both films are about a woman going through an incredibly hard, life changing situation. Both films are incredibly sad, serious, and dramatic. Still Alice works because of the different relationships in the film and ways that each one is put to the test based on Alice’s worsening condition. I like that the movie takes the time, for example, to show her employment situation, and the way she nearly forgets a lecture topic while in the middle of giving it. This movie is detailed and entertaining, and it also sparks up some thought-provoking debates.