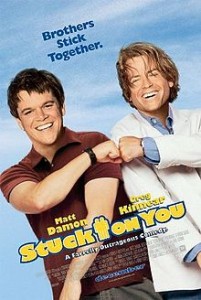 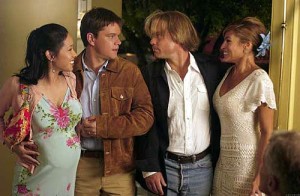 Funny. light-hearted entertainment with a couple of clever ideas sewn together.

Stuck on You is a Farrelly brothers movie, and it’s also in many ways a sort of romantic comedy. Only instead of a romance, this one is a bromance. Literally. The charactera are brothers. They have a lot of issues with each other, starting with the most major of them all… the two of them are stuck together.

Matt Damon and Greg Kinnear play conjoined Siamese twins. They are stuck together, right down the middle. Only the Farrelly brothers would think to make a movie about guys like this. They are, of course. the two directors who brough us Dumb and Dumber, Kingpin, and There’s Something About Mary. Those three will always be their biggest and best films. All three of them were knocking the ball out of the park, examples of very funny films. After that, however, the Farrelly brothers decided to start something trying something new.

They started making movies about handicapped people or people with major and severe misfunctions. Sometimes the handicapped part wasn’t especially obvious, but other times, it was right there, up on the screen, along with the tagline to the film. There was Me, Myself, and Irene, about a guy with multiple personality disorder. Then Shallow Hal was about obesity and weight loss. Stuck On You is just another movie on this list.

Unfortunately for the Farrelly brothers, none of these movies turned out to be very good.  In fact, Stuck on You is the first one since There’s Something About Mary that is even kind of decent. That’s probably because, short of going way overboard with something as ridiculous as shallow hal, it’s the first time in a while where the storyline is up to par. both me, myself, and irene, as well as The Heartbreak Kid, felt like the same old, tired cliches.

but Stuck On You is something different. the story comes out of the situation, not the other way around. the characters start the movie showing off all the impressive things they do in their daily lives just because of their special connection. they have a burger restaurant, where it is all about getting the meals to their customers by a certain amount of time, or else the meals are free. and these two work like madmen to get it done, each doing a different job at the same time.

but then one day, they decide to move to hollywood, and that’s where the real storyline begins. the kinnear character, walt, wants to be a famous actor. and his brother, bob (damon) is always getting dragged along. when kinnear would perform plays, like he did before they left their home in martha’s vineyard, bob would just stand there, eyes closed, pretending not to exist. the sight was pretty funny, but how they would make it work out in hollywood seemed like an impossible dream.

as could be expected, when they first get out there the two of them are practically laughed right out of the business. casting agents think it’s all a joke or a hidden camera show. only cher, playing herself, figures out a way to use these guys. she wants out of her contract for a television show. the studio won’t let her break it. but they did say she can name her costar without any objection from them.

and so she names walt, thinking that now the studio will have to release her. there’s no way they are going to make her costar in a show with a siamese twin. but she’s wrong. and watching the clever ways the show tries to hide bob from the camera is a lot of fun. the camera moves when walt moves and only shows him from certain angles. but even still, bob ends up making it into the frame.

meanwhile, aside from this walt goes to hollywood plotline, bob gets a storyline of his own. he has been talking online to an asian girl named may for a number of years now. may lives in hollywood. bob has never told her about his situation, and so he is hesitant to meet her. walt calls her up and makes it happen. now bob and may go on numerous dates while strategically hiding the fact that he and walt are connected. it gets pretty creative. there’s the drive through meal eaten in the car, sitting side by side, then the dancing date where walt brings a girl (eva mendes, looking fine as ever), and is on the floor every time bob is. and my favorite is the giant teddy bear that walt hides inside of while bob lays on the bed beside it.

Stuck On You has a lot going on. it is inevitable that the movie will follow the usual romantic comedy formula and the characters will have a falling out and grow apart, but the movie even handles that well, showing how much the two brothers miss each other as bob can’t keep his balance or hold down the same jobs and walt falls asleep next to a statue, positioned in the same way that bob would be. the movie is very smart and witty and filled with interesting ideas. and like any farreley brothers movie, it holds nothing back. so we get to watch or hear about how one brother has sex, masturbates, or uses the bathroom, while the other does not. every idea is thought of here, including what would happen if one of the brothers drank and the other brother drove. it doesn’t work out as well as it sounds for them. the movie is smart, clever, and a lot of fun.