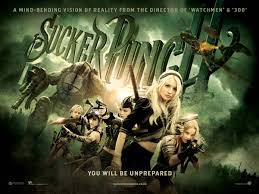 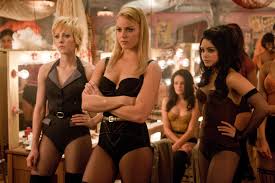 A pretty stupid movie that jumps into crazy fantasy whenever it feels like it, even if it has nothing to do with the story.

Sucker Punch is the movie that proves just how much plot matters. Even in an action movie. I used to think it didn’t. When watching old Jet Li movies and admiring the action skills, plot was the least of my concerns. but still, there was a plot there to hold everything together and connect the pieces to each other. there was a reason why he was kicking butt against the guys he was fighting. in sucker punch, there are no reasons. it’s kind of like watching a video game or a music video. cool visuals, sure, but nothing more.

now the movie does have an overall plot, which is about a girl who gets sent to a mental institution which doubles as a sort of brother / strip club. and a band of about five girls plan to escape. but then the movie does something strange. every time the main character, baby doll, does a dance, the screen changes and she ends up in some crazy action scene that has nothing to do with anything.

the idea is that while she’s dancing, she’s thinking about this other situation, imagining herself in the middle of some crazy gunfire or something. But what ends up happening is we get transported into this scene which really does feel out of nowhere, and which we are supposed to care about, even though the enemies and situations all feel ridiculously fake.

part of the problem is that all of the effects are computerized. In today’s day and age that’s the way things generally are, but at least with computerized effects, we usually get real backgrounds. here, ever single action scene is in an entirely fake atmosphere. it’s like watching a moving painting. and sure it looks cool, but it also looks ridiculously fake. nothing about it feels in any way real or consequential. we know they can do anything with computers, so seeing them do anything doesn’t impress us. what would impress us is if they actually did some of it for real.

the digitized action scenes are meant to just represent as many random fantasies as Possible. each one features a different kind of enemy being blown to bits. so the first one involves giant samurai warriors wielding both swords and gattling guns. that’s the best one, mainly because it’s the first one and so the scheme hasn’t gotten tired yet. by the second fantasy, this whole idea has worn out it’s welcome. There’s one that takes place in the trenches of world war I and involves Nazi zombies, another that takes place on a space ship and has the girls fighting robot soldiers, and still another that takes place in a castle as the girls fight off dragons. at a certain Point, it’s overkill.

The movie features Scott Glenn as the sort of “guardian angel” in the fantasies, who guides the girls along their way. in the first fantasy he sat with a sword in a temple, legs crossed, telling baby doll a list of five items she would need to find in order to escape. a map, a fire, a knife, and two others. the last one is the answer to a question, and he doesn’t tell her what the question is. how clever. can you sense the sarcasm?

the idea of the movie is that these girls have to find each of these five items in the mental institution, and they have to steal them and then hide them. they do this by running around in secrecy while baby doll is distracting everyone with her performances. And so while we are watching some crazy, meaningless fantasy, the girls are out there stealing the important items. in other words, we’re missing the part of the movie that could have actually been interesting.

The appeal of this movie is meant to be a girl’s against the institution sort of action One Flew Over the Cuckoo’s Nest. it is also meant to add to the appeal that these are hot young girls, scantily clad, kicking ass. none of it works. maybe it’s because the movie is too dark, or maybe just too action oriented, but nothing about the film seems sexual at all. and none of the girls really have personality. I suppose two of them, rocket (Jenna Malone) and her sister, have a little something going on, as they debate over whether or not to help baby doll, but that’s it. neither baby doll nor any of the others has any personality at all.

Zack Snyder, who has clearly let success and arrogance go to his head, directed the movie. Snyder debuted as a filmmaker by turning out a remake of dawn of the dead. that movie was clever and fun. after that, he made the masterpiece that is 300, which turned out to not entirely be due to him, but also to be a story about being in the right place at the right time. It was the first of the graphic novels brought to the screen, to be followed by movies like sin city and Snyder’s own watchmen, shortly after. Watchmen were Snyder’s first movie that wasn’t as good as the others. it was a fine film, but overly long, and it took itself too seriously. Snyder was starting to compromise story for style, and luckily he had enough things working for watchmen to pull it off. with sucker punch, his good luck finally ran out. It also happens to be the first time Snyder wrote the screenplay himself, instead of taking something that somebody else wrote and making it into a movie. With dawn of the dead, 300, and watchmen, there was excellent and well-known source material there, for Snyder to use as a blue print. with sucker punch, the whole thing was his creation, and it turned out to be a disaster.

Snyder is still a pretty smart guy and a hell of a director. he just got carried away with this movie. he reached a Point where he started thinking that he could do no wrong, and that was a huge mistake. his success had come from adopting other people’s story lines for the screen and that’s the way he should have continued. remake the wild bunch or commando or some other classic action movie from decades ago. Sucker punch became Snyder’s wet dream, his ultimate fantasy, making as many action scenes as possible, with as many cool enemies, and not having to think about little things like story. By the end of the movie, we have long since given up. Our interest is shot by about the half waypoint. That’s because this movie is tiring and also uninteresting. at a certain Point we just stop caring. yes, there is a lot of style going on here and some cool visuals, but unfortunately there’s nothing more.