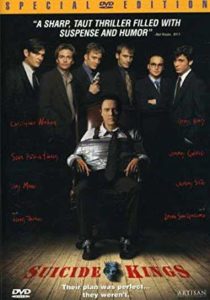 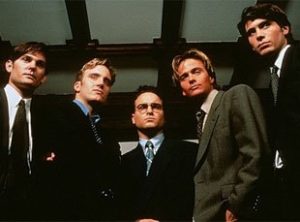 A pretty good premise works when it goes for the mystery angle, but not so much when it attempts to do comedy.

There’s a good story here, at least initially. A bunch of prep school kids kidnap a mobster in order to get information about a girl who has been kidnapped herself. The mobster had nothing to do with the kidnapping of the girl, but the boys think that he has the kind of connections where he can find out who took her, and also get her back. And so they hold the mobster hostage in a house while his people scour the streets trying to find out who took the girl. It’s pretty creative, but it’s also a little too neat. Things work out here that really ask the audience to suspend their judgement, from the way the guys kidnap the mobster to the idea that his people would be out looking for the girl, instead of just looking for him, (turns out they do both.) What works is the one night in one house mystery. What doesn’t are the attempts at comedy which this movie occasionally tries for. And the ending has a few too many twists. There’s some good stuff here, but the movie definitely has a few missteps along the way.

Suicide Kings is a movie that features  a very simple premise, yet ends up being kind of twisty and smart fun. Like Wild Things, another movie that is very simple by its nature, yet filled with twists, this one keeps getting more and more interesting until it gives us one twist too many. But for most of the movie, there’s a pretty clever concept at hand, unfolding bit by bit. A bunch of prep school friends react to the kidnapping of the sister of one of the guys, by kidnapping a mob boss themselves, who they think can help get the sister back. The mob boss, Charlie Barrett, (Christopher Walken,) has nothing to do with the kidnapping of this sister, Elise, (who is also the girlfriend of another one of the guys in the group.) But the boys think that Charlie has the kind of connections and strings he can pull to get answers and find out who took the girl, as well as get her back. And so they hold Charlie hostage in the upscale house of one of their friends, and vow to do to him whatever the kidnappers do to Elise.

Now, this storyline makes for what is pretty much a one night inside a huge house kind of premise. It is reminiscent of other one-night, one-house mysteries, especially when it turns out that one of the friends might be responsible for the kidnapping. This all goes back to murder mysteries like And Then There Were None or Clue that take place inside mansions where the guests come to realize that one of them is the killer. And the movie gets a lot out of that idea. In a sense this is giving us a new angle on a classic formula. There’s no murder mystery here, but this definitely feels like a party of sorts, inside a mansion, where somebody is not who he says he is.

It starts off by introducing us to the characters just a few at a time to show us the events that will lead up to the kidnapping. First we meet Max (Sean Patrick Flannery,) and Avery, (Henry Thomas,) as they sit at a table in a hotel lounge having drinks. Charlie, the big shot gangster, walks in and is greeted by everyone at the place before being told by the bartender that he will check on Charlie’s table. This is the table with our two boys are sitting. They refuse to leave until they finish their drinks and then they see it’s Charlie’s table and begin apologizing. They know who he is and don’t want any trouble. Charlie says its no bother, and the boys end up inviting him to come sit with them for a drink. Not long after this, their third friend, Brett (Jay Mohr,) shows up and the three boys convince Charlie to go with them to a party at Avery’s father’s place.

Now, it’s unlikely that Charlie would have first sat down with the boys, (here’s a guy who knows everybody, and would have easily just joined other friends at another table,) but supposing that he wanted to try something different and join these young guys for a change… it’s even more unlikely that he would do the second thing. Leave with the guys to go to a party. At the very least, Charlie would call up his driver and muscle and have him drive the whole group to the party. But here, we are meant to overlook this. Still, it would have been nice to know the backup plan, had Charlie not agreed to do all of these things on his own free will. What other ideas did they have in mind, if their first plan was met with some objection?

But once the four of them get into a car, this movie shows us exactly what the boys have planned, and how they planned it. This is where the movie starts to get good, (and we are still very very early in.) We see a flashback to the group sitting in chairs on a rooftop enacting and role playing what will happen once they get Charlie into the car. The conversation and camera work are both fast paced, with all characters on the roof feeling tense and cutting each other off. Here, on the rooftop, the trio is joined by a fourth friend, T.K. (Jeremy Sisto,) who is the medical student in the group. T.K. is the one telling the others exactly how much chloroform to use to drug Charlie, and what to watch out for as signs that Charlie is not doing well once under the effects of the drug.

The movie does two very smart things here in these early scenes. First, it introduces us to the characters one at a time. With each new location, we get another friend joining the group. It starts out with just the two friends sitting around having drinks. Then Brett joins them at the table, and then T.K. joins them on the roof. This slow introduction process helps the audience get to know each character and differentiate between them. Once at the house, we meet still another one of the friends, Ira, (played by Johnny Galecki.) Each friend is very different and we get clear distinctions between them. Avery is the worrier, Ira is the nerd, Brett is the jerk, TK is the smart one, and Max is the cool, relaxed one.

Aside from how it introduces us to each of these characters, the other cool thing this movie does in its early scenes is it shows us the rehearsal for the kidnapping on the roof, (complete with blow up doll that is meant to represent Charlie, in the passenger seat,) by cutting it back and forth  with the actual scenes of the boys kidnapping Charlie in the car. So on the one hand we have them sitting around discussing all things that can go wrong and exactly how and when they are going to do the kidnapping. And on the other hand, we are simultaneously getting to see the way these events actually do play out, in real time. We cut from the rooftop rehearsal to the tunnel that they are driving through and see the plan in action. And boy does it go horribly wrong, with Charlie going crazy trying to escape. The intercutting between the hypothetical and the real is a fantastic move.

Whats not great here are the attempts at comedy.  These start with Dennis Leary, who plays Lono Vecio, Charlie’s right hand man. Leary is generally a very funny actor, who has fantastic, anger-fueled stand-up rants. But in this movie he’s trying just a little too hard. There’s that, and then there’s also the fact that the writing for his character is pretty terrible. So the first time we see Vecio, is in a car driving around with an associate, discussing his sting-ray boots. And they don’t stop discussing these boots for pretty much the entire first half of the movie. They discuss everything from the price of the boots and other things Vecio could have used that money for, to exactly how the person who made the boots must have killed the sting ray. Vecio’s friend doesn’t think the boots were a very good purchase and he lets Vecio know it. And Vecio just keeps going back and forth telling this guy more and more about the boots, as if there was a point to any of it. The idea is that it’s supposed to be funny, like a rant that Vecio is going on, but it comes off as more annoying than anything else. Especially since none of this advances the plot in any way. That same level of annoying also applies to another character that we meet, once the boys arrive at the house.  Ira. Johnny Galecki is definitely cast right for the role, but his character is incredibly annoying with constant complaints and whining about how the boys are treating his father’s house. Once in a while Ira has a funny moment, (like his interactions with Max, noting that Max took off his shoes, or telling Max about the inside player theory,) but usually he’s just pretty irritating.

The problem with this movie is that the plot is basically a strong premise with not enough follow through. The longer this thing goes on, (and it’s not exactly a long movie, coming in at under two hours,) the more we realize how thin the storyline is. There’s nothing about exploring the house or having different kids die at different times, (like you would expect from a classic mansion murder mystery.) Instead, there is just a little bit of suspicion towards one of the friends, who had a big gambling loss, and other than that, we don’t really get a whole lot. The movie is smart enough to make the setting a rainy night, but a smarter film would have given the characters reason to explore the house. Consider this… at one point someone who works for Charlie gets in. It’s the perfect reason for the kids to start wandering around, looking for the intruder, and getting picked off one by one. Only they never do.

And maybe there’s a good reason for that, with the movie more interested in the question of who the inside player is than anything else. But then it should have raised more suspicion about some of the other characters beside the one gambling kid. So, while the mystery inside the house could have been better, the one going on outside, on the street, involving the kidnappers and Charlie’s people trying to locate them, isn’t bad. The movie slowly reveals a little more at a time about these guys to us, and definitely holds our attention. But then the twists start coming, all of a sudden, one after another. They are dealt so quickly and with so little explanation, that it just complicates and muddies the waters, instead of leaving us feeling thrilled or even satisfied. Like Wild Things, it’s a case of one twist too many. This movie has a lot going for it, including a great premise, some cool atmosphere, and also a very strong cast. But it also has a handful of missteps including its attempts at comedy and an ending that doesn’t quite work.