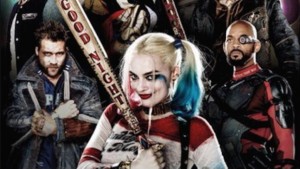 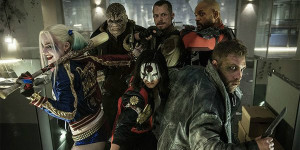 A movie that tries to exist on simplicity and humor and doesn’t really accomplish much of either, the action and plot are okay, but this movie could have and should have been a whole lot better.

A flawed movie on multiple levels, this one is okay, but definitely leaves a lot to be desired. What works about the movie is the casting and the characters. Will Smith, Margot Robbie, and Viola Davis are all pretty good. And their characters are entertaining. But this movie has a very simple plot and the darkness that has plagued all films in the D.C. Cinematic Universe is unfortunately back on display here. There might be some neon colors thrown into the mix, like paint on a black surface, but the night time setting and the depressing attitudes of most of the characters really don’t do this movie any favors.

Suicide Squad is the DC cinematic universes attempt at an answer to Marvel’s Guardians of the Galaxy. What that means is that Guardians was an unknown property of a team of superheroes that nobody really cared about, and Marvel brought it to the mainstream and made it something terrific. Unfortunately D.C. and Suicide Squad just don’t have that same spirit, energy, creativity, or tone. For starters, Guardians was an alien other-worldly Star Wars – Star Trek kind of thing. Suicide Squad stays grounded  on earth, with characters who are more depressing than they are lively. The humor isn’t there in the same way that it was for Guardians either. And despite the neon colors in the background, this movie is still dark as hell.

Suicide Squad is directed by David Ayer, a man who made his name by writing hardcore cop films from Training Day to Dark Blue. He directed a few movies as well, such as End of Watch and Fury, but writing has always been his game. Ayer is by no means a talented director, but he’s a guy who has been around Hollywood long enough to know the tricks of the trade, and know what kind of thing works. He reminds me of Shane Black in that way (also a screenwriter turned director, the man who helmed Iron Man 3.) With Suicide Squad, Ayer has been given a movie about “bad guys.” They tote these guys as being the worst of the worst. And yet this is not an R rated film. So they can’t exactly show us the worst of the worst. And the guys never kill an innocent person, or anything like that, either. They aren’t as bad as they keep saying they are.

That lack of an R rating was an issue for some people, coming into the movie, (especially after the success of the R rated Deadpool.) Not to worry. The movie is just fine without it. The other concern was that maybe this would be the Will Smith show. It’s supposed to be about an ensemble cast and a team of villains, and yet getting this A list star, who is notorious for hogging the attention (he turned down Django Unchained because it wasn’t his character who got to kill the bad guy,) might be a problem. It isn’t. Is this the Will Smith show? Yeah, kind of. But it turns out to not be a problem at all. He does get more attention than anyone else, but to be fair, he is the biggest star at the table. Somebody’s gotta step up and be the leader of the group, so why not him? And he does a fantastic job with it, really giving this movie his all. Smith has been hurting lately from a lack of decent projects. This movie is a step in the right direction. He turned down Independence Day 2 to go and make this movie. Now, that was a smart decision.

Suicide Squad is the kind of movie where there are exactly two ways to look at it. You can either focus on what’s there, on the screen in front of you, or focus on what’s missing. And there’s a lot to say about both. The difference is that if you focus on what’s missing, you will not enjoy the film, nearly as much. Now, that’s not to say that whole chunks of plot are left out or anything like that. The movie is coherent and makes sense and it flows pretty nicely. It’s just to say that there are things that maybe could have been shown or explained a little better. For example, not every one of the villains (or heroes, depending on how you want to look at them,) gets a backstory. We barely learn a thing about Killer Crock, Captain Boomerang, or Slip Knot. Getting one quick scene of these guys getting captured doesn’t count. It’s just not enough. But on the plus side, maybe not having every character get his own storyline is a good thing. Maybe it would have been too much, and what we have here instead is the better, more interesting way to go. It certainly keeps the pace moving nicely.

The characters who the movie does focus a lot of attention on are Deadshot (Smith,) Harley Quinn, (Margot Robbie,) Diablo (Jay Hernandez,) and the Witch, who is one of the big villains that the team must face off against. Each one of them, as well as some of the others, gets a quick scene introduction with music. And for each of these scenes, it’s a different song. The introductions come as Amanda Waller, (Viola Davis,) explains to two other men, at a dinner table, exactly how these guys got captured. And there’s a freeze frame on each one of them that lists off a whole bunch of statistics, many of them pretty humorous. For example, Deadpool has killed someone with a potato gun and Boomerang has a fetish for pink unicorns.

There are some great cameos from Batman during this sequence of showing how the villains were captured, and from there, we go to Waller standing in front of a board, making her case for why these people should be let out of their cells in order to help the government as an undercover mission team. Think of it like The Dirty Dozen of superheroes. Her presentation, including The Witch coming out of a scientist by flipping her hand over, to reveal the demon hand, is great. There’s even some humor in the scene too, (“please don’t touch me.”) Waller talks about Superman and how the world changed when he arrived and then changed again when he disappeared. She talks about putting together a team of “meta-humans,” who could take on something like that. The only problem is that most of the people on the team are not metahumans, but simply cool assassins who are deadly with the right weapon. Only Diablo (who shoots fire from his hands,) and maybe Kitana (with a sword that has souls in it,) have anything supernatural or magical to them. The rest are all more like vigilantes. Of course, in the case of Killer Crock, we have a severely deformed individual, but meta-human, I think not.

Still, the movie doesn’t address whether these guys are all meta-humans or not, and so it’s easy to ignore that most of them aren’t. What we do get to see is what makes most of these team members special in combat. Deadshot has a scene all to himself where he gets up on a car and single-handedly takes a bunch of enemies out. And that’s not to mention his opening scene, where he uses some technology to line up and shoot down a whole ton of targets, all at once. Harley Quinn has a scene in an elevator where some enemies bust in and by the time the elevator stops moving and the doors open, she has taken them all out. And you have to love all of the scenes where Rick Flagg (Joel Kinnaman,) the human in charge of the task force as well as this squad of villains, keeps getting himself into danger and needs Harley Quinn to come and save him. Considering that these are bad guys, it’s a good touch that her first reaction is to let Flagg die, until Deadshot convinces her that they need him.

It’s also nice that the movie gives us a reason why these guys would stick around and fight for Waller, instead of just cutting and running. They have explosive implants in their necks. The movie even shows us what happens when one of them tries to escape, anyway. Let’s just say, those explosive devises are not there just for decoration. The team members are sent out onto the deserted city streets with a mission that they are unaware of. They know they have to get somewhere to retrieve something, but that’s about the extent of what they have been told, and what they are out to get turns into a little bit of a surprise.

At this point in the review, there’s been no mention of the Joker, played by Jared Leto, and that’s because he really is barely in this movie. He’s got little pop-ups, every now and again, with Harley Quinn’s storyline. There are some flashbacks which show how she got to be the way she is, (a combination of electroshock and then a bath in a vat of chemicals.) The Joker is involved with all of these. And then he’s got a couple of scenes sprinkled in, of trying to help Harley escape from prision or escape the Suicide Squad. But that’s about it. Now, the Joker is the one that everyone’s coming to see. He’s the drawing factor to this film. But since the scenes he’s in aren’t very good, there isn’t exactly a desire to see more of him, and so maybe not having him in the movie too much worked to the films advantage.

But one thing that definitely doesn’t is the lack of color and humor. The movie tries to hide its darkness, throwing neon colors into the mix in the ways of Harley Quinn and the Joker, but it’s not enough. If you don’t want your movie to be dark, how about not setting nearly the entire thing at night? Then give all the characters a little color, not just two of them. Other than Harley Quinn, everyone else on screen is depressing. And their back stories are filled with sadness. Suicide Squad has some positive qualities, but for the most part it is not a good film. The action is okay, but the humor and dialogue don’t work and this one really doesn’t have much to offer.