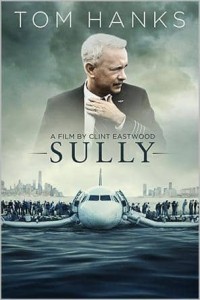 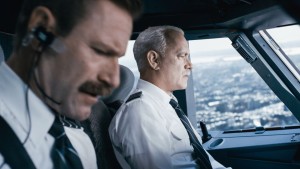 About as good a movie as could have been made on this topic, Sully tells the unbelievable and  amazinng story of the pilot who landed a passenger commercial flight on the Hudson River.

Sully is a very entertaining movie, which is quite an accomplishment when you consider that it is a feature film tied to a real life singular event. When this movie was being made, everyone kept wondering, “how in the world are they going to make an entire movie out of that?” Well, they did, and it’s pretty good. The trick was to cut up the plane going down and landing in the Hudson River scene, so that we see different parts of it throughout the movie. What a smart move. This film knows that it’s that scene we have come to watch, and so it milks the scene for everything its worth, and does so pretty successfully. The story of the aftermath is interesting too, especially by the time of the climax, where we get to watch hearings and simulations that prove new revelations about what happened that day. Tom Hanks gives us another great performance here, and really captures the quiet caring of this man, Captain Sully Suleberger.

The story of “Sully” Sulenberger, the pilot who landed a commercial airliner carrying a full flight of passengers, onto the Hudson River, in 2009, was ripe for a movie. In fact, it was so ripe that before the actual movie about the topic could get made, another film got launched out of the gates a number of years ahead. That movie was Flight with Denzel Washington. It didn’t tell the exact same story, (there was no Hudson River and there was drinking and drug use involved,) but it certainly told the story of an amazing crash landing where a pilot did something incredible and then had to deal with the negative aftermath of his decisions. That movie was the fictionalized version. At the time when it came out, everyone said it was the story of Sully, knowing full well that it wasn’t exactly the same thing, but was inspired by the true events. Now, with Sully, we get the real movie.

This film stars Tom Hanks as the heroic pilot and was directed by Clint Eastwood. Those two names together don’t necessarily spell greatness the way one might expect. Hanks is a fine actor, but he’s certainly made a handful of lousy films in the past decade. And with Eastwood, it’s even worse. Here’s a guy who hasn’t made a fun movie of any kind since Grand Torino, (and calling that movie fun is stretching it.) Eastwood tells true stories. Usually there’s a historical element. In recent years, he made Flags of our Fathers, Letters From Iwo Jima, Invictus (about Nelson Mandela,) Hereafter, and J. Edgar. None of these movies was lively the way it should have been. He also made American Sniper, another semi-political, history based movie, and it was probably the best film Eastwood made in the past decade. Yet it still had the residue of being kind of dull at times when it should have always been exciting, (like, say, Hurt Locker.)

With Sully, Eastwood gets a movie that takes place in the United States during present day, (give or take a few years.) He hasn’t worked with material that has fit those two circumstances at the same time in quite a while. And with this film, Eastwood delivers. The movie isn’t perfect, and it does occasionally feel a little dull, but for the most part, it tells the story of a singular event and finds ways to make that story last for the duration of an entire movie, without ever losing the attention of the audience. This might be the tightest movie Eastwood has made in ages, with very little filler, and mostly straight forward material.

The movie opens with the flight. That’s right. It knows what we have come here to see, and it doesn’t keep us waiting until the end. Now, we only get to see part of the flight at this time. That’s important because this film actually cuts up the flight into segments and drops each of these segments into different portions of the film, so that we routinely get to see another part of what happened, often from a different angle. This is a great move. It would have been lousy if the movie began with the flight and then we never got to see it again, and it would have also been lousy if the movie kept us waiting for it until the end. This method of showing the flight in parts really works. The first time we see it, we watch the flight entirely from the point of view of the pilots, sitting there in the cockpit with them as a flock of birds strikes both engines and the two pilots make a decision to land in the Hudson River.

Those pilots are Sully (Hanks,) and Jeff Skiles, (Aaron Eckhart.) The first reaction from everyone, after the flight has landed, is that the two men are heroes. After all, not a single person was killed or injured at all. The only damage was to the plane. But then the National Transportation Safety Board sits down with Sully and Skiles for a meeting, and that’s when things first begin to get ugly. The board informs the two pilots that one of the engines was still running. They also inform the men that even if both engines had failed, they believe there’s a good chance Sully could have turned the plane around and made to back to a nearby airport. If these things turn out to be true, than the incident can be rules as “pilot error,” which means that Sully is the one at fault. If that is the case, then Sully will lose his job working for the airline, and most likely his pension as well.

This is the conflict of the movie. It’s not exactly enough for a full length film, but it definitely comes close. There are two areas where the movie stretches itself too thin and should have figured out a better way to present. The first is with flashbacks. We see about two flashbacks to Sully as a kid, learning how to fly. We see how his father was the one who motivated him to become a pilot. Who cares? Maybe that would be interesting if this was a movie about Sully’s life, but it isn’t. It’s not a bio-pic. Instead, the old times flashbacks are clearly filler and a waste. Luckily they don’t last very long, and just barely take us out of the movie.

The other area where this movie could have been improved is with the relationship between Sully and his wife, Lorrie Sulenberger, (played by the great Laura Linney.) This is an area of the movie that should have been beefed up. It would have been nice to learn more about the situation from Lorrie’s point of view. We do see when she first learns about it, when Sully calls her and tells her to turn on the television. But we don’t get a whole lot more than that. Understandably, the two characters aren’t really together during the course of the movie, with each of them in different cities, but that never stopped a movie from developing a relationship through powerful phone conversations before. Lorrie should have been more of Sully’s inspiration and champion, assuring him that he did the right thing. There was certainly a little of this, but not nearly enough. Instead, her story seems to be rushed, in order to give her character the bare minimum about of time possible. When she turns on the TV and is talking to Sully on the phone, and her kids are watching the TV in the next room, wondering about their Dad, for example, Lorrie never takes a moment to call out to them and let the kids know that their father is alright.

The movie leads up to a fantastic climax involving a board hearing and multiple simulations. Sully has made the argument that there need to be simulations to show what would have happened if the things the board is claiming were possible, were actually tried. After a while of not being sure whether these simulations will happen or not, we get our answer. In fact, we get to see the simulations live, right alongside the pilots and the board. Two simulations are tried, one to each of two airports. The results are pretty cool and involve a really clever twist.

This movie definitely works, and it’s pretty impressive how much they are able to get out of the story of one single event. Before we get the simulation climax, we see the event another time in closer detail. This time we are not only in the cockpit with the pilots, but also in the passenger cabin of the plane, along with the flight attendants. At this point, we follow the event all the way through the landing to the evacuation of the aircraft. We see how much Sully cares that everyone makes it off, and that there were no injuries, (he is the last to leave the aircraft, doing the final walk throughs himself, despite the plane being flooded.) Tom Hanks is very convincing as the caring and even-tempered pilot, and the character is really represented well.

For Hanks, this movie marks another in a series of more serious and dramatic films. There are a number of directors who make these types of movies, (Eastwood, Speilberg, and Paul Greengrass.) The last time there was a real life, current events story about a remarkable situation like this, it was Greengrass directing Captain Phillips, about the pirate boarding of a U.S. vessel at sea. And it was Tom Hanks in the starring role. Greengrass is also the guy who made the other real life airplane tragedy movie, United 93, about the airplane hijacking that was part of 9/11. So clearly this kind of material involves the same directors and actors in the same sorts of movies. With all of that considered, Sully is one of the better films of this kind. Unlike Captain Phillips, it doesn’t go on too long or try our patience. For Hanks and Eastwood, they have definitely found a successful way to take this story and craft it into a feature film. The result does have some flaws, but they are minor, and ultimately this is a good film.