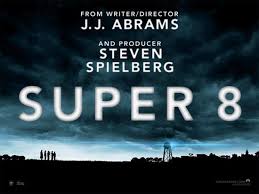 A very cool combination of the Gooiness, Cloverfield, E.T., and close encounters of the third kind.

A very cool mystery film, super 8 has that later seventies – early eighties feel about kids riding around their town on bikes, trying to uncover a monster movie. It was completely inspired by Spielberg’s films (The Gooiness, E.T., and close encounters), and is basically a love letter to those movies, to the Point where director J.J. Abrahams got Spielberg on board as the main producer of the film. but none of that matters compared to how the movie turned out. luckily it all works out very nicely. the movie is smart enough to hold off its big secrets and reveals for as long as Possible, getting us more intrigued with every new clue it adds to the situation. Things do get a little silly or campy at times, but for the most part, this movie really works, and we spend large portions of the movie being either scared, curious, or thrilled.

Super 8 is a pretty terrific movie. It ends up being a monster movie, like Cloverfield, as we all know, but it takes its time getting there, and that’s what makes it so good. it holds out for as long as Possible, making the monster into a mystery more than a beast. The movie is about a town somewhere in Middle America, where a bunch of kids are working together to make a zombie movie. even when weird stuff starts happening all around their town, the kids have their priority on getting their movie done, and that right there is something that makes this movie different from every other monster movie.

Like E.T. and the Gooiness, this movie is about kids hanging out together. they ride bikes around town and all like the same girl. There’s even a fat kid who looks and sounds just like chunk from the gooiness. And aside from the main kid, Joe, this fat kid named Charles is our second lead. his name comes up more than any other character, and he’s the one calling all the shots on the movie they’re making.

Super 8 begins with the aftermath of a tragedy, as Joe’s mother has been killed. we watch as neighbors look through windows at him and talk about him behind closed doors. We also see the guy who is the town outcast (Ron Eldard) try to come to the wake and get booted out by Joe’s father. all of this is presenting to us a human side of the story, telling us that this is not just a monster movie, but a movie about real characters and what they are going through.

it isn’t long before the group of kids is filming a night time scene at an abandoned train station when a real train is actually coming through. the kids can’t believe it. “Production value,” Charles shouts, as he tries to get his cast and crew assembled in order to film the scene right as the train roars passed in the background. only something happens. a car drives onto the tracks right in front of the train and causes a massive series of explosions and accidents. multiple cars of the train go crashing up into the air and large pieces of it come soaring out of the sky. the characters go running off and the explosions continue, all around them, and it is an absolutely fantastic scene. The best part about it, however, is not all the explosions, but the way the kids kept filming their scene for a while, not realizing what was happening, and Joe saw the car drive onto the tracks out of the corner of his eye, and knew something was up.

the kids survive the train explosions, but they approach the car that drove onto the tracks to find that the driver is one of their school teachers. I love that small town feel where everybody knows everybody, and having the kids know this teacher only adds to the mystery. what was their teacher doing on the train tracks? What did he know? another part of the mystery involves strange metallic cubes that are all over the ground, having been on board the train during the crash. The kids take one of these silver cubes with them and run off before the authorities arrive at the scene.

The authorities are the bad guys of the movie. That much I wasn’t crazy about, because it’s kind of a cliché that the army guys are always the villains. The ones working for the government who have authorization to do whatever they want and not tell anyone about it. these characters represent the man and the corrupt organization, and luckily the movie doesn’t make them too evil, but in the moments where it tries, it ends up coming off as kind of silly. Like when one of the army guys takes the necklace off of Joe, which has a picture of his dead mom in it and used to belong to his mom. the army guy takes it from him and drops it into his shirt Pocket. there was no reason to do that, other than to try to make this guy look bad. but it was more silly than anything else.

While we do have the clichéd villains, the mystery around the town is handled superbly. car engines disappear and so do people. J.J. Abrahams who is a very smart filmmaker, and a really clever writer directed this movie. Abrahams wrote the television series, “Lost,” for years and is no stranger to stringing the audience along by telling a story filled with mystery. as a feature film director, he’s been nothing short of impressive. he’s only made two other movies before this, and both of them were practically setup to fail, yet came away as winners. The first was Mission Impossible III, which ended up being far and away my favorite of all the mix. films. It was smart enough to keep things simple and understandable the whole way through (unlike the M.I. movies that came before and after it.) after that, at movie young, fresh, and adventurous, and it was a pretty wild ride.

here, with super 8, he proves just how good he really is. this movie is cloaked in atmosphere, and characters and he really gets to our emotions, while giving us a monster story as well. we really do care about the characters and enjoy spending time with them. Abrahams is smart enough to set his movie in 1979 (the time of close encounters), and as such, he not only gets to play with characters who think they are cool while they talk about disco and things like that, but he also is able to tap into those old Spielberg movies such as Encounters, E.T., and Gooiness.

as the movie gets into it’s final Portion, and more and more starts to be revealed to us, the fun starts to diminish. that’s because the fun of it all was the idea of not knowing the answers to the mystery and being scared of just how much we didn’t know. once you start revealing the monster, the not knowing goes away. Abrahams knows this, which is why he held off on showing the monster for so long. even when we do see the monster, things are pretty cool, but there is one moment where a character gets to talk with it, that is just too ridiculous for me. It’s right out of the ending of the relic or something, and it’s the only moment of the film that I absolutely didn’t care for.

other than that, this movie is superb. It’s got the group of kids riding bikes around town together while hiding a secret about what they saw from the military (E.T.), and it’s got that crazy mysterious tone that Abrahams brought to the show lost. this guy clearly knows how to make a movie. his shots and flashing red lights are brilliant and this movie really delivers. Super 8 works really well in it’s first three quarters, when we don’t know what the hell is going on, but have this group of excited friends to share in the experience with. as it goes on, it does start to run out of a little steam, but only in it’s final act. ultimately, however, it is a pretty fantastic film.