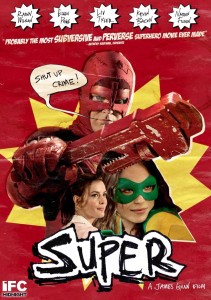 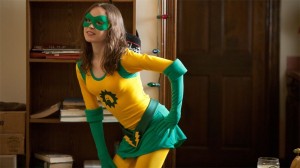 An unusual comedy that tries to take a realistic look at being a superhero and all of the problems that might go along with it.

Super is a movie that takes a look at the superhero genre from the point of view of a regular guy with psychological issues. this movie doesn’t exist just to spoof other films. it’s hardly a satire, like say, “superhero movie.” instead, it is meant to exist as it’s own film that just happens to take a humorous look at how and why something like this could actually happen. in those regards it is much more like the movie kick ass than anything else, and that’s some pretty good company to be in.

the superhero genre has been going strong for about a decade now. really ever since x-men, in the year 2000, have guys with special powers dominated at the theaters. more often than not, they are based on a comic book, and on a famous marvel or d.c. hero. both kick ass and super are not. these characters might be based on comics or graphic novels, but they are from far less known material and that actually gives them an advantage. they are not being held to anything. for example, they don’t have any corny catch phrases that were popular in the sixties when the comics came out, that they are now being required to say.

super works as a black comedy more than anything else. as an actual superhero movie, it is just okay. the action is nothing special. how can it be when it was made as an indie film on a tiny budget and would be comparing itself to giant summer superhero tentpole movies by major studios? so super doesn’t even try. that’s something that definitely separates this movie from kick ass, a film that did go for the big budget action, as well as the comedy. super does not.

instead, it goes for a simple story about a guy whose wife leaves him. that guy is frank, a lonely and innocent man. frank’s wife shacks up with a drug dealer and all of his buddies. the drug dealer, named jacques, is played by kevin bacon, who seems to be the go to actor for playing scum bags like this lately. in crazy, stupid, love, the steve carrell movie out just one year after this one, he played a very similar role. that character might not have been a drug dealer, but he sure was a home-wrecker, swooping in and stealing the main character’s wife.

there are a couple of funny scenes between frank and jacques early on. in the first of these, jacques just shows up at frank’s house looking for frank’s wife, sarah (liv tyler), and ends up inviting himself in. he sits down at the table with frank and asks frank for some of the eggs he’s making. and frank, not knowing what to make of this, and being the nice guy that he is, actually gives him some. that’s basically the kind of movie this really is. strange in tone and ideas, but definitely funny. a similar moment happens when frank is wailing on jacques’ car and jacques tells him not to touch the car again. frank then puts his finger on the car, literally just “touching” it. instead of beating him up, like we would see happen in most other films, jacques just says, “that’s not the kind of touching i was talking about. i’m outta here,” and drives away.

the thing is, unlike most movie villains who are pure scum and go out of their way to find guys to beat up, this villain jacques actually seems like a nice guy. at least at times. certainly by the end of the movie he has proven himself to be an absolute dirtbag, with the way he treats sarah, but in his approach to backing away from confrontation, he is actually a lot of fun. credit that to kevin bacon, who is no stranger to playing bad guys (sleepers), or playing bad guys in super hero movies (x-men: first class). bacon has a lot of fun with this role and we appreciate his way of getting creative with it.

frank has a strange experience one night where he is visited by a sort of creature from outer space. it’s never made clear if it is god, or an alien, or just a total hallucination, but frank comes out of the experience very changed. in that moment, something cuts his skull cap off, opens up his bed, does something to his brain, and then puts his skull cap back on. and it’s after this that frank decides to dress as a super hero and put crime in it’s place.

one thing pretty cool about this movie is that right at about the halfway point, when maybe it is starting to run out of momentum with the simple frank-jacques-sarah love triangle, the movie brings in a new character. and this new character suddenly has a major part, infusing the movie with all sorts of rejuvenated life and energy. that character is libby, (played by ellen page), a girl who works in comic book store. she’s the one frank goes to for a superhero consultant when he is originally looking for ideas on how to be a superhero. i like the way that libby takes frank around the store, discussing all sorts of heroes from comics with him and how to go about doing it without actually having any powers.

libby becomes frank’s only friend, to the point where in a moment when he gets shot, he shows up at her place for help instead of a hospital. she is thrilled to see that he is the superhero she has been reading about, and decides to become his sidekick. libby becomes boltie, sidekick to frank’s superhero, the crimson bolt. ellen page is a really fun actress, brining humor to any role she takes on. you can tell that the chracter she plays here, just like the one she took in juno, is probably not all that far off from the way she is in real life. an indie kind of nerdy girl who doesn’t hesitate to get down and dirty with the boys. she did the same thing in inception, being the only girl on that team of guys.

super works for a lot of reasons. the humor is pretty great. frank keeps things simple, telling bad guys who he has just beaten up, “don’t molest kids,” or “don’t steal.” he says things like, “shut up crime,” and beats a guy pretty badly for cutting in line. i like the places where this movie goes in it’s second half, having an unusual love scene between two of the characters, and then sending another one to an early grave. the movie is certainly dark. the action could have been better, but the movie wasn’t really trying for that. as a satire, this one works out well. i also like the way it avoids happy endings, trying to make us believe that these might really be the results if something like this were to actually happen. it’s a pretty cool film.