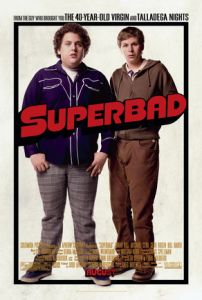 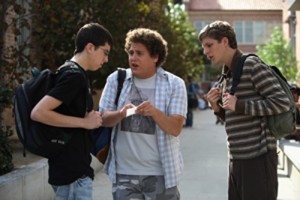 In 1999, the movie american pie came out and everyone embraced it because it was a movie about teenagers and sex and didn’t shy away from what was on teenager’s minds. the movie wasn’t just another sweet romance, but actually dared to give us gross out moments, such as a boy humping a pie. still, there was something missing. these teenagers just weren’t quite raunchy enough. they were holding back. superbad is the movie that tells it like it is. it’s the real american pie, unafraid of anything. it’s characters curse at teachers, not in a disrespectful way, but in a “this is just the way i talk.” kind of way. When jonah hill’s character, seth, tells his home economics teacher that everyone knows the class is a joke, he is not saying it to be mean, but saying it because it is true. that’s basically the mentality of this movie. keep it real.

the movie is about two friends, seth and evan (michael cera in his breakout movie role.) The storyline follows them during the course of one day and night, starting with seth picking evan up for school in the morning, and ending with the morning after a wild party. the party is the climactic scene, which sounds formulaic and like other movies, such as can’t hardly wait. but what makes this movie unique is that this is not the final party of the year or the senior prom or anything like that. in fact, at the start of the movie, the characters don’t even know about the party yet. this is just a regular friday, which happens to be towards the end of the year.

the boys stop off at a convenience store before going to school, and they are talking about their past sexual conquests. while having all of these conversations, they also drop in movie references every now and again, to keep this movie relevant for the fanboy culture that america has now become. they mention the coen brothers and disucss how orsen welles peaked too early in his career when he made citizen kane. these are references that not everyone will get, and i love that the movie is not afraid of that. any film could make a reference about titanic or some other mainstream movie, but superbad is a judd apatow film and as such, it knows the conversations smart kids who watch a lot of movies might actually have (like the characters talking about total recall in knocked up.)

we follow the boys into school and get a little break from all of the conversations about hand jobs and blow jobs. at least for a little while. we watch them interact with girls in class. evan has a crush on a girl named becca and she catches him staring at her boobs in class. they talk by the lockers and he tries to give her a friendly punch on the arm, but ends up hitting her boob instead. all of this would be stupid if the reactions weren’t so damn funny. when he’s caught staring at her, evan pretends he was just looking around the room. and when he hits her boob, the two of them both freeze up, as if they can’t believe that just happened.

seth, meanwhile, is partnered up with jules (emma stone, in her breakout movie role), the girl he is interested in, for their home economics class. he has a hilarious montage where he pretends to be doing things to her, behind her back, often using the cooking supplies to help him. we also get to see each of the boys in gym class. and we meet foglle, (Christopher mintz-plasse), a nerd who they are friends with, who thinks he’s pretty cool. this guy is getting a fake id after school today and is very excited about it.

the real plot to the movie starts to unfold when jules tells seth that she is having a party tonight and invites him. then she asks him if he can use the fake i.d. to get alcohol for the party. suddenly seth feels like jules has entrusted the entire fun of the party to him, and so he and his friends set out to get alcohol and use foggle’s id. only one problem…the name he gave is mclovin. actually there are a few problems, such as the age he gave, 25. and each of these problems gets discussed and ridiculed. the conversations in this movie are absolutely brilliant. for everything that seth can ridicule about foggle’s id, he has a reason to go with it for why he made it this way. and the arguing is a lot of fun.

fogle tries to buy the alcohol for the party, only things go horribly wrong and he ends up with the police. but from there, this movie tries to break the mold. foggle doesn’t find himself being taken in by the police, brought to jail, or anything like that. instead, he becomes friends with them and rides around with them for the night. they go after drunks causing disturbances, race around parking lots, and even have shoot outs.

meanwhile, seth and evan have also gone on a strange path. since they were unable to get their alcohol from foggle, they are willing to try anything, including going along with a strange guy to a party where he insists they will be able to get alcohol. only no sooner do they set foot into the party, do they find out that the guy who brought them there wasn’t invited and is actually getting beaten up. it really is one crazy situation after the next, only the thing that makes it work is that there are no gangsters or criminals here. this isn’t date night or adventures in babysitting, where regular characters get involved in things that are way above them. instead, this is a movie that keeps the problems as close to real as it can. the cops aren’t assholes trying to arrest people, for example, but are just regular guys trying to have fun and be young again.

superbad might be part romance, but it is much more about interactions with friends and talk about sex. the movie was written by seth rogen and his buddy evan goldberg, and they really did a fantastic job crafting this dialogue and script. and the casting of every role is right on the money. jonah hill handles the material flawwlessly. he really does carry the movie, although michael cera and christopher mintz-plasse are both great two. the cops are kind of second rate, which is fine, since they are not the main characters of the film. but even for those roles, some very talented actors fill the jobs. seth rogen and bill hader. the plot of superbad might end up being just another teenage movie that ends with a party, but it’s the journey to get there that makes this movie so much fun. the dialogue and ideas here are very creative and very funny.