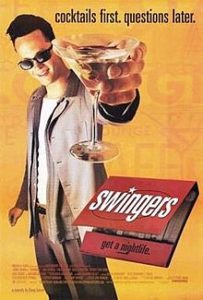 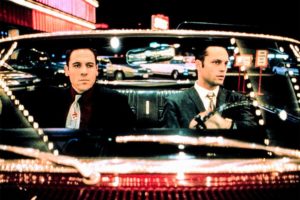 A hilarious and very smart movie that looks at dating and the single life from very real perspectives.

An outstanding movie, Swingers is comedy gold when it comes to dating and the single life. This movie examines a guy’s perspective on the situation from all different angles. That includes the lonely guy who needs to be in a relationship to get his confidence back, (Mike,) as well as his pack of friends who have metaphors and speeches for all elements of the game, (the bunny rabbit and bear, the PG13 vs rated R guy.) But dating is only a part of what’s going here. There are also plenty of conversations about jobs and friendships. This one is a black comedy about a guy who is down on his luck and depressed. And the idea to structure the whole movie in just three nights keeps the pace feeling fast and lively at all times. There’s great writing here, and the comedic actors hit every beat just right.

Swingers is a perfect movie about the world of dating from a guy’s point of view. This is the ultimate movie about guys in their twenties, trying to figure things out. That includes friendships, job opportunities, and especially girls. It’s a movie about a group of friends living in Los Angeles in the nineties, who are all trying to make it in the acting industry and not having much success. And it’s about the love life of one of those guys, Mike (John Favreau,) which goes through different waves in this film including really high highs and really low lows.

The beautiful thing is, that despite these extremes which make it sound like the movie covers relationships over a long period of time, the whole thing really takes place in just three nights. That’s it. We have the first night in Vegas, the second night that ends with Mike at his lowest point, leaving message after message on a machine, and the third night which ends with success. In between, there are scattered daytime scenes here and there, like Mike getting food at diners with his buddies, or playing golf with a friend. But the movie primarily takes place at night. That’s where all the fun happens.

The screenplay for this film was written by John Favreau himself, and it was the breakout movie for both he and Vince Vaughn. It is also the best thing either one of them has ever done, (Favreau directing Iron Man is his second best.) But this movie just hits everything out of the park. Every conversation is funny and clever and helps advance the storyline. Even the characters are all realistic types, (although they might seem a little extreme,) who are being themselves around their friends, while putting on a bit of a show in front of the girls they come across.

The movie opens with Mike and his friend Rob (Ron Livingston, who would go on to become the star of Office Space,) sitting at a diner, discussing relationships. Mike has been living out in L.A. for six months. He used to live in New York. Back there, he and his girlfriend, Michele, broke up, and Mike moved out to L.A. to be an actor. Only he’s still not over Michele and wonders why she doesn’t call. The opening conversation introduces us to all of this and also offers some pretty deep insight on the situation. Rob tells Mike that there’s nothing Mike can do at this point to get Michele to call or to want him back. All he can do is forget about her, or pretend to forget about her. They talk about how pretending to forget about her will eventually turn into really forgetting about her, and about how somehow women know not to call until you’ve really forgotten about them. The way this conversation flows is so spot on, it’s “money,” (to quote the movie,) and this includes characters saying something and then the other character asking “what do you mean,” to get more clarification. It happens twice, and it’s great, because the audience wants to know more as well.

From this diner scene, we go to Mike’s apartment, where it is now nighttime as he walks in to check his messages. Nearly every one of them is someone asking him whether or not Michele called yet. It tells us that he probably has the same kind of conversation we just saw, with every one of his friends. Mike calls his buddy Trent (Vaughn,) and Trent lays out different options they have for going out tonight. At that point, Mike bluntly analyzes the situation. They can spend all night driving around the hills, looking for great parties, only to find one that isn’t really so great, where a bunch of guys are hanging around one girl, and “I’m supposed to be all happy because she’s like wearing a backpack.” All of this is great. It’s real. Girls at parties used to wear little cute backpacks that were just big enough to be the size of a purse. And Mike is right about all the guys surrounding one or two girls. We see it at a casino bar scene coming up, where the guys go to meet their dates and have to walk through a crowd of guys who have circled around the women, just to get near them.

When Mike analyzes the situation about going out, in this way, Trent realizes either that Mike is right, or just how badly his friend needs to get out of town, (most likely it’s the later,) and so he tells Mike, right then and there, that they are going to Vegas. Mike objects, but moments later finds himself in a car driving to the city of lights. And the scene at the casino that follows is just comedy gold. Mike only wants to spend $100, but Trent pushes him to double down and the results do not go in his favor. And at the same time as Mike and Trent are trying to hide their frustration with losing a lot of money, they are trying to save face and look like big shots so they get comped free stuff by the pit boss.

It all leads to the two friends taking a bad situation and making it work as they pick up two casino waitresses and go back to their trailer home. And the laughs continue with Trent’s audition story and Mike’s need to check his messages. And this ends the first night. It has so far been all about setup, seeing that Mike is so heartbroken he can’t even focus on the girl in front of him who is clearly into him. From there, things are about to get worse.

The second night is the one where we really see these guys going from place to place. This is their usual routine, starting at Sue’s house (one of their friends, who has been named after the Johnny Cash song “Boy Named Sue,”) okaying some NHL hockey on Sega Genesis. And they even get into the video game, showing us instant replays where you can rewind it yourself, or how the right combination of buttons can be used to make the players fight and make each other’s heads bleed. All of this is great. It’s a perfect way to begin the second night.

And like the first night, there are both highs and lows. With the first night, the high was going to Vegas, the low was losing money, the high was picking up two girls, and the low was Mike bring two hung up on his ex girlfriend to focus on the new girl he had a chance with here. The second night also involves Mike getting a girl’s number. Only with this night he is uncertain of himself and needs a pep talk from his friends about how he’s “so money,” and like a bear trying yo figure out what to do with his claws as he tries to catch a bunny rabbit. There’s also the talk about the PG13 guy versus the rated R guy. This is all great writing.

And this is the night that ends with disaster. It includes a gun coming out, (briefly,) some harsh words from one friend to another, and the Mike leaving messages scene that is the low point of the movie. And then there’s the final night of dating, where Mike goes out there just bring himself and find a girl who matches with his personality nicely. He hits it off with her, and makes every move right. And this movie uses everything Mike learned (the bunny rabbit speech, the earlier conversation about how many days to wait before calling,) to make him successful now. In the end, it’s Mike who figures things out, and his friends who start to look like fools (Trent has two diner scenes which illustrate this point, one with s dance on s table and another with a baby.) It’s all pretty great. The story is fun, the writing is smart, and the humor hits every nite just right. What a terrific movie!