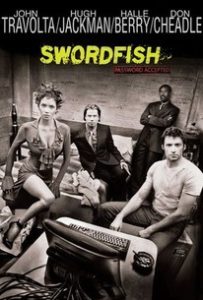 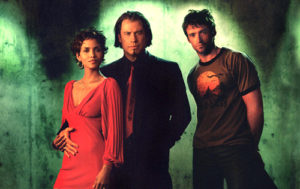 Great energy and artistic style go a long way, but in terms of plot and execution, this movie turns out to just be okay.

Swordfish is a decent action movie. It definitely has some things to offer in terms of style and feel. This is the last of those orange filtered action movies from the late nineties – early two thousands (like The Rock and Con Air,) and thsnkfully it does contribute some fresh ideas to the short- lives craze. But the plot is a little all over the place (dull in terms of the story we understand and ridiculous in terms of the story we don’t.) The action is sometimes fun and the look and energy are great. Sometimes that’s just enough to make the film kind of fun.

Swordfish just might be the last good John Travolta movie. And it’s hardly anything great, but at least this was a memorable and fun film. It had style and pizazz. In a sense, this wasn’t just the last good Travolta movie, but also the last of those overly stylistic (and overly orange) sleek action movies that were produced by Jerry Bruckheimer and often directed by Michael Bay. Granted, this one was produced by Joel Silver, not Bruckheimer, but it was directed by one of those orange movie Bruckheimer directors, Domenic Sena (who had just done Gone In Sixty Seconds for Bruckheimer.)

When we talk about those orange-filtered, over the top, but fun as hell action movies, we’re talking about Bad Boys, The Rock, Con Air, Armageddon, and Gone In Sixty Seconds. These were movies from the nineties that cemented Nicholas Cage as an action star, (and also perhaps limited him, so that when the genre was done, he didn’t have many places to go.) The same can be said about Travolta (ironically the two of them starred together in Face / Off, an action movie from this time period, that was a John Woo movie, and not one of these Bruckheimer-orange movies at all.

For Travolta, he was riding that action movie craze just like Cage was, and with Swordfish, he got his third opportunity in a row to play a villain. Broken Arrow, his first, was also his best. Not that it was a very good movie, but the action and Travolta’s character were both a lot of fun. And the simplicity of the plot went a long way. With Swordfish, it’s tge exact opposite. Yes, the character is still kind of fun, but exactly what’s going on in the plot is anyone’s guess. Is Travolta a good guy, killing terrorists and working for the government, or is he a high tech bank robber. The answer seems to be both.

At the start of the movie, we get a flash forward to the big bank robbery scene. Only we don’t know that when the movie opens. Not only do we not know that it’s a flash forward, but we don’t even know it’s a bank robbery scene. Instead, the movie opens to Travolta’s voice over, and then fades in just slightly to show us the character sitting in a dark room monologing. He’s going off about the movie Dog Day Afternoon, talking about how even though it was Pacino’s best film, it still wasn’t realistic enough, because Pacino’s character, Sonny, never killed anyone. In a real robbery, if the robbers don’t get what they want, or have to prove to the cops that they mean business, they blow someone away.

The dialogue is pretty interedting.  Commenting on pop culture pieces of entertainment reminds me a little bit of Tarantino, (remember his Reservoir Dogs opening where characters sat around dissecting Madonna’s “Like a Virgin?”) And as soon as the Travolta character, Gabriel, finishes speaking, we pull back to see that he is in a coffee shop talking to Stanley (Hugh Jackman.) But it doesn’t stop there. The camera pulls back further, as they walk out of the coffee schop and onto the street, to show us that they are actually in the middle of a robbery. SWAT team members are everywhere, and it’s Gabriel who is running the show.

He and Stanley walk back into the bank, carrying the coffee, and we start to put the pieces together. The scene doesn’t give us much other than that Gabriel is the man in charge and that Stanley isn’t exactly thrilled to be there with him. But one other thing it does give us is a hostage being blown up in an explosion so big it tears through multiple city blocks. The effects during this scene are spectacular. They’re the best effects in this movie. And the bullet time work of putting the explosion into slow motion as it unfolds is clearly influenced by Matrix technology. But it works.

And from there, we get to the real story. Stanley is a computer hacker. He has been arrested in the past by Roberts (Don Cheadle,) for hacking into the FBIs database. Now he’s just a bum who lives in a trailer, drinks himself into a stupor, and Kong’s for being able to spend time with his daughter. But he can’t because his wife has custody and Stanley has no money. Without any money to take care of  his daughter, the courts have found Stanley unfit to see her. And so his daughter lives with Stanley’s dead beat ex wife and her porn king husband. And all this is backstory.

The real story is that Gabriel and his assisatant, Ginger (Halle Berry,) are trying to recruit Stanley to come and work for them. First, Ginger pays him a friendly visit. Then she offers Stanley a huge wad of money just to come and meet Gabriel. And during that meeting, Gabriel gives Stanley a challenge which involves a gun to his head and some serious hacking. This is basically the direction the movie goes in. Stanley starts doing more and more jobs for Gabriel while Roberts chases them around.

The problem is that the real plot never gets much deeper then that. Gabriel has secretive dealings and falling outs with government representatives who have hired him to do jobs for them (that terrorist killing stuff, that we never see but keep hearing about.) He gets attacked while driving, and seeks out the people who tried to have him killed. But all that doesn’t amount to much, other then giving us opportunities for action scenes, sprinkled about.

The same can can be said of the robbery, which comes back at the end. It’s different than anything we’ve gotten so far, (and it’s nice for one of these crimes in the movie to actually not be about computer hacking for once,) but she me of the things that go on during this robbery are beyond ridiculous. Let’s just say, at one point a bus is actually flown around in the air. At the end of the day, Swordfish doesn’t amount to much more then just a heavily sylyzed action movie. It’s definitely one of the weaker of those orange filtered action films, which helps explain why it came at the very end of the craze (this and Gone In Sixty Seconds were the weakest, and also the last of those films.) Still, as a guilty pleasure action movie that tries to be a little smarter and sleaker than most, this one deserves a lot of credit for effort. Say what you want about the plot, but the movie looks and feels pretty cool.