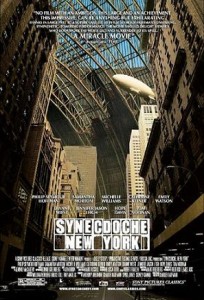 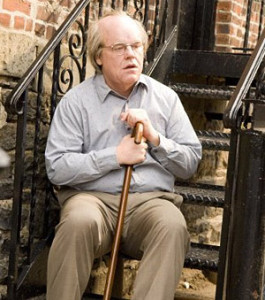 A very strange movie that is more fascinated by how weird it can be than about telling a good and complete story.

A hodgepodge of crazy ideas and not much self-control, this movie definitely has a vision. unfortunately, that’s about all it has. the first half is about a guy who is down on his luck in life, ditched by his wife and daughter, and sent from one doctor to another without any answers. that’s the part that’s okay. in the second half, we get the story about him winning a grant and building an elaborate set and stage piece, and the problem is this segment is in no way explained. it’s the heart of the movie, or at least it’s supposed to be, and we have no idea how or why it comes about, or even how it all works. it’s like the movie is composed of one complex idea that was never really thought out or fully realized. there are so many directions this movie could have gone that would have made it better, and it’s a real shame that it doesn’t do any of them. instead of making any choices, the movie is content to just be, and as a result, it ends up being a mess. charlie kaufman’s ideas are weird enough, but this movie is his ideas with no restraint or rationality at all. the results are pretty ugly.

Charlie kaufman is a weirdo. we all know that, and it’s a major reason why his films tend to be so great. kaufman is the screenwriter behind the movies being john malkovich, adaptation, and eternal sunshine of the spotless mind. each of those films is absolutely crazy in it’s own unique way. synechdote, new york, is crazy too, but it’s not nearly as captivating or compelling as those other movies are, and there’s a pretty clear reason for why.

unlike those other movies, something pretty major has changed here. with all of those other films, kaufman was merely the writer. this time he’s also the director. there is no lid on his insanity box, and so anything goes, even when it doesn’t make any sense or add to the film at all. an example of this is that there is a girl named hazel (samantha morton) who caden (phillip seymour hoffman) dates. hazel lives in a house that is always on fire. now that’s one of those crazy choices and there are two ways to go with it. in the hands of another filmmaker, the burning house would still exist from kaufman’s screenplay, only where it ended up would be very different.

the two places where the burning house could go are either the movie can recognize that the house is on fire and offer up some kind of explanation, or not recognize it at all. for the explanation, maybe they could say that it’s a fake fire, or that somewhow the fire will never burn the place down or be harmful in any way. the other option is that the movie can not acknowledge the fire at all, making us wonder if it is even really there or just a hallucination of sorts. that’s probably the way most movies would have gone with it. only this film doesn’t take either path. it recognizes the fire and has characters comment about it, but never offers us any kind of exaplanation at all. what’s the point of having it and pointing out to us that it is really there and in no way a halucination, if they’re not going to give use any reasons for how it could possibly exist?

the movie is filled with little things like that. it starts off promising enough with caden having a hard life, filled with resentment from his wife (catherine keener), and lots of injuries. he sees all different doctors who keep sending him to someone else. this is a running joke, and it’s pretty funny. the stuff about his daughter’s poop, however, is just gross. what’s with phillip seymour hoffman and starting movies with things like this? his movie the savages had something similar at the beginning of it, also grossing us out early on.

caden’s wife leaves him to travel through europe with their daughter, and she never comes back. it’s strange that she doesn’t even ask him to go with them, to begin with, and i like the way he calls her on this, asking what it all means. he doesn’t really get much of an answer though, other than that his wife wants some alone time with their daughter, and the next thing you know, they have been gone for years and years without even a word back to caden of where they went.

the main idea of this movie is that this playwright, caden gets a huge grant and designs a giant set with it. the problem is that this stroyline doesn’t really even get started until the second half of the film. until then it’s either watching haden at home or watching him at work, choreographing a show that stars michelle willimas. the stuff with the wife leaving in the first half is interesting, but other than that, everything that happens is pretty dull.

the second half isn’t much better. this is where caden decides to use the grant money to build his set. he rents out a giant armory and has a replica of manhattan built. then he populates it with actors. there are many problems with this and the movie leaves more questions than it does supply answers. first off, where does caden get the idea to do this from? how does that idea develop? part of the fun of this movie really should have been the formulation of the idea. even just a single conversation where he proposed to someone, “what if we made a…” would have offered up some sort of an explanation about it.

another unanswered question is what the actors are doing all day on the set. we know that the set and streets are supposed to be like real life, and so there is no script and actors just carry on conversations with each other while in character, but what are these actors doing besides talking? maybe we should watch them in their homes, taking naps, lying in bath tubs, and eating at restaurants? does this model city even have restaurants? considering that it seems to be a replica of new york, i would think that would be one of the major components.

the unanswered questions is just part of the problem. another one is the way the movie really wants to present us with a character of a character of a character towards the end. so, for example, haden gets a guy to play him (i do like the idea that this guy has been following him throughout the movie, learning his every move), and then that guy becomes a director on the set and gets another actor to play him. so now the first actor is directing, becoming haden in that way too, taking over the director job. similarly there at least three versions of the hazel character. it becomes a little much.

there is no question that synechdote, new york is ambitious. it is a movie that definitely has ideas. the problem is that kaufman doesn’t know how to direct and how to keep the audience grounded. there needs to be some give and take and some balance to all of the weird. in this movie, there really isn’t. sure the ideas are cool, but the path that weaves them all together is a bit of a mess. some scenes stand out as better than others, and other scenes just leave us scratching our heads wishing we got some answers. such a scene comes when caden goes to visit his now adult daughter in a strip club. is this even his daughter at all? the movie gives us no way of knowing. there was definitely potential here, but as a first time director, charlie kaufman does not know the difference between cool and creative strange and being so strange that it makes the audience tune out. knowing that difference and having directors who knew how to channel kaufman’s ideas is the very reason why all of his other films worked out so well.