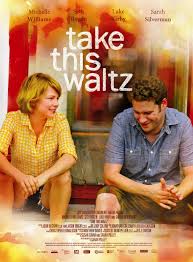 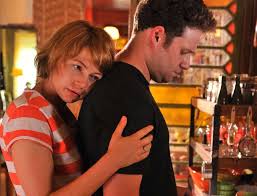 An okay movie that is artistic and interesting most of the way through, but is easily forgettable by its end.

Take This Waltz is the same kind of movie we’ve seen over and over again. it’s a romantic drama about a married woman who starts to have feelings for another man. The movie has Seth Rogen and Sarah Silverman in it, and yet it’s not a comedy. this isn’t even a black comedy. what the hell? that’s because the movie is trying to do drama and to give these actors an indie movie to play around in. unfortunately, it’s not very interesting or unique. for a while the movie is okay, as we don’t know where it’s going and might be a little curious. once it is revealed that this film has nothing new to offer, however, we realize it was a mistake to go in with any hope at all. this is routine stuff. it’s worse than a romantic comedy with the same story, because this film isn’t even funny. When an interesting idea is hit upon (Silverman having a problem), it lasts for all of one quick scene. that’s basically a metaphor for the entire movie, which just doesn’t know how to give an audience what they want.

Take this Waltz is a movie that seems to have Potential going on until about halfway through, when you realize the movie just isn’t working. that’s because it really doesn’t go anywhere or do anything all that interesting. it’s the movie of a married woman who falls for another man and has an affair. how many other movies have we seen exactly like that? how do you even make a story like that interesting when we’ve clearly seen every Possibility a ton of times. the woman gets caught, the woman doesn’t get caught, the man is having an affair too, the woman leaves the man, the man leaves the woman, or the man never finds out. it’s all been done before.

the good news about the movie is that it is so well cast that we want to spend time with these characters. the actors here are all giving it their best to make this stuff work. Michelle Williams is always interesting, even when the movie around her isn’t. here she plays a quiet, uncertain woman, who knows what she wants, but not how to handle it. Seth Rogen is her husband, a strange and kind of boring guy who writes about cooking chicken.

Then there’s the guy who Margot (Williams) falls for. This is Daniel, played by Luke Kirby, and he is pretty charming. Daniel uses humor, confidence, and a Poetic way of speaking to entrance Margot. Sometimes he’s doing the usual arrogant guy thing, like when he first meets Margot as she is helping reenact something from history. but most of the time he is just being himself and putting things into the perfect words. This is the case, for example, in a scene where Margot asks him what he would do with her and he goes on to describe it in fascinatingly clear detail.

There’s also Sarah Silverman on hand here in a supporting role. She plays the sister of Lou (Rogen), and Margot’s friend. I’m not really sure what Silverman is doing here, other than it’s the chance to act in a drama that will take her seriously. Still, Silverman is a stand up comic and a funny person. that’s when she’s at her best. Here, her presence is just strange. She does have a full frontal nude scene, which also seems to the point that she wanted to be in a movie that would take her seriously, the same way Marissa Tomei was when she acted in Before The Devil Knows You’re Dead (for which she had many nude scenes), and Halle Berry when she starred in Monster’s Ball (also many nude scenes.)

so the cast is good, but the story really isn’t. it’s just the same old thing we’ve seen before. The only real reason I saw this movie was because of Seth Rogen. he’s just such a witty, naturally talented guy that it seems like he just about always brings his ideas about what is funny to his role. That’s what I thought, after having seen him appear over the last two years in movies like the guilt trip and 50 / 50. both movies never looked that great to me from the trailers and both turned out to be very funny, with Rogen delivering his trade mark brand of slacker humor.

But I also forgot about some of the movies he made before that. Movies like funny people, Zack and Miri Make a Porno, and observe and report. just because those movies were a few years ago, doesn’t disregard them. the truth is Rogen is as capable of being unfunny as anyone else. especially when he tries his hand at drama, like he’s doing here. At the very least, Rogen should have only taken a role if it was a black comedy, like Adam Sandler did when he made punch-drunk love with director Paul Thomas Anderson. Rogen show know better than to think he was a serious actor. Look at what happened to Jim Carrey when he tried it for a few movies. people started to forget that they liked him as a comedian or in any way at all.

the first half of take this Waltz is okay, mainly because we don’t know where it’s going. we are on board for the ride hoping that somehow it can give us something new. As much as we know this is impossible, we still hope, thinking why else would they be making the movie. who makes a movie just to do the same old thing? And I suppose they try, only not hard enough. For example, Sarah Silverman does get a subplot, and it is incredibly interesting, but there’s one problem. it only lasts for one quick scene.

That scene shows how her character, Geraldine, was a recovering alcoholic, and now gets back into it again. Something happens where she is supposed to be watching a small child, and she starts drinking, and ends up leaving the child and going out. the whole thing is more intense than anything else that happened in the movie. only we don’t get to see it. the only thing we get to see is the aftermath, when the Police show up at her doorstep to take her away. that’s because the movie isn’t about her. I understand that, but even still, they could have explored this subplot just a little more. especially since it was the most interesting thing in the entire movie.

there is also a fantastic scene that takes place at an indoor amusement park, on a single ride. the whole scene is played to the 80s song, “video killed the radio star,” and it is so well filmed, and so much about beautiful shots that go perfect with the music. this scene is clearly the most special and most memorable moment in the movie, but where was the artistic hand that shot it during the rest of the film? how is there only this one amazing scene in a movie that is otherwise pretty dull and lifeless?

Take This Waltz was directed by Sarah Polley, the girl who was an indie actress for a very brief period of time before she gave up an acting to try directing. her biggest role was in the movie go, but she usually made much smaller and quieter films such as the sweet hereafter. Polley was never anything special as an actress, and it doesn’t seem like she’s a very good director either. if she was, she might know that the first rule to telling a story is that it has to be interesting and different. this movie might go for realism, but what it should be going for is audience reaction. For example, with the Silverman scene, I suppose it is presented from the point of view of a character who just showed up there at the scene, and doesn’t know exactly what happened. But for an audience member, not getting to see what sounds like it might have been the most intense scene of the movie, is incredibly frustrating. That’s the problem with this movie. it doesn’t really know how to tell a story.