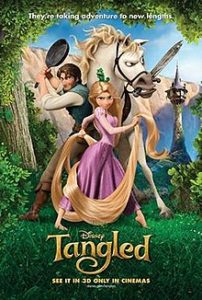 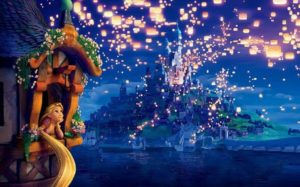 A pretty clever and entertaining movie, this one definitely has some flaws, but overall it’s a pretty fun experience.

This is a fun, action packed animated movie. Not exactly what you would expect from a Disney princess film, but this one has more action and better action than most of these movies. The story here is about Rapunzel trapped in a tower by a step mother who has her locked away so that she can use some magic in Rapunzel’s hair to keep herself young. And then a thief comes along and rescues Rapunzel, because she wants him to take her to see the annual flying lanterns show. It’s a fine story, although it does have quite a few plot holes or inconsistencies The humor is hit and miss. Most of it with the two protagonists works, but then you get things like a bar scene filled with a bunch of tough guys who act like little girls, and it’s pretty dumb. Still, overall this is an exciting and entertaining movie, with some real adventure scope, especially when it comes to the action. And the movie looks absolutely fantastic, every step of the way.

Tangled is the Rupunzel story brought to life as a Disney movie like no other studio could do. Disney makes the Princess movies and Pixar makes pretty much everything else when it comes to division of animation between those two studios, (which are both owned by Disney.) So Tangled falls under the Disney Princesses umbrella (the only exception to that Princess rule is Brave, which was actually Pixar.) Tangled is a pretty entertaining movie. It probably has better action sequences that any Disney or Pixar film yet to date, and that’s saying a lot, (I still love the end scene of Monsters Inc with the two protagonists climbing over ropes hanging from doors, and jumping from one door to the next.) But here, the action feels and looks kind of real. The graphics on these movies have gotten that good. And boy is it exciting.

The story here, well… that is just okay. The same came be said about the music. In fact, the music is pretty good, but it’s just not memorable. You don’t walk away from this movie still humming the songs, the way you do for a Frozen or Frozen 2. The songs here work in the moment, (mostly,) but once the moment is gone, so are they. That’s okay though. At least they work in the moment and are entertaining. And there are plenty of them, including a small song that Rapunzel sings every time she wants her hair to glow, (I suppose that’s more like the ancient wisdom jingle of “go too far and you’ll be drowned,” that is repeated over and over again n Frozen 2, than an actual song.) But there are plenty of songs in this movie, starting with one that Rapunzel sings when she wakes up in the morning, to take us over what her daily routine is like and all the different things she does. Good thing too, because a movie about a girl who spends her life locked up in a tower snd has never been outside would definitely get the viewer to question the believability of what she does all day every day. So this movie answers that question right away.

It also starts, even before the intro to Rapunzel’s daily routines, with Flynn Rider telling us about the legend of the Princess who was kidnapped and the golden hair of hers that keeps people young. The legend and introduction here are told with lots of humor, as Flynn’s voice over charms in on how this is not even his story, although he’s the one telling it, and talking to the audience about things like, “giving us a hint,” who the little girl was. The humor helps cover the fact that this legend doesn’t actually make much sense. A drop of sun fell from the sky? What? What does that even mean? And the sun fell to the ground and became a flower. Then the Queen drank the liquid of the flower and the magic went into her daughter’s hair?

I suppose it’s okay that it doesn’t make much sense, since that’s what magic and legends are, after all. Totally made up. And the movie does a nice job of rushing over the semi-explanations so that we don’t notice how ridiculous it all is. But if you stop to think about it, it’s also a little confusion. Like, “wait, so there was magic in the flower? And now it’s in the girl’s hair? And how did the old woman villain, Mother Gothel, know that it was in the girl’s hair when she broke into the palace, and that she could sing to the sleeping child and her hair would light up?” We are so distracted by the beautiful glowing hair, (and boy does it look amazing against the dark of night,) that we don’t notice the inconsistencies or irrationality of it all, as much as we probably should.

And now, spending time with Rapunzel and her sidekick, an iguana, (there are quick little jokes in here about him changing color,) we see how every year on her birthday, the King snd Queen launch a thousand lanterns into the sky and Rapunzel sees these from her window, and wants to know what they are. Mother Gothel tells her they are just stars. But Rapunzel knows better. “Why do they always appear on my birthday?” she wonders. A simple solution would have been if Mother Gothel just told Rapunzel she had a different birthday. Consider that Rapunzel would not have been old enough to really remember the lanterns until she was about three, at the earliest. So that’s already at least two years of Mother Gothel seeing the lanterns, and realizing what’s going on. But this movie is not about escaping plot holes. It doesn’t try to be. The early scene of Rapunzel’s daily routines is a step in the right direction, but other than that, the story here is definitely full of questionable ideas and actions.

But its not bad either. After all, when the things that don’t quite make sense mostly have to do with magic and spells, and it’s a Disney fairy tale, we can let it go. It’s just interesting to note how none of this would have happened if Mother Gothel had told her she had a different birthday. Or would it? Maybe Rapunzel would still have figured it out anyway. As it happens here, Rapunzel gets the idea that this year, for her birthday, she wants to go out and see the lanterns in person. And Mother Gothel shoots this idea down right away with a song called, “Mommy Knows Best.”

Meanwhile, Flynn Rider and two big, burly brothers, the Stabbington Brothers, (both voiced by Ron Pearlman,) are on a quest to steal the princess’ crown from the kingdom. And in Mission Impossible fashion – hanging by the waist from a rope that drops him down from the ceiling – Flynn does exactly that. This leads to a pretty cool chase on the rooftops of the palace. It’s the first great action scene of the movie, and boy does it look fantastic. When the three of them get away, Flynn betrays the brothers and runs off with the crown himself. And this is the guy who will be our hero… a guy who betrays his partners. Again, best not to think too hard about these things, and the movie bails him out on this one by making his partners bad guys. But then again, isn’t he a bad guy too – stealing the crown? Pretty soon Flynn finds himself alone in the woods, and then the knights of the kingdom find him and we get another action scene. And again, it’s great. In fact, this one involves one of the best single moments of the movie, when Flynn grabs a vine of a tree, swings around it, and comes back to where the camera is, (and also the head knight is on his horse,) kicks the knight off, and lands on the horse himself. It looks amazing. And even this horse becomes a character here.. Maximus, the horse who hates Flynn for most of the movie. In fact, many characters hate Flynn here, (the horse, the knights, the Stabbington brothers,) and there’s even a joke about that later on.

Maximus and Flynn duke it out over the crown, when it gets flung to a log, where it hangs over the edge of a cliff. And then they both fall of the cliff. Flynn gets the crown, but it leads to a chase, and Flynn finds Rapunzel’s tower, where he takes refuge. Until he is struck by Rapunzel’s pan, and thrown in her closet, unconscious. When she awakes, and after she has sent Mother Gothel off on a mission to get something for her, for her birthday, Rapunzel tells Flynn her terms, for giving him the crown back. She wants to see the lantern. She wants him to take her there. And so the two of them set off on their way. Now the mission of the movie has been established. And plenty of antagonists, from the knights to the brothers to Mother Gothel, have been established.

The journey takes these characters to a bar, where we get the silliest song and moments in the movie. All of these giant viking-like warriors break out into a song called, “I got a dream.” And then they help hide Flynn and send him through a secret door that leads to a tunnel. He and Rapunzel go through the tunnel and out the other side, and this leads to the next great action scene, which takes place at a dam. There are slides of water everywhere, and we get plenty of moments of Flynn going down these slides. And nearly everyone appears during this action scene, including Maximus, the knights, and even the Stabbington brothers. Even Rapunzel’s pan gets some action, and turns out to be a pretty cool weapon, Tribute to that is paid throughout the rest of the movie, and even appears in a nice joke at the end, with the knights of the kingdom.

After escaping the dam, Flynn and Rapunzel head to town for the night of the lantern festival, and the celebrations that proceed it. And now we are on our way, headed toward the conclusion. There’s a lot that needs to be resolved, including problems with all of these enemies. The way that the enemies handle Flynn and Rapunzel is pretty cool, (tying him to a boat, and pretending he left Rapunzel behind.) The way Flynn gets out of it all is pretty silly, (let’s just say he gets some help from some friends.) And in the end, we have a fun little movie that mostly works. It works because of the humor and the action, more than anything else. The story isn’t bad, it just has a lot to question. But there’s a lot to like here, starting with just the names of the characters… Mother Gothel (taken from the word Gothic,) and Flynn Rider – taken from the swash-buckling classic movie star Erol Flynn. This movie has some fantastic energy and really does look amazing every step of the way. And all of that makes for a pretty fun experience.