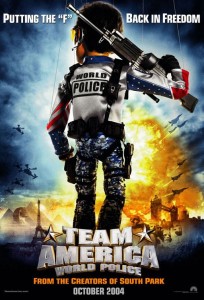 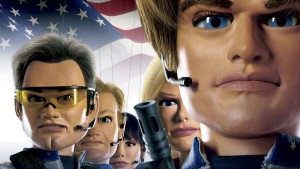 An okay movie that is funny at first, but then once you get used to it, you realize that it’s really just pretty dumb.

From the makers of South Park, Team America World Police is pretty much the same kind of thing. that jokes are mostly poking fun at real people or trying to make us laugh because they are using puppets in ridiculous ways. sometimes these jokes are funny, but just as often they aren’t. and the movie definitely goes for the gross factor and pulls off what it has set out to do. unfortunately, that’s not really a good thing. the premise is pretty simple and straight forward and is just a usual fish out of water story about a new guy who joins the team and then finds himself conflicted. some of the celebrity moments are good for a laugh (matt damon), and so are some of the songs, but for the most part this movie is just average. when the jokes misfire about as often as they hit the mark, you know it’s not a great movie.

Team America: World Police isn’t anything special, but it still has enough to make you smile quite a bit. that’s because even though it’s story is extremely simple and ordinary fare, the jokes are so many and so extreme that a bunch of them work. it’s a musical, like the south park movie, and also done by the same guys. the musical part makes a lot of sense since one of the strong suits of these guys is making a song that sounds serious and solemn, but ends up having very funny and unexpected lyrics.

the story is about a team of cia-like agents who are american, but patrol the world. their job is to stop terrorists and to use really big weapons in order to do so. the first scene of the film features an attack on paris where the team shows up in helicopters, jumps down to the ground and wrecks havoc on the bad guys. they do a nice job of defeating the enemy and rattling off funny one-liners, but they also destroy the entire city, including the eiffel tower and the leuvre. the funny part is that the team members don’t seem to notice or care. they intentionally shoot missiles at national buildings just because terrorists are in those buildings, and when they get the terrorists, they celebrate, not giving any thought to the destruction of the buildings.

this carefree and careless attitude makes the team an enemy of the world. i understand that people from other countries, such as Paris and Egypt would hate them (and the big picture is, hate america, the big country that doesn’t care about the little guys), but what i don’t quite get is all of the celebrities that join forces with north korea and basically support terrorists themselves. even still, it doesn’t really matter when you consider that the real reason for having lots of celebrities in the movie is to make fun of lots of celebrities. with that in mind, the only one who the movie truly makes fun of is matt damon. maybe michael moore as well, but that’s it. the rest are just there.

the premise of the movie is that a new guy, gary, is a broadway actor recruited by the team. that’s because they need somebody who they can dress up like a terrorist and who can act the part. gary is the fish out of water character who agrees to come on board and help the team. for all of that setup and initial premise, we don’t get a lot of training at all. there are no funny jokes about the secret ways of the hideout or anything. it’s too bad, because the opportunities are totally there, in a get smart kind of way. moments like the get smart scene where steve carrell had to get through lots of doors and had a different problem with each one.

instead, Team America really just wants to get to the celebrities and the enemies. that includes north korea’s kim jong il, who is the leader of all of the terrorists. the other thing this movie wants to do is get to the romance between characters. specifically it wants to have a sex scene with two puppets, and so it basically tailors a plot line around that idea. lisa is the attractive blonde of the group whos boyfriend is killed in the beginning action scene. she falls for gary pretty quickly after that. there is a terrific moment where she makes him promise something ridiculous in order to get with her, and of course he immediately does.

aside from lisa and gary, there is also sarah who has a cruse on gary, and then another guy on the team who has a crush on sarah. all of this is okay. it is probably more interesting in the plot than anything else, but that isn’t really saying much. the romance stuff really seems like filler to help the movie get through a middle act where nothing else is going on. the beginning brought gary in, and then the end has gary save the day, but in between, he just stirs up trouble with the romance stuff.

while some of the jokes definitely work, there are probably more that don’t. there’s a running joke about one guy going down on another, that actually becomes a reality. there’s also a really disgusting puking scene that is intentionally grosser than any puking scene ever put on film. and then there is a speech at the end of the movie about private parts that is probably more dumb than anything else. in fact, it is so dumb and ridiculous, that in some ways it does manage to be a litle funny.

the songs and the idea of using puppets are what really work. there’s a fantastic song about a guy missing the girl he loves, but not as much as the movie pearl harbor sucked. the entire song mentions pearly harbor, in pretty much every line, dissecting as many details about it as it can, including director michael bay, and ben affleck and cuba gooding jr.s roles. it’s funny because no matter how much this guy is in pain thinking about his lost love, he can’t stop thinking about how bad that movie was too. and the movie has nothing to do with anything that is going on.

the use of puppets is also pretty cool. one would expect more computer graphics work to make these characters move, but the south park guys, trey parker and matt stone, wanted to use puppets on purpose. they wanted to show us the strings moving the puppets as often as possible, and they also wanted the puppets to have to move in certain ridiculous ways. so when there is a fight at the start of the film, the puppets really just run into each other and flail their arms around. that’s all they can do, because they are puppets. and when that scene happens, where one guy goes down on another guy, as dumb as the scene is, the funny part is that for nearly the entire thing we are just watching the strings of a puppet.

if the story was better, this probably would have been a better movie. i’m sure the plot was intentionally weak to kind of make fun of all the other bad movies that have similar premises, but even still, it felt like they often were out of ideas. gary leaves the team and the team goes off and gets captured. meanwhile gary goes on a bender and becomes a bum at a bar. and then, of course, he comes back to the team to redeem himself. many jokes work, but then there are also a whole lot that don’t. it’s a mixed bag with this one, and worth seeing, but you can expect to be grossed out about as often as you will laugh.