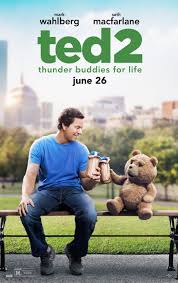 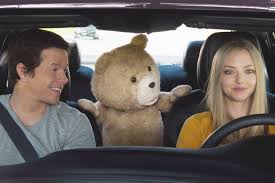 Whatever the first movie had going for it is lost here, in this movie that is more interested in being a repetitive and dull political satire than it is on just being funny.

Ted 2 is a waste. It’s a wasted opportunity and it’s a waste of a movie. It’s one more situation where the original movie was great, but the sequel just throws it all away. The problem is that the idea of the first movie was so fresh and creative that there’s just no way to top that. So this movie doesn’t even try. Instead, it is more like Mr. Ted Goes To Washington. The bear wants his rights and is willing to go to trial (two trials actually,) to fight for them. The jokes here are lousy and the storyline is extremely repetitive, recycling the same jokes again and again.

Ted 2 is lousy. It’s a real shame because the first movie was great. That film was all about this crazy situation, where a boy had a teddy bear come to life, and then that boy grew up and was still best friends with the teddy bear. Talk about an original and out there concept. For the sequel, there is really nothing new on the table. At least not anything of the same caliber that the first movie had to offer. This second film is all about civil rights and whether a teddy bear should b considered a person or considered property. It’s all pretty dumb and has a plot that goes nowhere fast.

At the start of the movie, we join John (Mark Wahlberg) and Ted for the marriage of Ted to his girlfriend and coworker, Tammy Lynn. The wedding is not very funny, and the only take away from it is that actor Sam Jones, who played Flash Gordon in that classic eighties film, is that one marrying them. The problem is, Sam Jones, and all of the Flash Gordon references, were already done in the first Ted movie. If they were going to do something like this again, about an actor from Ted and John’s childhood, they should have at least brought in a new long lost actor, like Chuck Norris or Dolph Lundreon.

The credits take place over a musical number of Ted dancing around with a bunch of guys dressed in suits. You can keep waiting all day for somehting funny to happen here, but the movie doesn’t even attempt humor during these credits. It is a total wasted opportunity. As soon as they are over, we check in with Ted and Tammy Lynn one year after they got married, and see how their relationship and marriage is falling apart. He is wearing a wife beater undershirt and sitting at the table barking orders while she is in the kitchen making dinner. Ted makes a few offensive comments and the next thing you know, she is throwing pans at him and they are in a major fight.

So what do they do? Decide to have a kid. I suppose its meant to be funny that they make this decision at this time, when things are at their worst between them, but it doesn’t really work. Ted and Tammy Lynn decide the best way for them to go about this is for Ted to get some sperm, and so he and John set out on a mission. First they go to Tom Brady’s house, dress as delivery men, and sneak around. That night, they quietly get into Brady’s bedroom, reach under the covers, and attempt to steal his sperm. It doesn’t go so well.

From there, the next step is to the sperm donor bank where Ted wants John to be the one to give his sperm. This leads to lots of unfunny jokes such as the two of them throwing sperm samples at each other. At one point an entire bookcase of sperm samples falls onto John with the samples opening and landing all over his body. It’s pretty disgusting, and not exactly top quality humor. We’ve seen sperm bank scenes before in other, better movies (like Road Trip.)

After the movie is done wasting our time with this sperm business, we find out that Tammy Lynn can’t get prenant. So all that sperm stuff was for nothing. Now she and Ted decide to adopt. Only there’s a problem. The law doesn’t consider Ted a person. Once that comes out in the news, Ted loses his job at the grocerey store and his marriage license to Tammy Lynn is revoked. Now Ted must go on a mission, with the help of John to prove that he is indeed a person, and has rights.

The implications and references to gay marriage and the rights of all people are used for fodder here. It’s not that it’s offensive (using the rights of a teddy bear to compare to gay rights,) after all, this director, Todd McFarlane, sets out to intentionally be offensive. So if you go in and find everything PC, then there are probably quite a few things that you missed. The offensive element is not the problem, just like it isn’t for the guys who make South Park. The problem is that none of this is funny.

The boys go and get an attourney who turns out to be a young, right out of law school, bosses daughter type, who is not very good at her job. This is Samantha, played by Amanda Seifried. She is a major stoner and Ted and John like her for only that reason. The liklihood that any person, let alone a lawyer, would pull out a bong and start smoking in the middle of a meeting, is ridiculous. But that’s the kind of humor we get here. At one point, John and Ted just start shouting out legal jargon, going back and forth, saying as many legal terms as they know. This is another example of the humor level and how low it really is.

The movie is like a revolving door of ideas that don’t stick. When the sperm stuff isn’t working, the film becomes about this trial and rights. When that doesn’t work, it brings in some villains who want to kidnap Ted, (just like in the first movie.) In fact, the references to the first film are so effortless that this movie even uses the same villain, (once again played by Giovanni Ribisi.) This time the climax takes place at NYC Comic Con (as opposed to the Fenway stadium ending of the first film.) It’s a cool setting for a climax, and I like the way Patrick Warbuton appears as a friend of John and Ted’s who goes to Comic Con just to beat on nerds. But we do find ourselves in pretty much the same plot as the first movie, and that’s a problem.

So is the way the movie uses the same jokes again and again. At one point Donny (Ribisi) wants to find out which Ted is the real Ted, so he starts singing a song knowing that Ted can’t help but chime in. Then just a few minutes later, Ted is looking at a bunch of men dressed as Ninja Turtles and starts playing a song, knowing that Donny will have to dance to it. The same joke twice in a matter of only minutes. Talk about recycling ideas. This movie even features a second trial, as if one wasn’t enough. That’s basically the story about this movie. Some occasional decent humor (although certainly not a whole lot,) and a storyline that feels forced at every turn. Without a creative plot, this movie should have never been made. Neither the jokes nor the storyline hold up the same way they did in the first film.